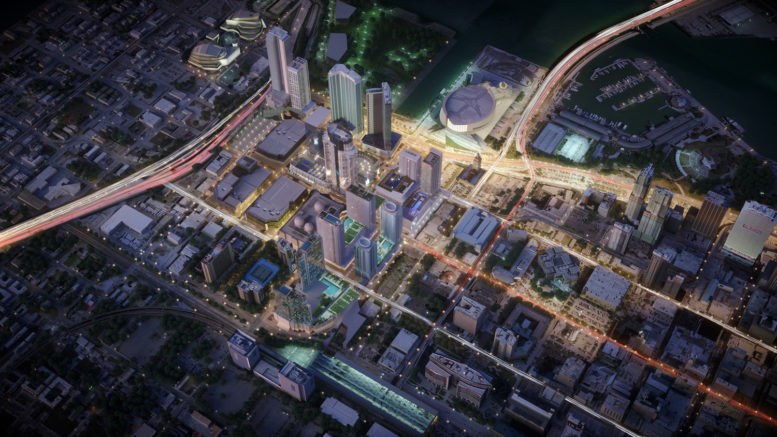 YIMBY recently went to check out views of construction from above Miami Worldcenter (MWC), a 27-acre world-class mixed-use development under construction in the Park West district of Downtown Miami. The $4 billion development, led and master planned by Miami Worldcenter Associates, a joint venture between master developers Art Falcone, Nitin Motwani and CIM Group, spans 10-blocks and includes immense residential, hotel, office and retail spaces across multiple buildings. The development stretches as far as Northeast 2nd Avenue on the east, Northwest 1st Avenue on the west, Northeast 11th Street on the north and Northeast 6th Street on the south.

Recent aerial photos from roughly 400-feet above via a drone scopes views of construction activity in and around MWC as well as surrounding buildings and neighborhoods. The photo below focuses primarily on the current tallest building at MWC, the 60-story Paramount condominium tower, which rises approximately 700-feet at 851 Northeast 1st Avenue, designed by Elkus Manfredi Architects with ODP Architecture & Design (ODP) as the architect of record. Further back from Paramount is a stretch of towers along Biscayne Boulevard which includes the famous One Thousand Museum, a 62-story, 707-foot-tall condominium tower. The stunning building was designed by the Zaha Hadid with ODP as the architect of record, and developed in a partnership between Louis Birdman, Gilberto Bomeny, Gregg Covin and Kevin Venger. The visible neighboring towers are The Gabriel Miami Downtown at 1100 Biscayne Boulevard, Ten Museum Park at 1040 Biscayne Boulevard and 900 Biscayne Boulevard. To the far left, you can see the Signature Bridge under construction beside the Interstate 395, where the yellow and red cranes are standing. Foundation work for Kobi Karp’s 51-story Legacy Hotel & Residences (bottom left) appears to have begun but is now halted following the recent purchase of additional parcels of land by the developer. 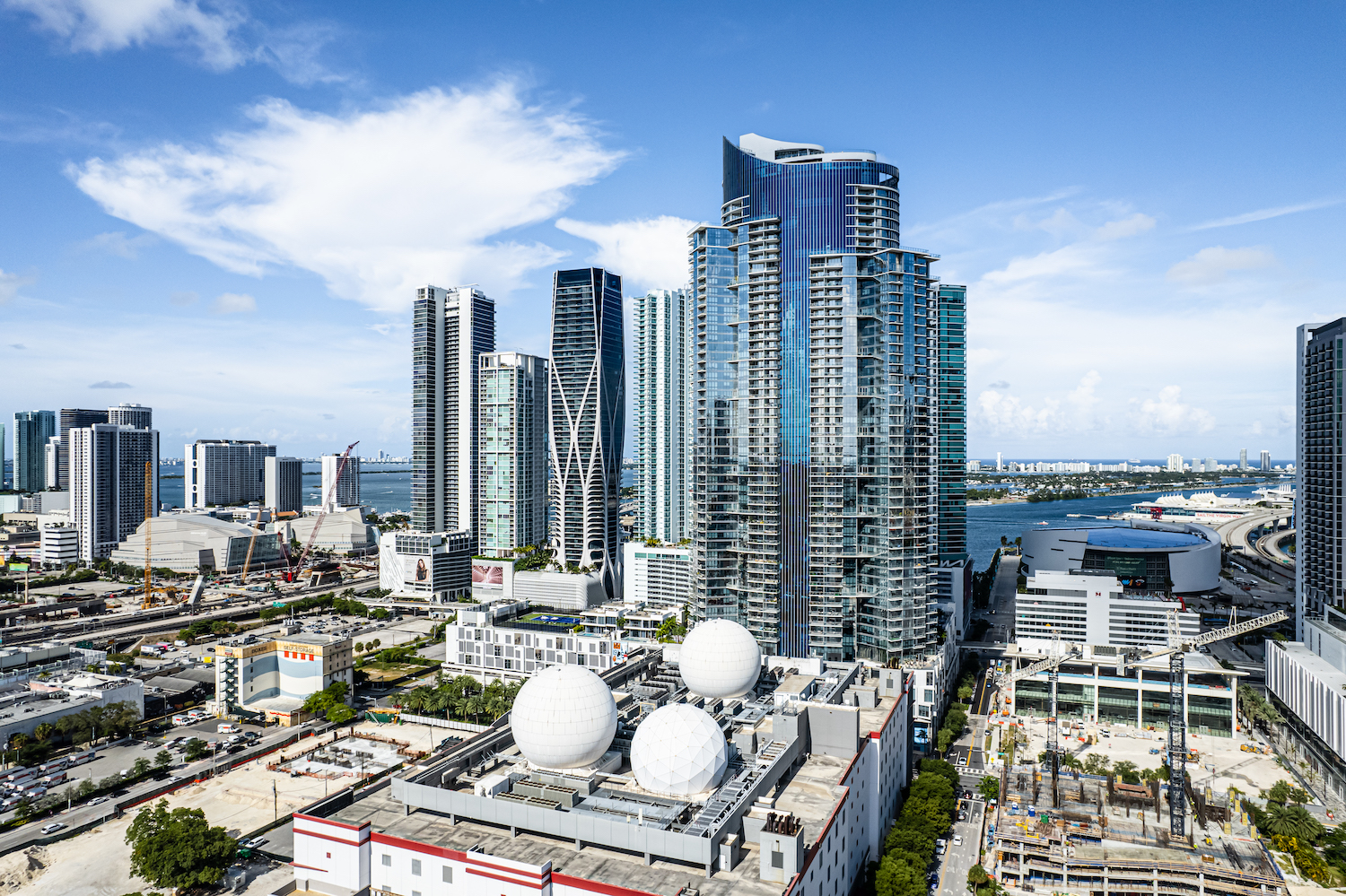 East-facing views with Paramount MWC and One Thousand Museum in sight. Photo by Oscar Nunez.

The next image faces directly north with distant views of Wynwood and Edgewater. Some of Edgewater’s most notable buildings are visible here, such as Elysee Miami and Missoni Baia. 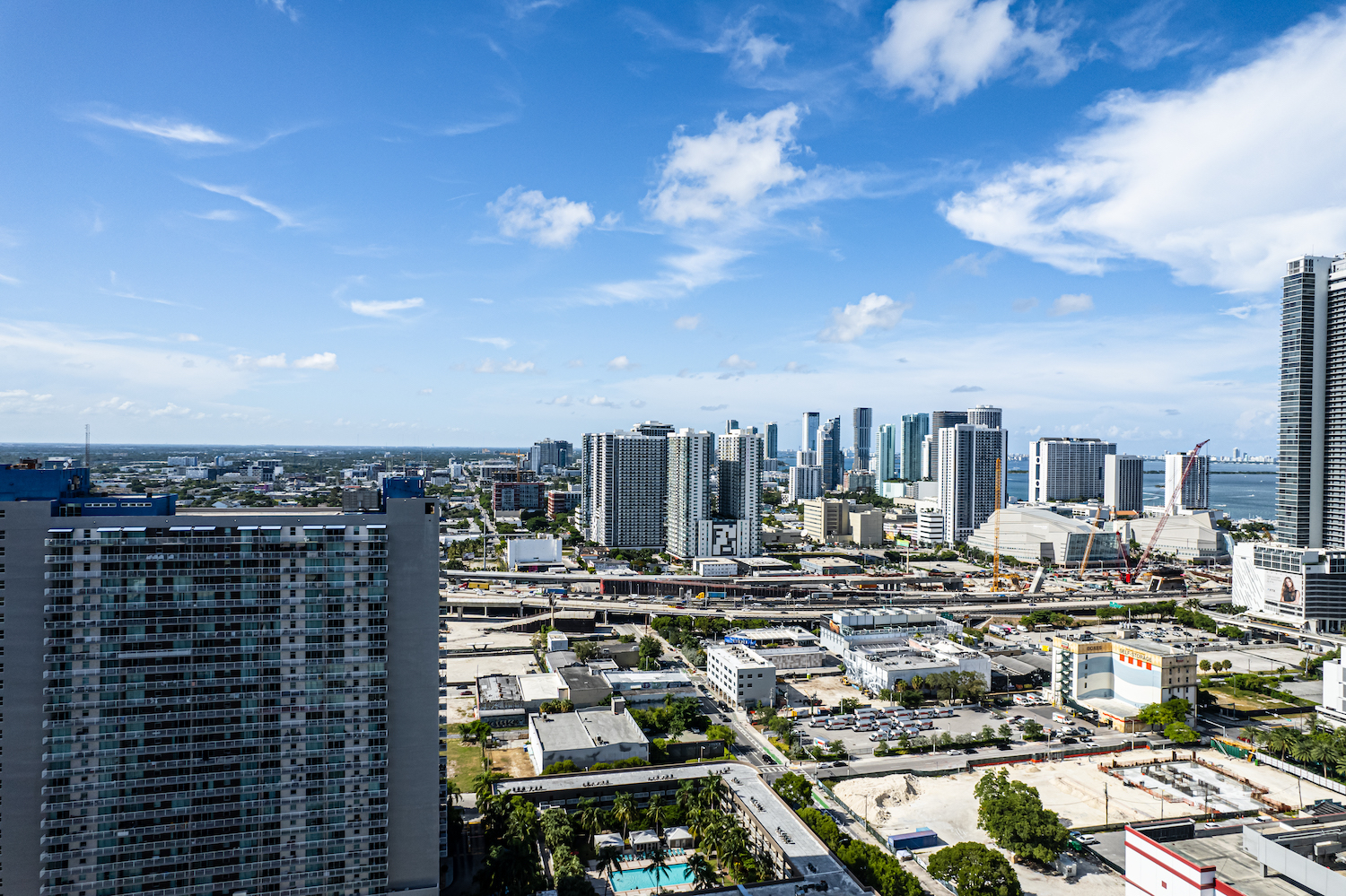 Towards the southeast, you come across Florida East Coast Industries’ MiamiCentral Transit Hub, designed by Skidmore, Owings and Merril with Zyscovich Architects, and Miami’s Government Center District. The new 23-story Miami-Dade Count Civil Court House is seen rising in the background, with about five stories complete so far. Melo Group’s 58-story Downtown 1st rental tower is the taller structure on the left end of the photo, which appears to be undergoing lots of exterior work at this point in time. 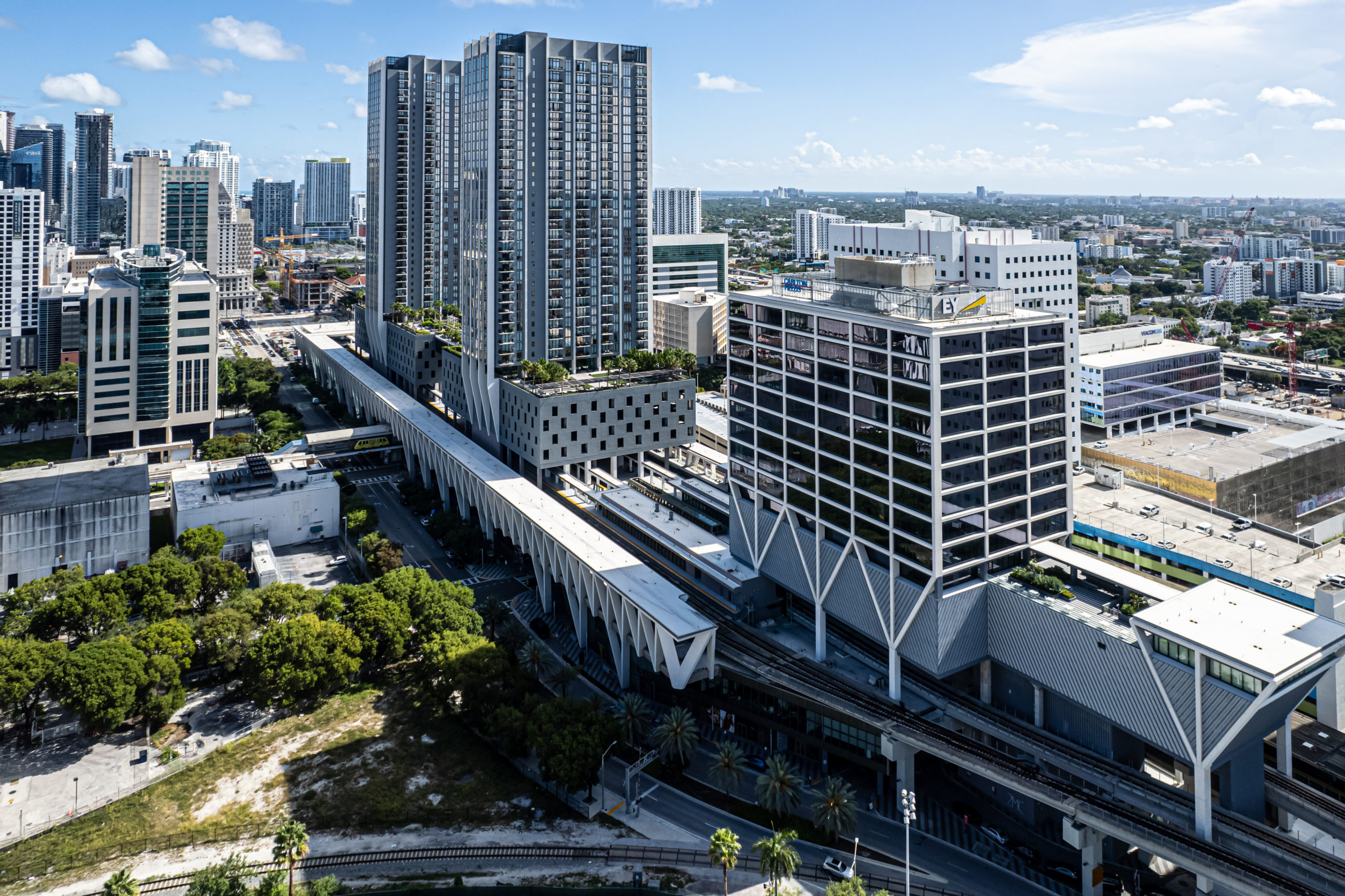 MiamiCentral and the Government Center District in the rear. Photo by Oscar Nunez.

One of the most active sections of MWC is Block G, where a second 40-story tower is on the rise, also referred to as Caoba Phase 2. The structure is off the ground and already several stories up, located at 697 North Miami Avenue. North of this property is Block E, where Lalezarian Properties is building the first phase of Miami World Tower, and the concrete shell is already a few stories up as well. To the south, the site of 33-story The Crosby is empty now and just needs tree and shrub removal to prepare for ground breaking. A tall crane and some excavation equipment sits within the site of the 70-story Okan Tower, expected to rise 902-feet, and Melo Group’s site for Downtown 6th is essentially cleared out too. 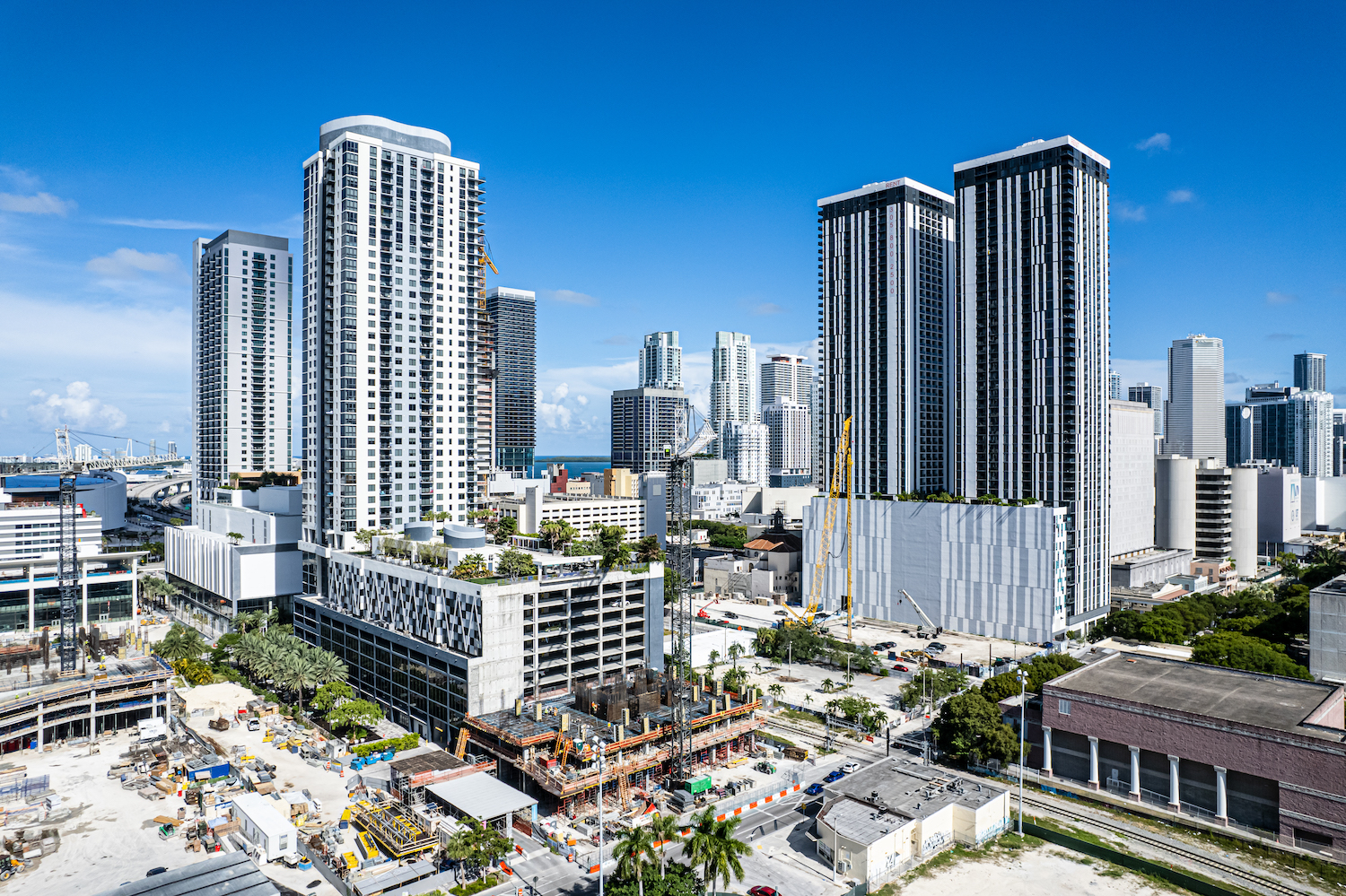 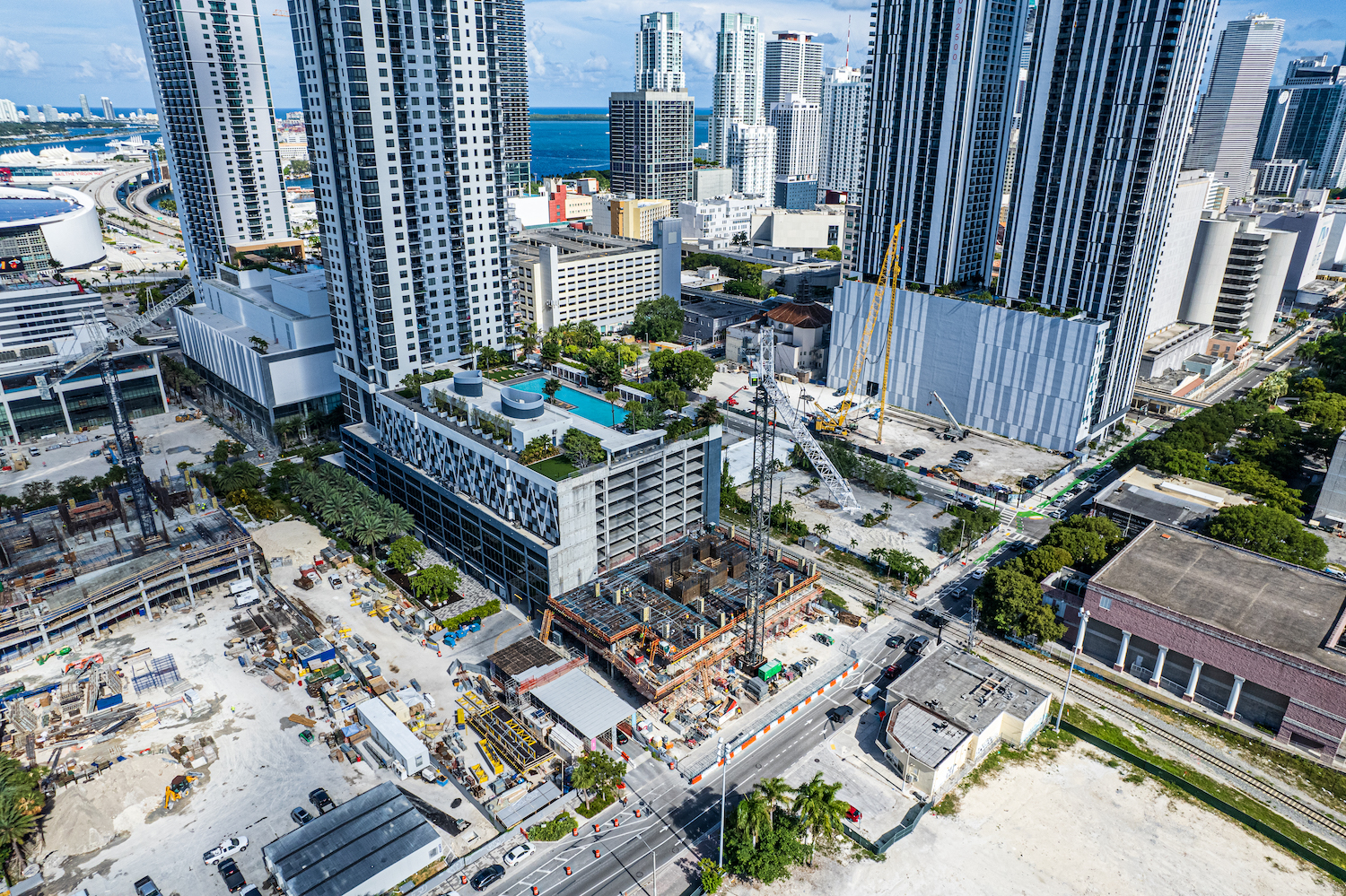 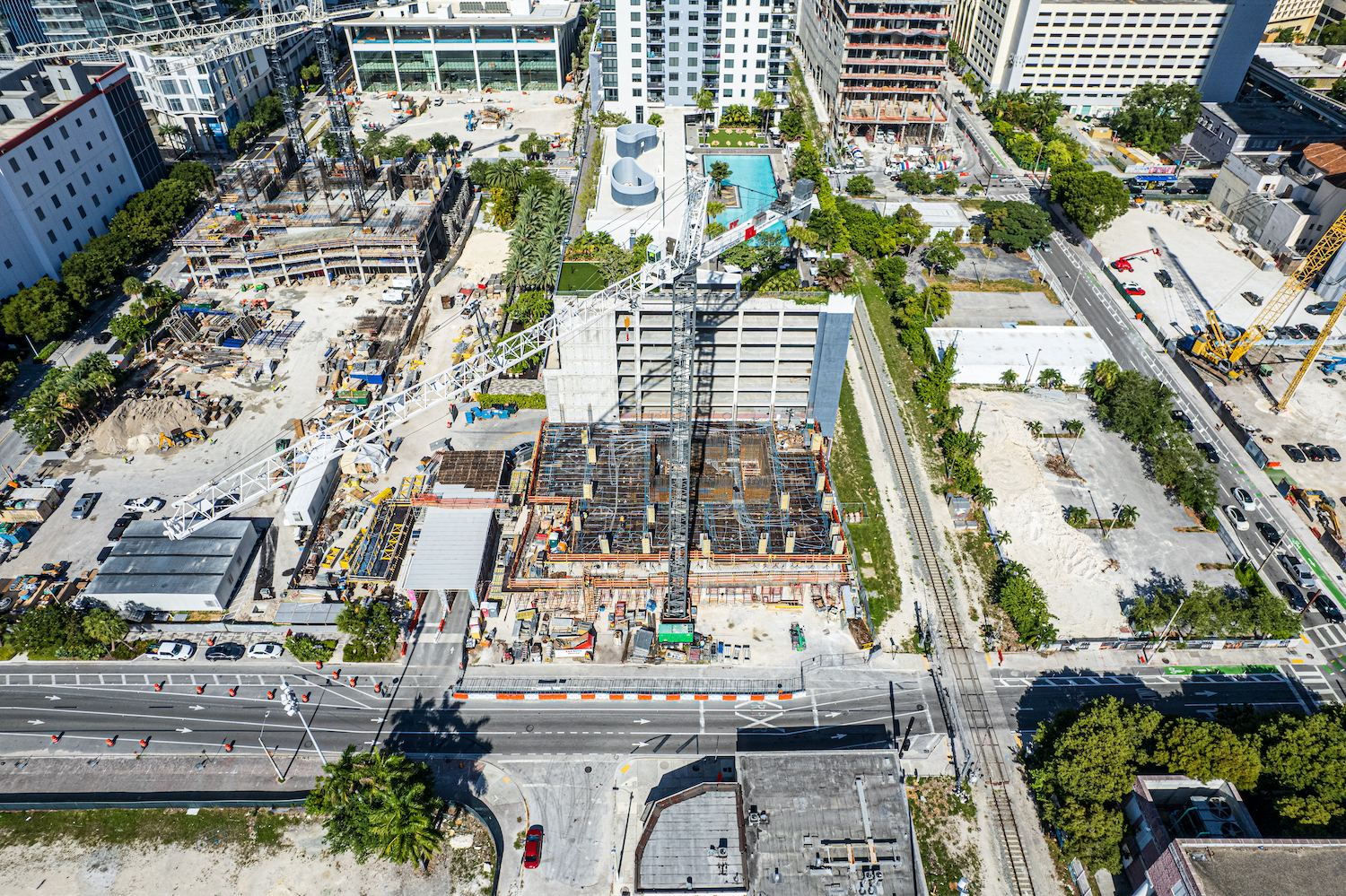 The massive vacant plot of land on the right side of the image below is where Witkoff Group is planning to build three 57-story towers with residential, office and retail uses. These towers would top off between 673-feet and 700-feet, according to recent FAA filings. 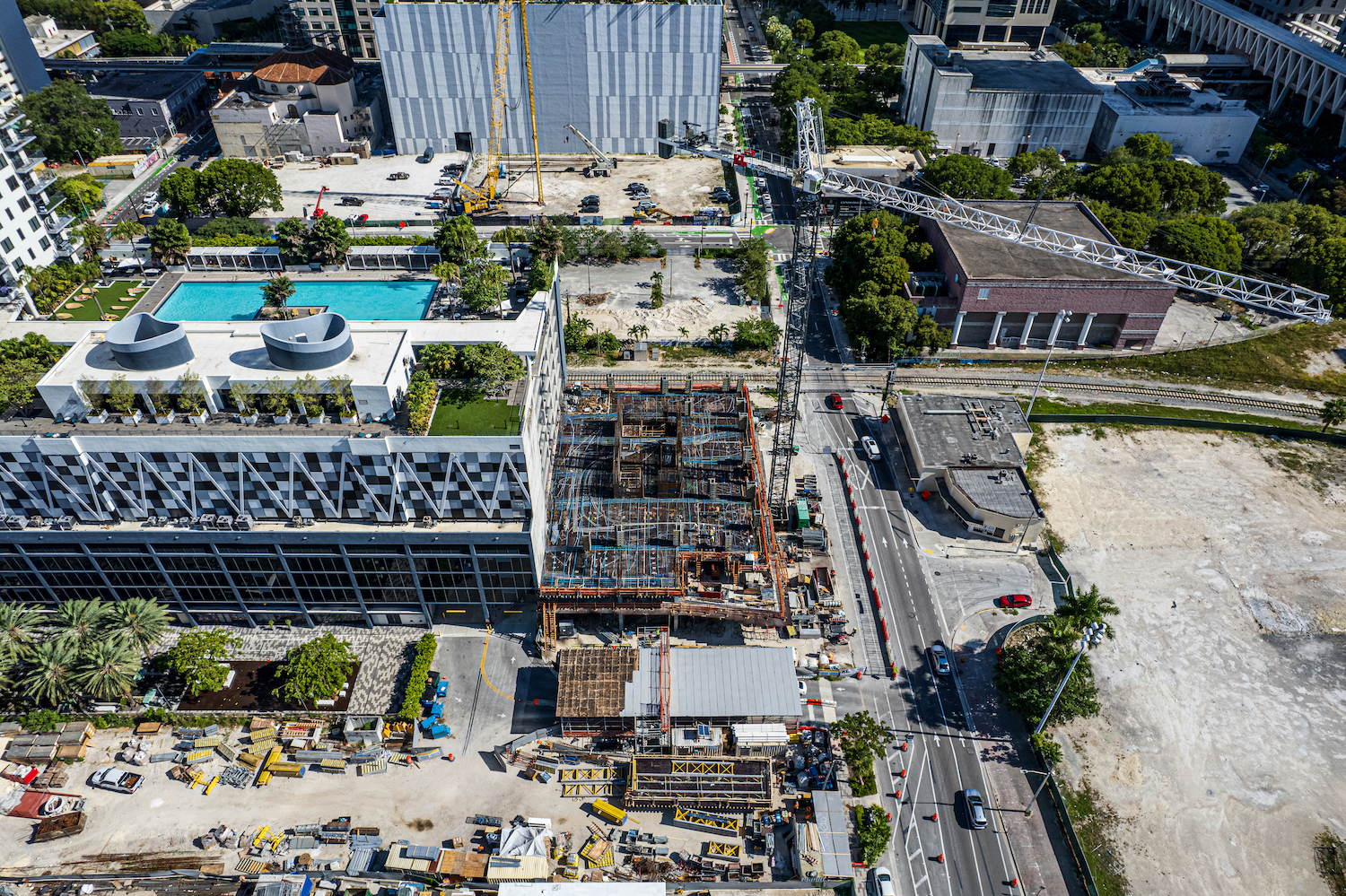