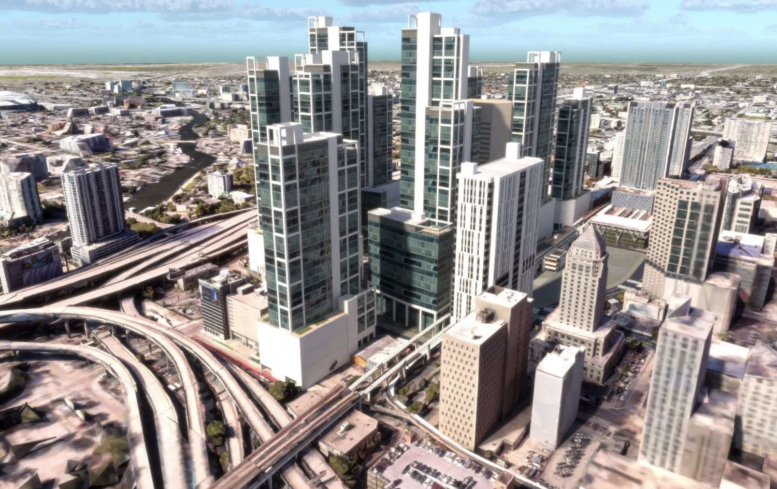 Miami-Dade County has initiated a Request For Proposals (RFP) to enter into a long-term public-private partnership to redevelop 17 contiguous acres of County-owed land within the 28-acre Government Center District in Downtown Miami. The bidding process opened this past Tuesday for the redevelopment project, which the county branded as MetroCenter, and the property comprises 11 primary sites spanning multiple blocks west of the Government Center Metrorail Station and east of the I-95 Expressway. The chosen Master Developer will have the opportunity to lead the development of up to 23.7 million square feet of mixed-use space which could include anywhere between 6,000 to 8,500 residential units mixed between affordable and market rates, educational facilities, transportation advancements, cultural amenities and open spaces, commercial spaces, hospitality spaces, and retail establishments. These uses would be spread throughout multiple structures that could rise 550 to 770 feet, with the objective of creating a seamless, active, self-sustaining, urban neighborhood.

The county-owned sites are generally broken down into 7 development blocks, two of which are further divided into 3 development pads, seen in the image below. Many of the properties that are up for redevelopment are currently improved and occupied with public uses that will require relocation and/or reconstruction else where in order to raze the lots for development. Nine of these sites hold potential for vertical development, and the remaining two would be utilized for a central park of some sort. The first site is listed as 111 Northwest 1st Street, a 5.8-acre property sitting between Northwest 2nd Avenue and Metrorail tracks, and has the potential for just over 9 million square feet with a max potential height of 750 feet. Site 1b and 1c would the ideal location for the proposed central park. 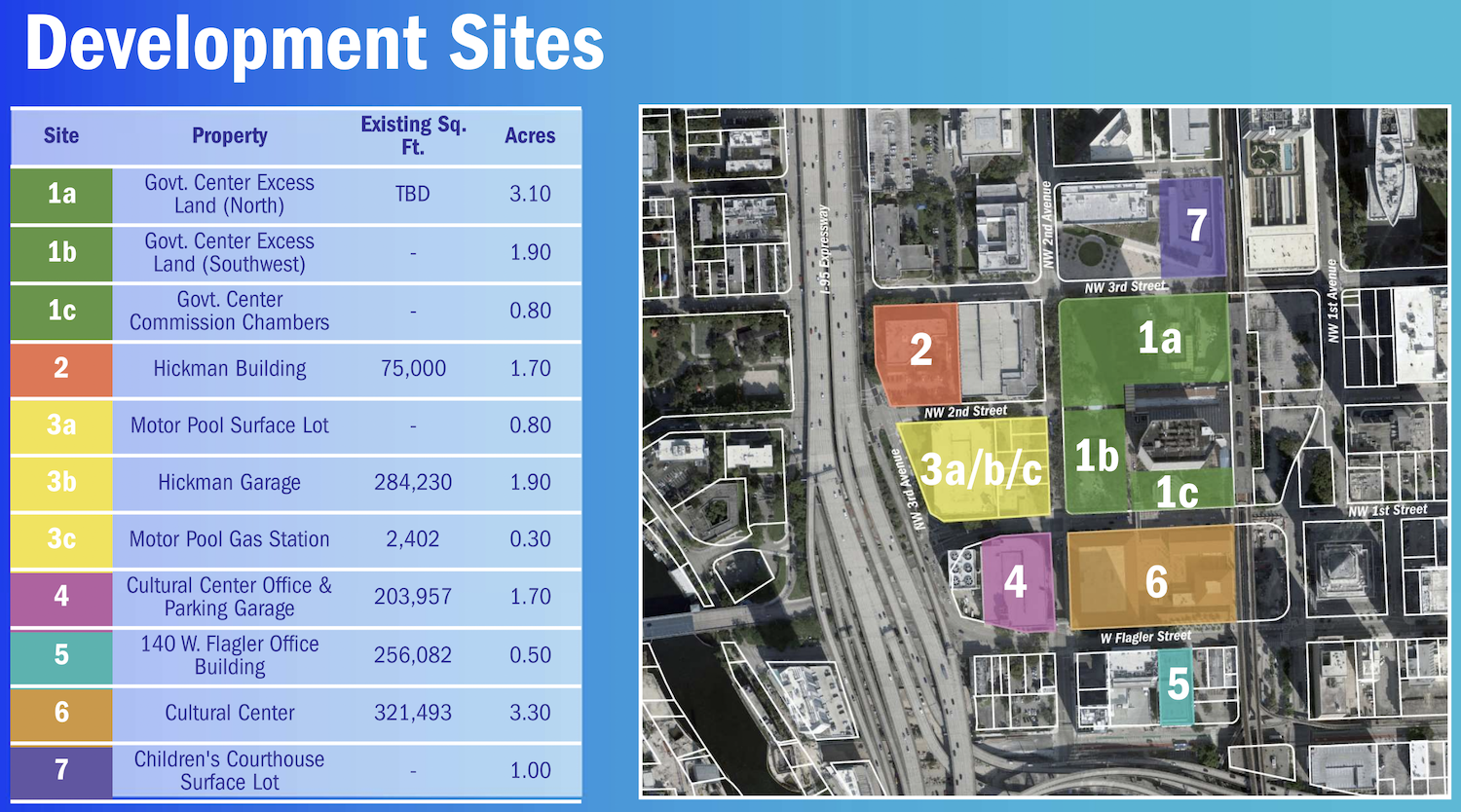 Site 2 is 275 Northwest 2nd street, the current location of the Hickman Building built in 1979, bound by Northwest 3rd Avenue on the west and Northwest 3rd Street on the north. This 1.70-acre site has potential for around to 2.22 million square feet of space and a maximum height of 550 feet. Site 3 sits immediately south of Site 2 and is subdivided into three sections, including the addresses 120 & 150 Northwest 2nd Avenues and 270 Northwest 2nd Street. The potential here is for over 3.5 million square feet with a ceiling height of 600 feet. Current improvements include a Motor Pool surface parking lot, the Hickman Building Garage and a Motor Pool Gas Station. Site 4 at 50 Northwest 2nd Avenue spans 1.7 acres with approximately 2.22 million square feet of buildable square footage and a ceiling height of 650 feet. Existing improvements include the Cultural Plaza Office and Parking Garage. 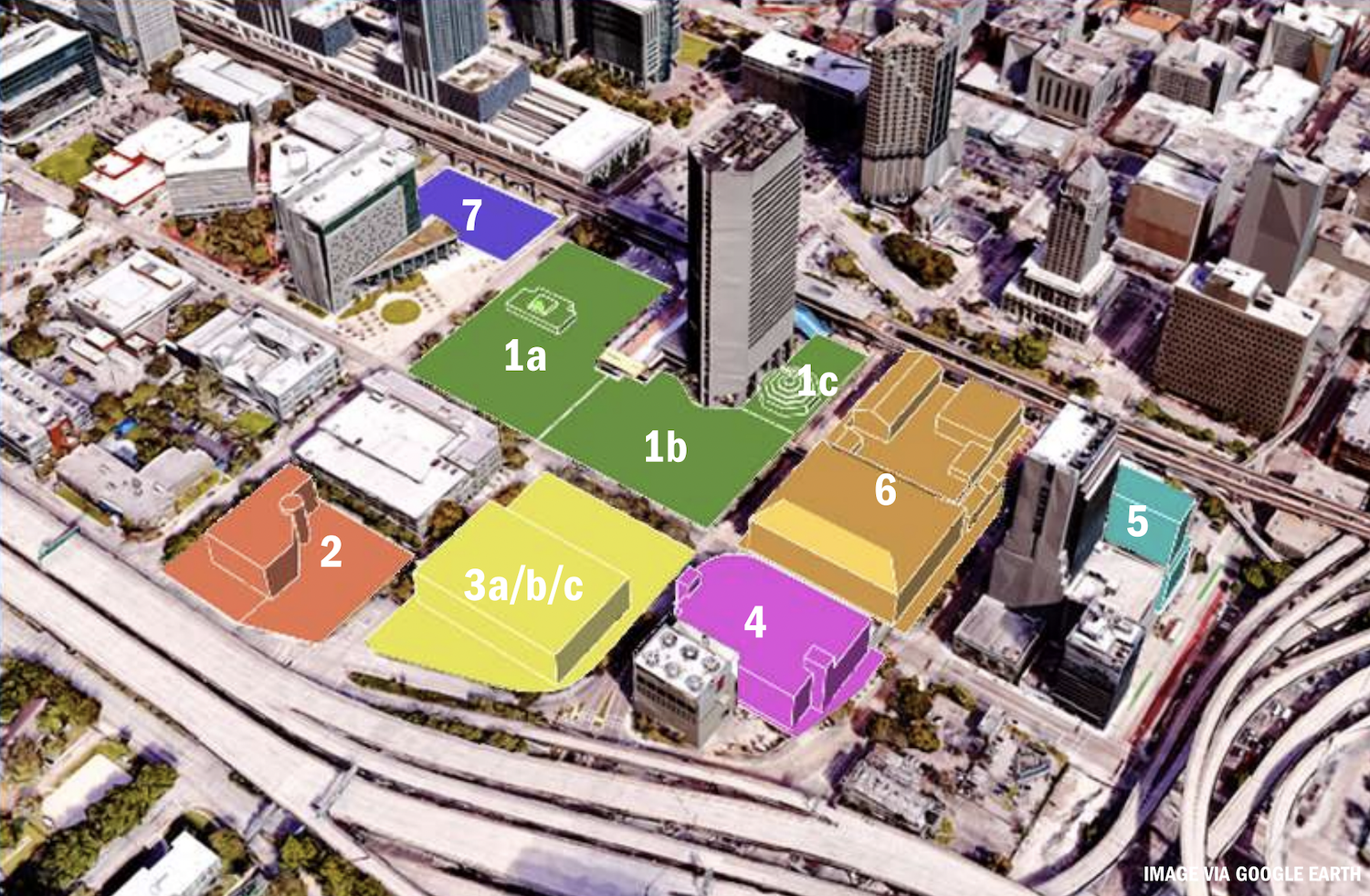 140 West Flagler Street is Site 5, located at the southeast limit of the development area and bound by Southwest 1st Street on the south. A vacant 15-story commercial tower that stood for 47 years there is now being demolished. This is the smallest of all the lots with only 653,000 square feet of buildable area, but the ceiling height for a structure is 700 feet. Site 6 is across the street at 20 Northwest 1st Avenue, where the Public Library and Miami History Museum is located, and up to around 4.31 million square feet of space can be built with a maximum height of 750 feet. The last site is on the north side of the development at 155 Northwest 3rd Street, the Children’s Courthouse Parking lot which allows 1,307,000 square feet of development and also 750 feet height. 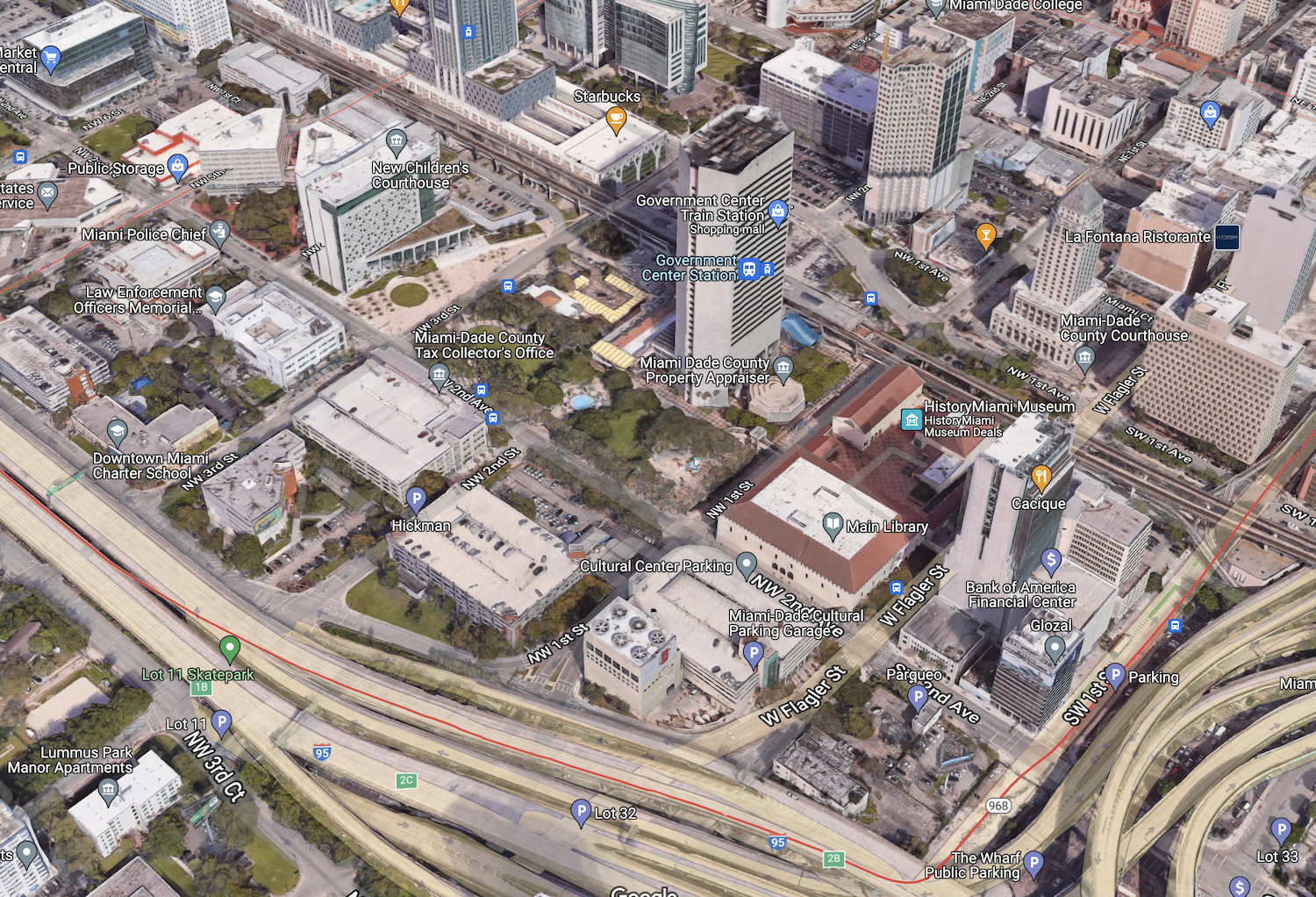 A massing concept has been unveiled as an illustrative placeholder to depict what the overall project would look like in the Miami skyline, which is compared to massive mixed-use complexes such as Hudson Yards in New York City and the Salesforce Transit Terminal in San Francisco. Below are several renderings of the conceptual complex see from multiple perspectives. 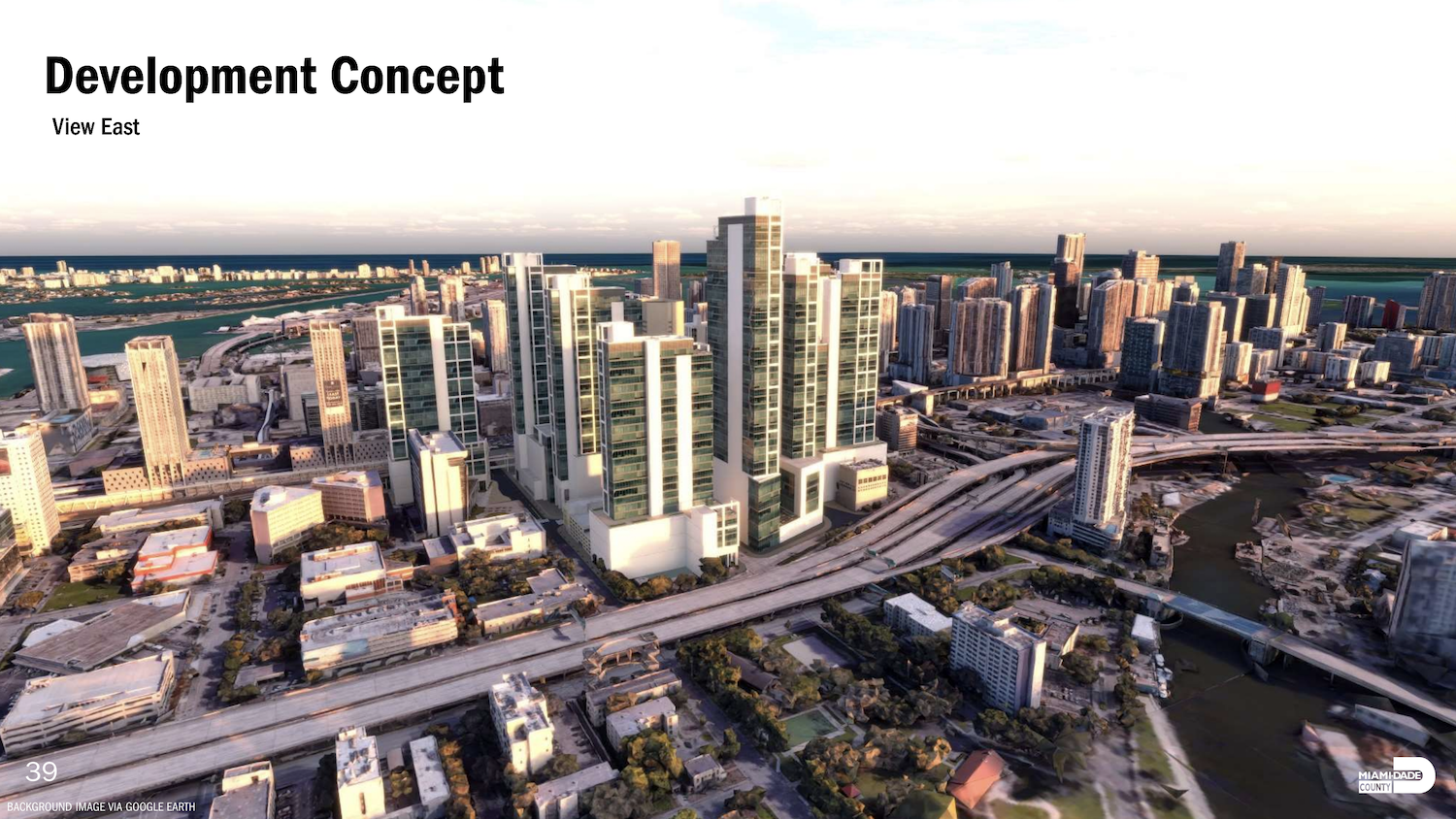 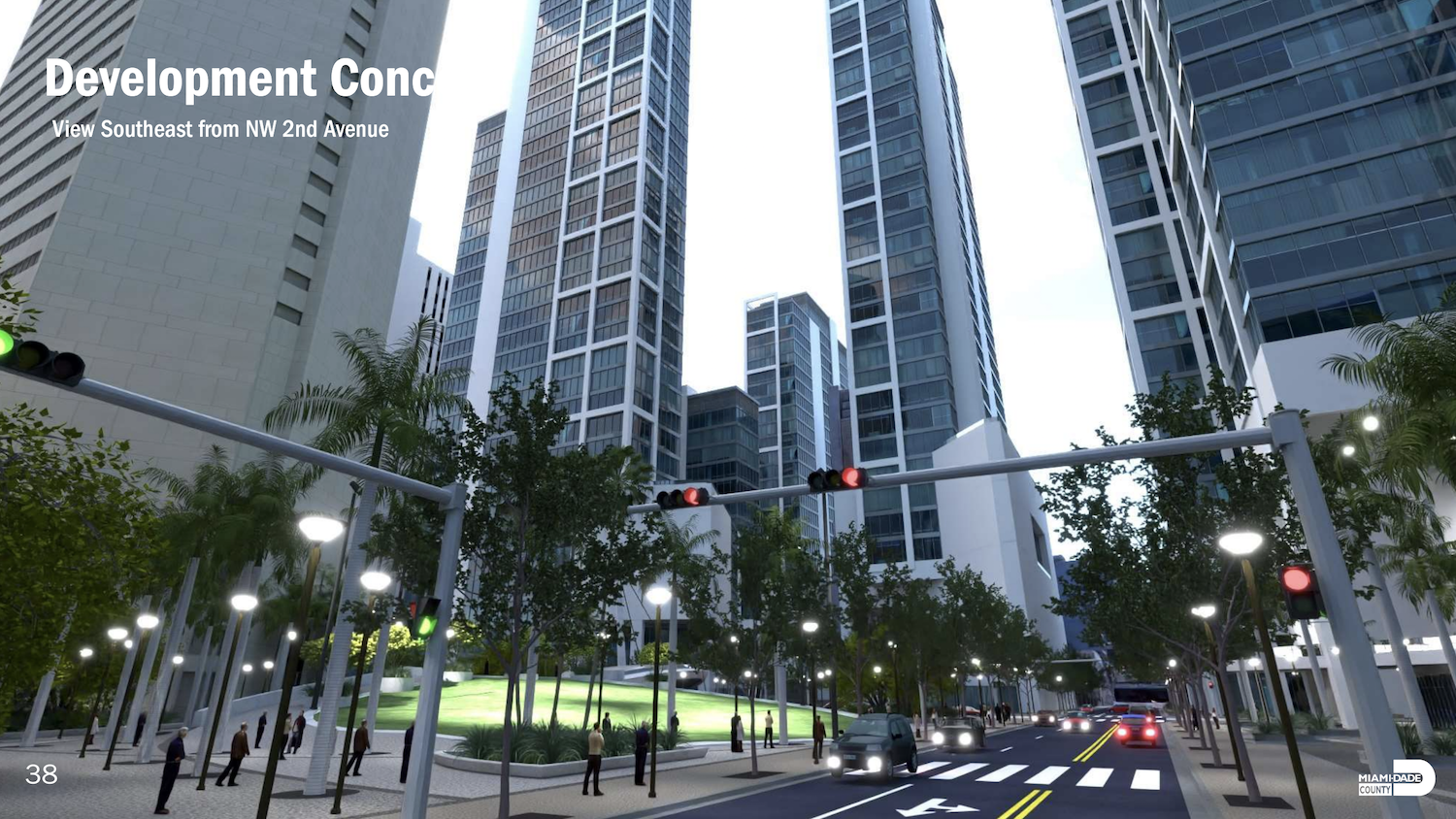 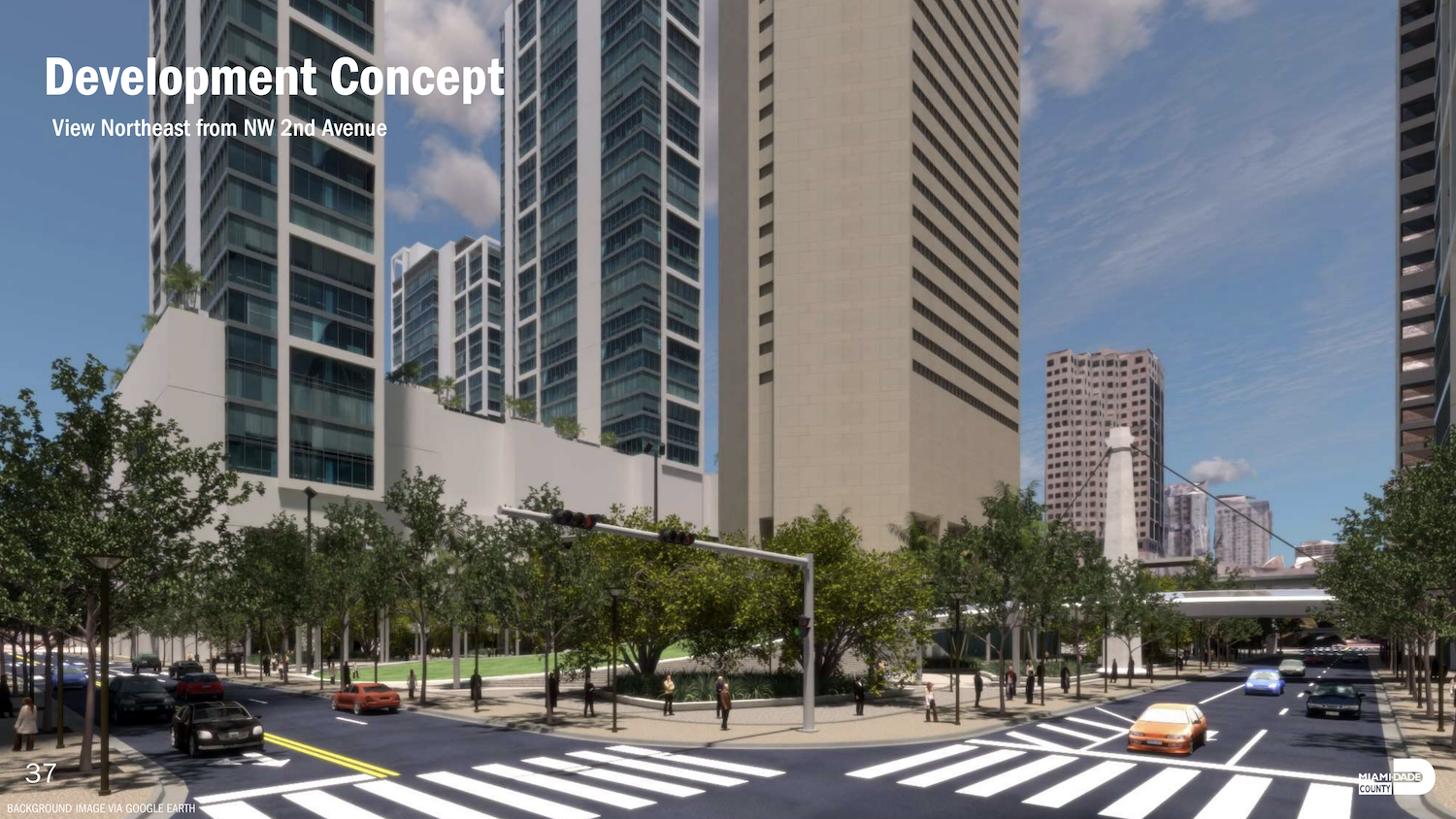 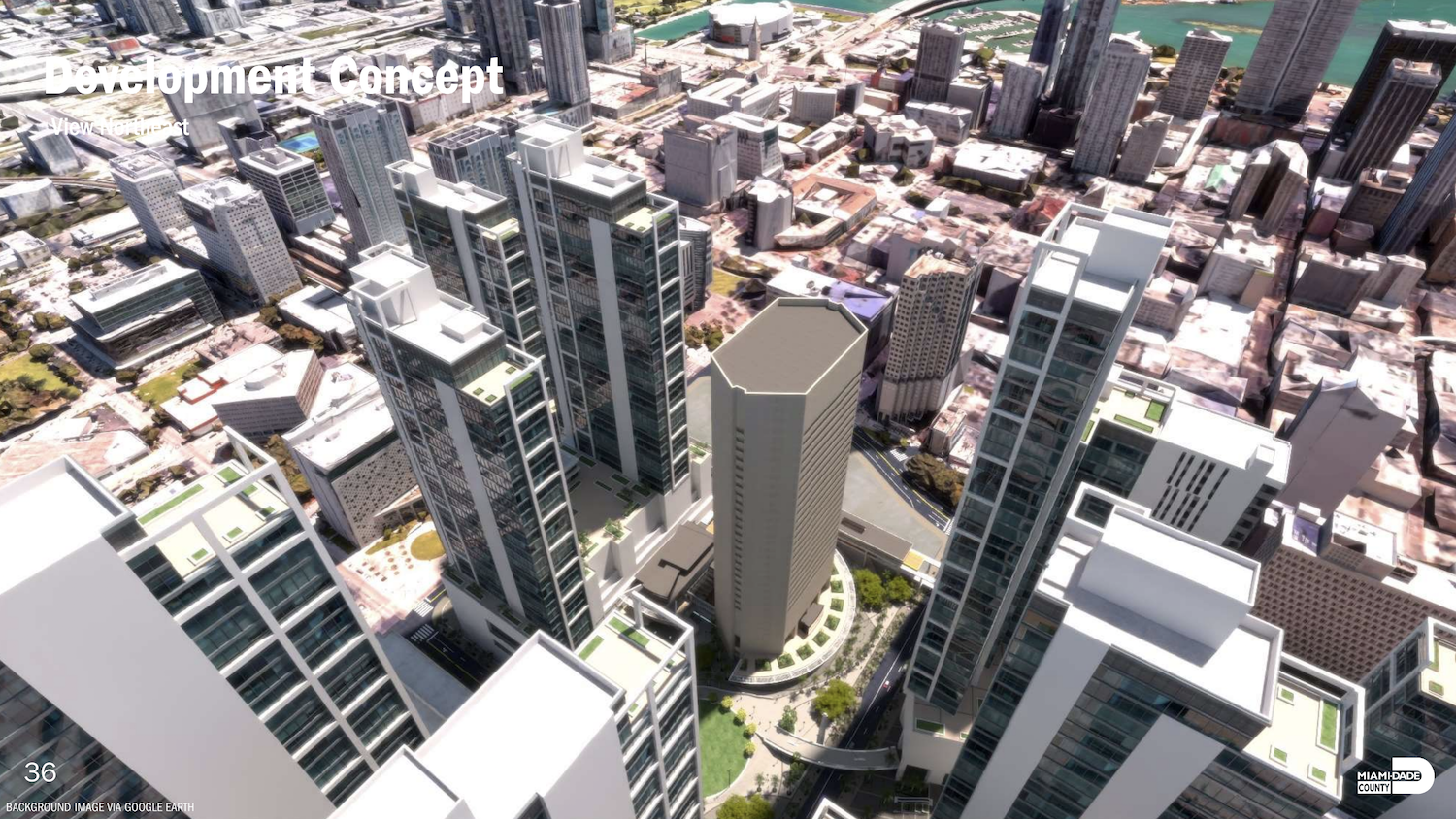 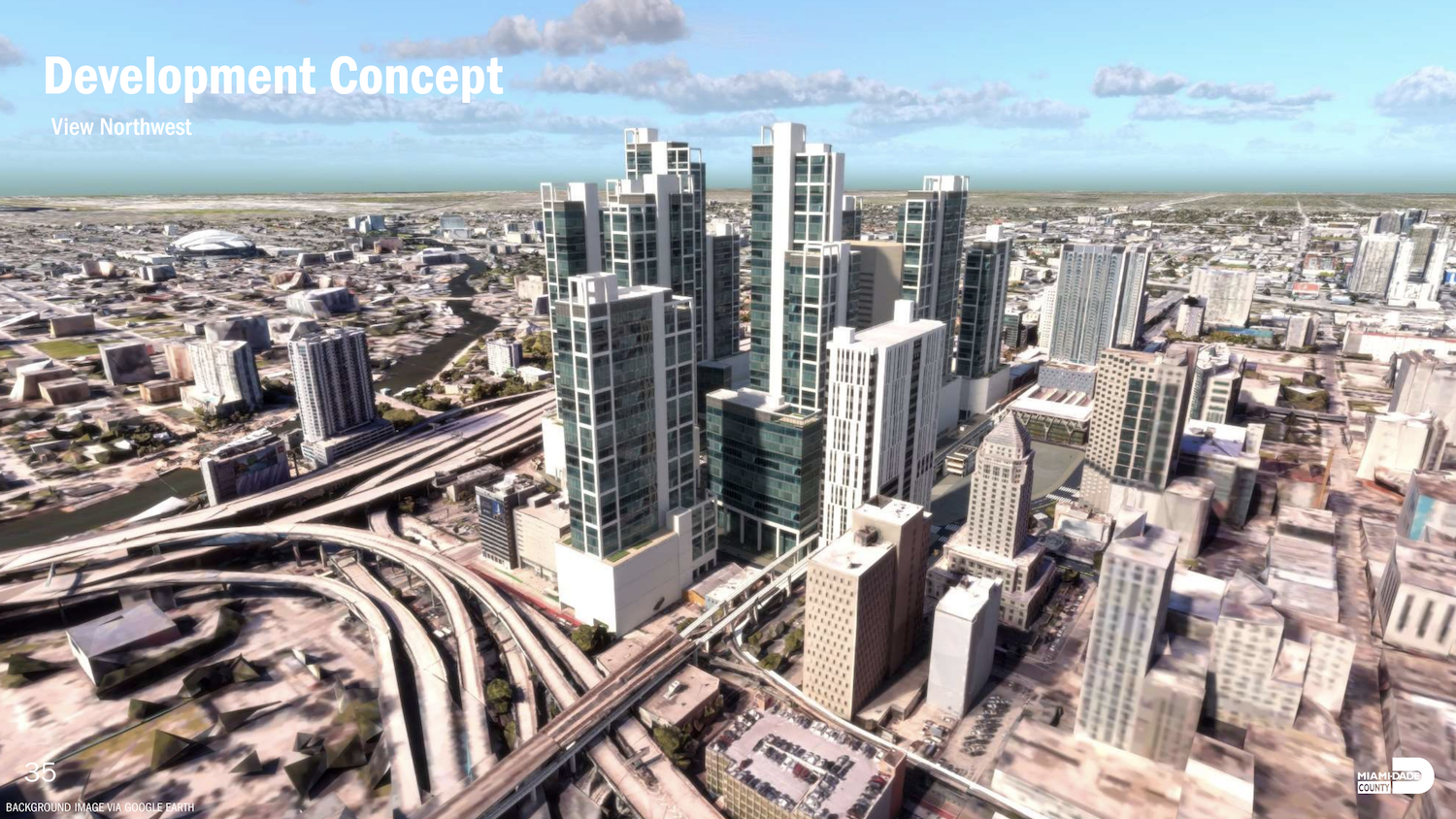 The minimum requirements for the development program ask for 2000 affordable/workforce housing units, 2.5 acres of connected public open spaces with amenities, a new transit terminal with direct link to Metrorail and new public facilities for the cultural arts campus, main library, HistoryMiami Museum and other uses. Required educational uses include spaces for a  daycare, pre-k, elementary school, middle school and high school. Other improvements for County use include fleet parking, fueling and maintenance for governmental purposes, a Juvenile Assessment Center, including office and services space, preferably incorporated into new, private commercial development on the Children’s Courthouse Site Excess Land, office space of approximately 60,000 square feet for use by PROS for headquarters and interactive lobby, Recreation, Wellness and Conservation center of approximately 45,000 square feet, preferred to be within a 5-minute walk of the other PROS headquarters and shared / synergy with proximate cultural and education space, a new County Commission Chambers to include: 36,000± square feet for commissioner office and conference room space for use by the Board of County Commissioners and their supporting uses currently housed at the Stephen P. Clark Government Center (SPCC), and 7,350± square feet for commission chambers/flexible auditorium space, and to build and reserve up to 2,000 spaces for public parking to be operated by the County in perpetuity, at its adopted parking rates and policies.

The Master Developer with the winning bid/proposal for MetroCenter shall create a successful development program and adapt the site for maximum market acceptance and financial feasibility, that blends the highest and best economic and social use. The proposal must demonstrate architectural excellence, innovation, world-class design and proper urban planning that maximizes orientation and connectivity with a focus including walkability, connectivity, the pedestrian experience, and bicycle safety.

The master developer will be selected in 2024, and completion of the entire development could take anywhere between 10 and 15 years.

3 Comments on "Miami-Dade County Releases New Details On MetroCenter, The Redevelopment Of 17-Acres In The Government Center District"