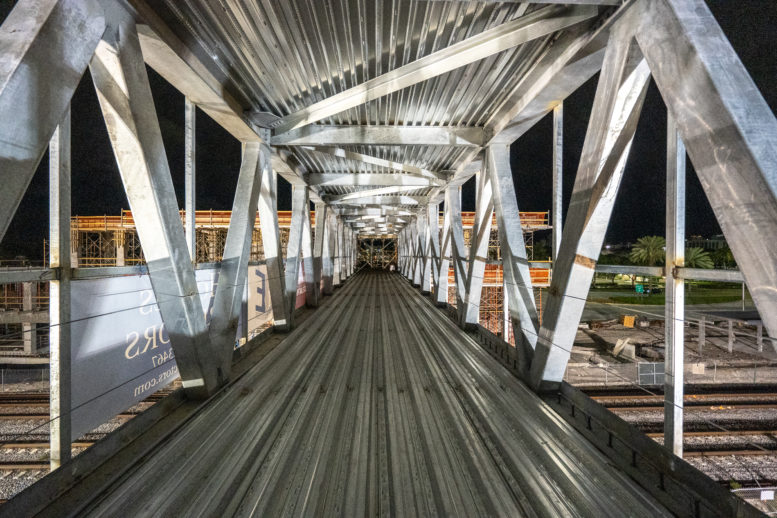 Intercity rail provider Brightline and its contractor Lemartec have topped off the Aventura Station. This topping-off marks the completion of vertical construction. The topping-off occurred in the early morning of October 8 and consisted of putting a 131-foot long, 68-ton pedestrian sky bridge on two 41-foot-high vertical transportation towers over 90 minutes. Stretching across Harriet Tubman Highway (formally known as West Dixie Highway), the sky bridge is the final piece of the Aventura station’s structure and connects the station to the platform. 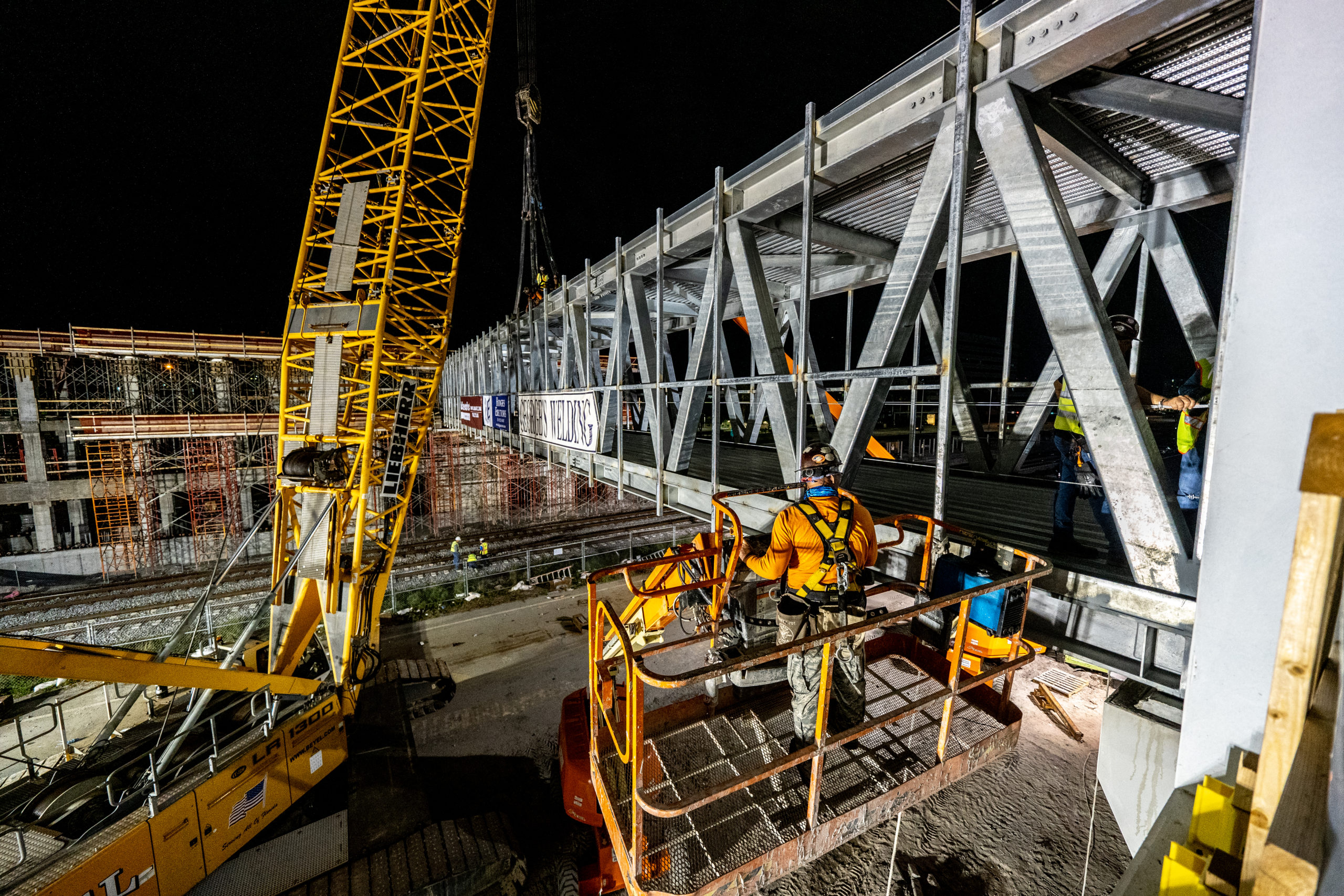 “This topping off is a testament to our team’s dedication to bringing the vision of connectivity to the Northeast Corridor,” said Patrick Goddard, president at Brightline. “Our partners at Miami-Dade County were an integral part of making this station a reality and bringing enhanced access to area residents.”

Once completed, the 3.5-acre project consisting of the station and its surface parking lot will be Brightline’s fourth in the state, connecting travelers in Miami, Fort Lauderdale, Boca Raton, and West Palm Beach, followed by Orlando in 2023. The site also features 240 parking spaces, a bus drop-off for Miami-Dade Transit passengers, and newly landscaped and hardscape areas. 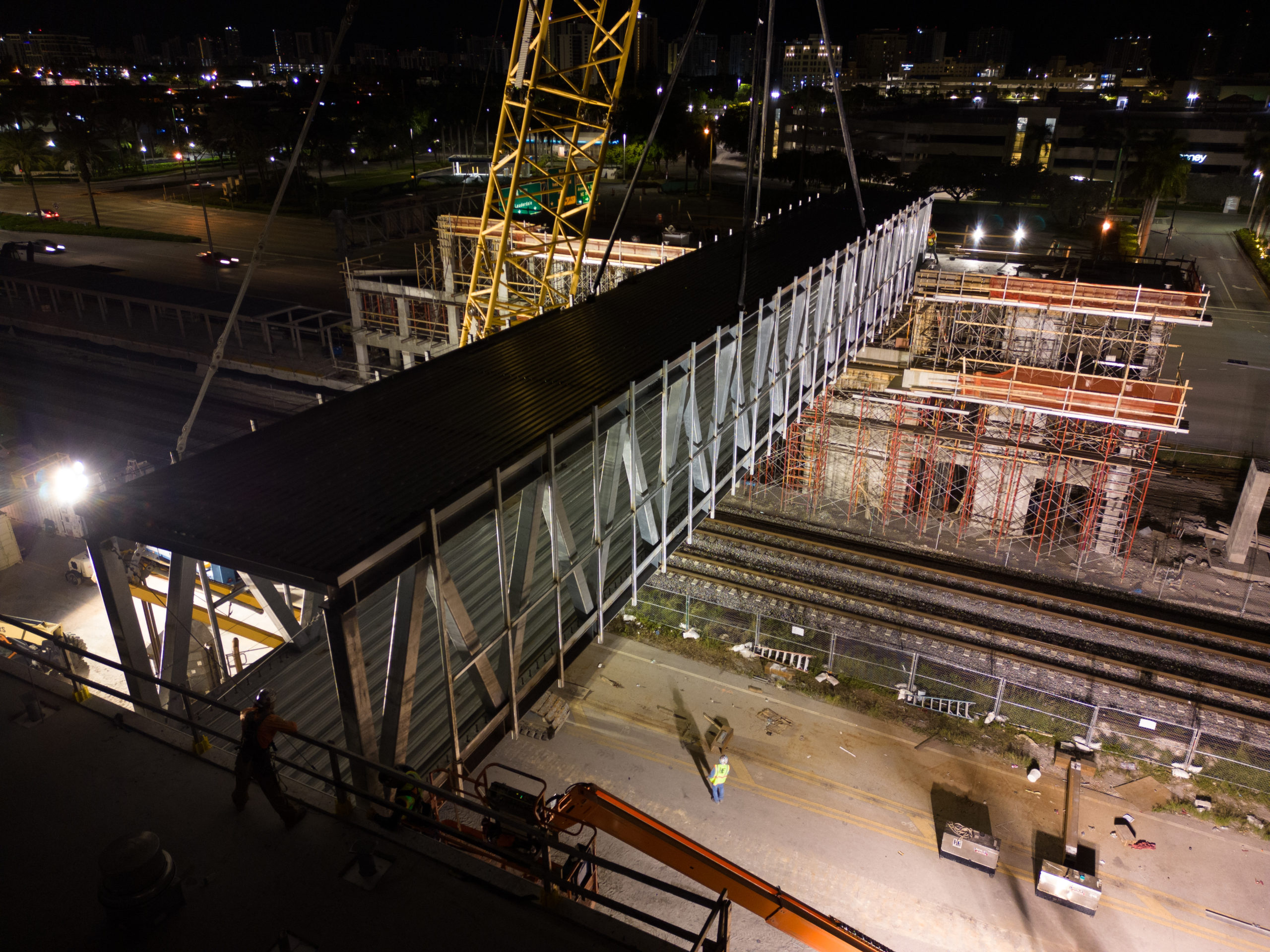 Across from Aventura Mall, Brightline’s Aventura station, platform, and vertical towers feature 34,000 square feet of space and an 860-foot center-loaded platform within the Florida East Coast Railway and Brightline right-of-way. The station will include its signature autonomous MRKT, SMART, PREMIUM lounges, and Brightline+ services. After passing through security, Brightline passengers can access the sky bridge from the passenger lounge via an elevator or escalators to the vertical transportation towers after passing through security.

“A tremendous amount of effort and energy went into what culminated in the lifting and setting of Aventura station’s pedestrian sky bridge,” said Manny Garcia-Tunon, president at Lemartec. “With the help of Miami-Dade County and Florida East Coast Railway, Brightline and Lemartec were able to safely facilitate the coordination of this top, ensuring roads and railroads were clear.” 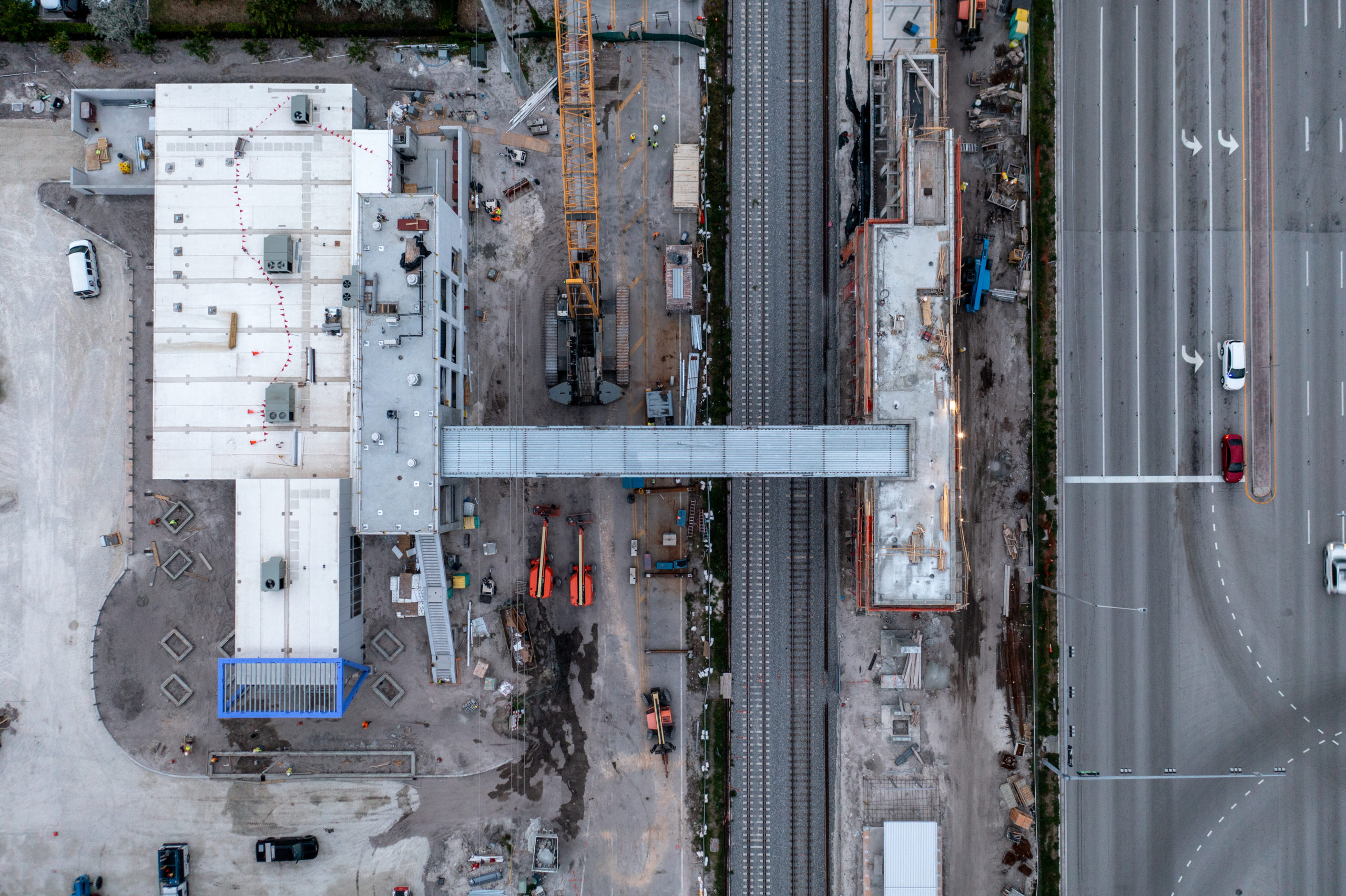 “The topping off of the Aventura station brings us one step closer to increasing mobility for northeast Miami Dade County,” said Mayor Daniella Levin Cava, Miami Dade County. “This station is an important component of my plan to enhance transportation options throughout the county, making it easier for our residents to go to work, school, or leisure activities.”

“It is great to see the Aventura Brightline station closer to completion. This commuter stop in Aventura will help alleviate road congestion and connect a key community to four major downtown communities in South Florida and Orlando in 2023. The impact of this connectivity is vital for northeast Miami-Dade County and its residents,” said Commissioner Sally A. Heyman, Miami-Dade County, District 4. 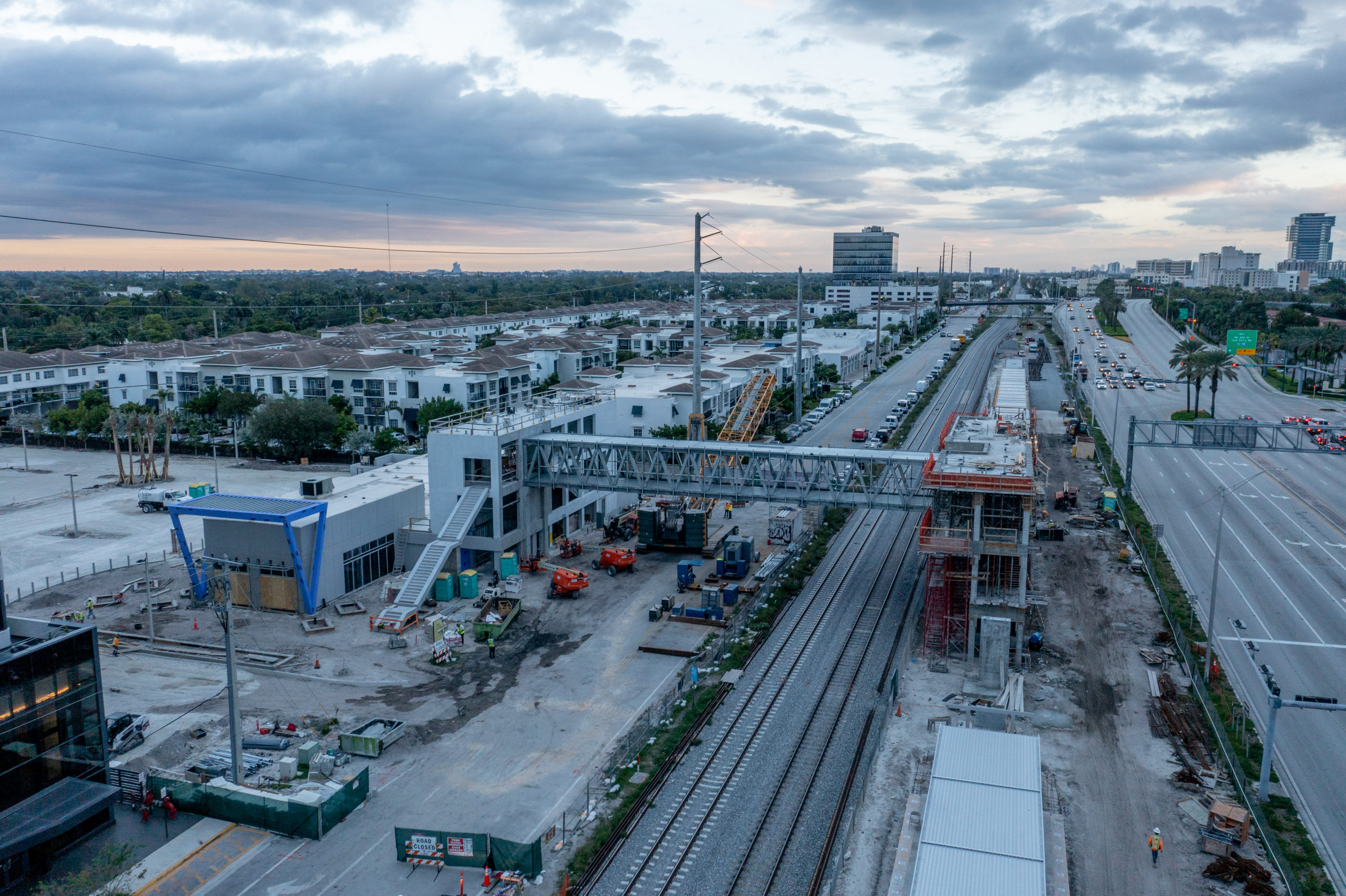 Miami-Dade County will offer subsidized fares for a percentage of riders between Aventura and MiamiCentral. Brightline will provide frequent express service from the Aventura station to downtown Miami during the peak morning commute and return service during the evening rush hour. The trip time between downtown Miami and Aventura is about 15 minutes.

In October 2019, the Citizens’ Independent Transportation Trust (CITT) passed a resolution to approve the property acquisition and development agreement between the County and Brightline. It also approved the use of $76.7 million of surtax dollars for developing this project, which will serve the Northeast Corridor – one of six corridors in the Strategic Miami Area Rapid Transit (SMART) Plan. The $76 million investment made by Miami-Dade County has created more than 400 jobs during construction. It will continue to generate significant economic benefits, including $90.8 million annually in economic impact and $2.7 billion over 30 years. 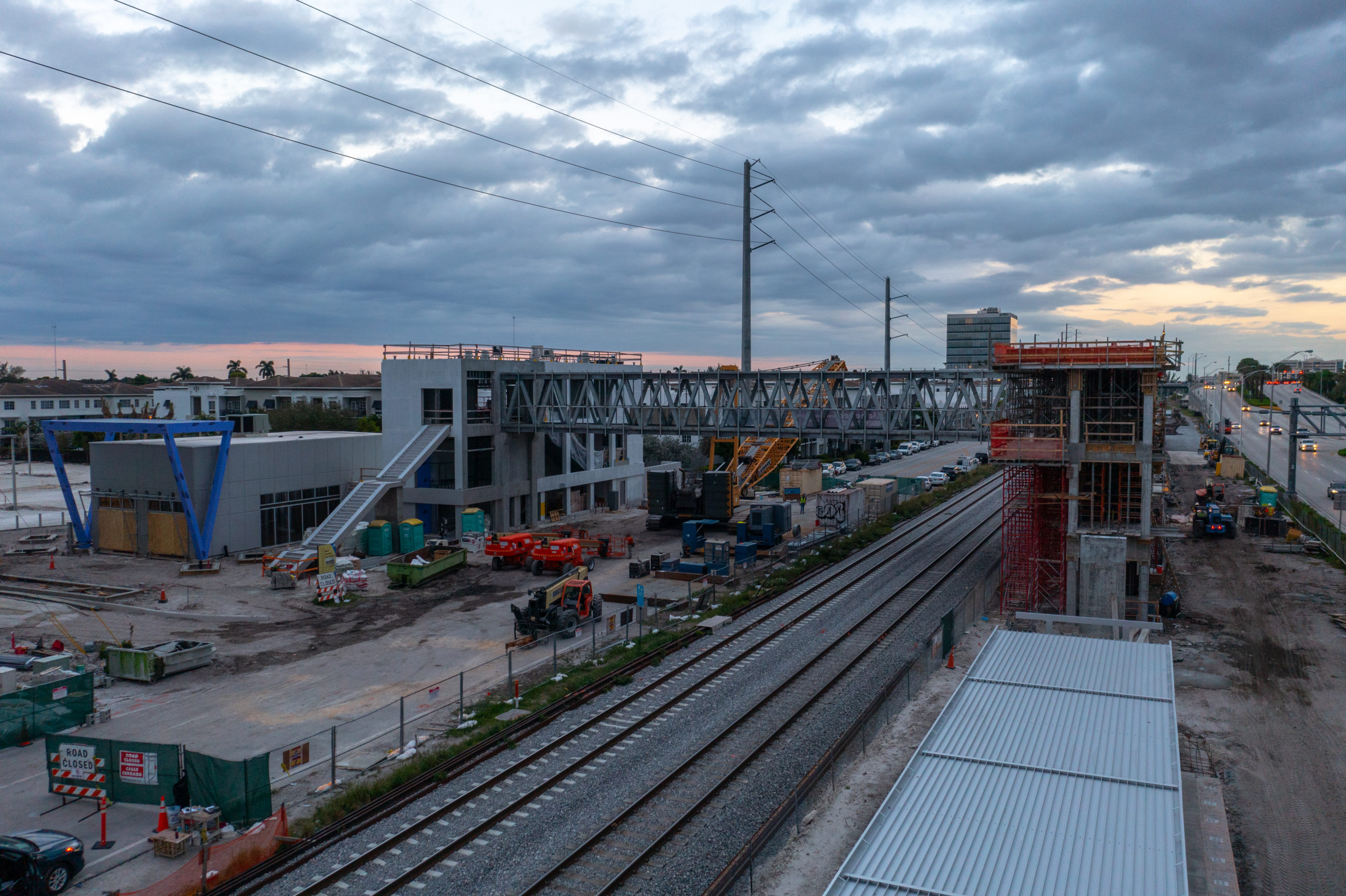 Brightline is expected to launch service to Aventura before the end of the year. The station is at 19796 West Dixie Highway, Miami, FL 33180.