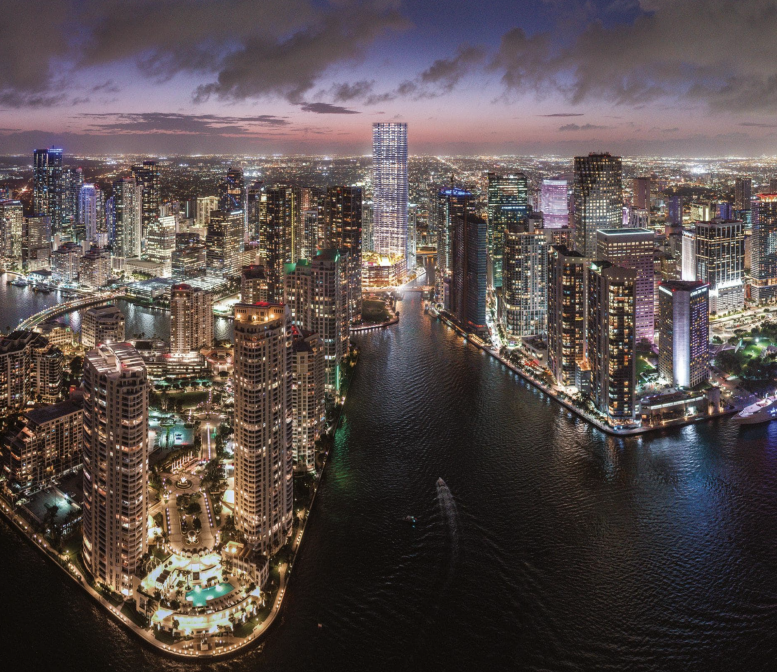 Developers Related Group and SH Hotels and Resorts have confirmed their plans to move forward with the construction of Baccarat Residences Brickell, a 75-story glass-clad luxury residential tower set to rise along the Miami River in the coveted Brickell neighborhood. The property is addressed as 77 Southeast 5th Street, beside Related’s 444 Brickell Avenue, located just west of the Brickell Avenue Bridge and east of the Brickell On The River condo towers bounded by SE 5th St. to the south. The tower will be designed by renown architectural firm Arquitectonica, paired with interiors by Meyers Davis Studio and landscaping by Enea Garden Design.

The development will yield 360 luxury residential units, some of which include 324 condo homes, 8 expansive penthouses and 28 delightful villas and duplexes facing the Miami River, ranging from as small as 1,330 square feet and maximizing over 7000 square feet. Thanks to the positioning of the tower along the riverfront, the residences will boast breathtaking views of Miami’s skyline, Biscayne Bay and Miami Beach. As expected, the property will be managed by SH Resorts and Hotels, who’s collaborated with luxury brand Baccarat in the path with the Baccarat Hotel & Residences New York. Other notable building features to be offered to residents include an exuberantly landscaped waterfront promenade and private marina, an anticipated 10,000-square-foot signature waterfront restaurant, and curated museum-quality art collections in common areas. 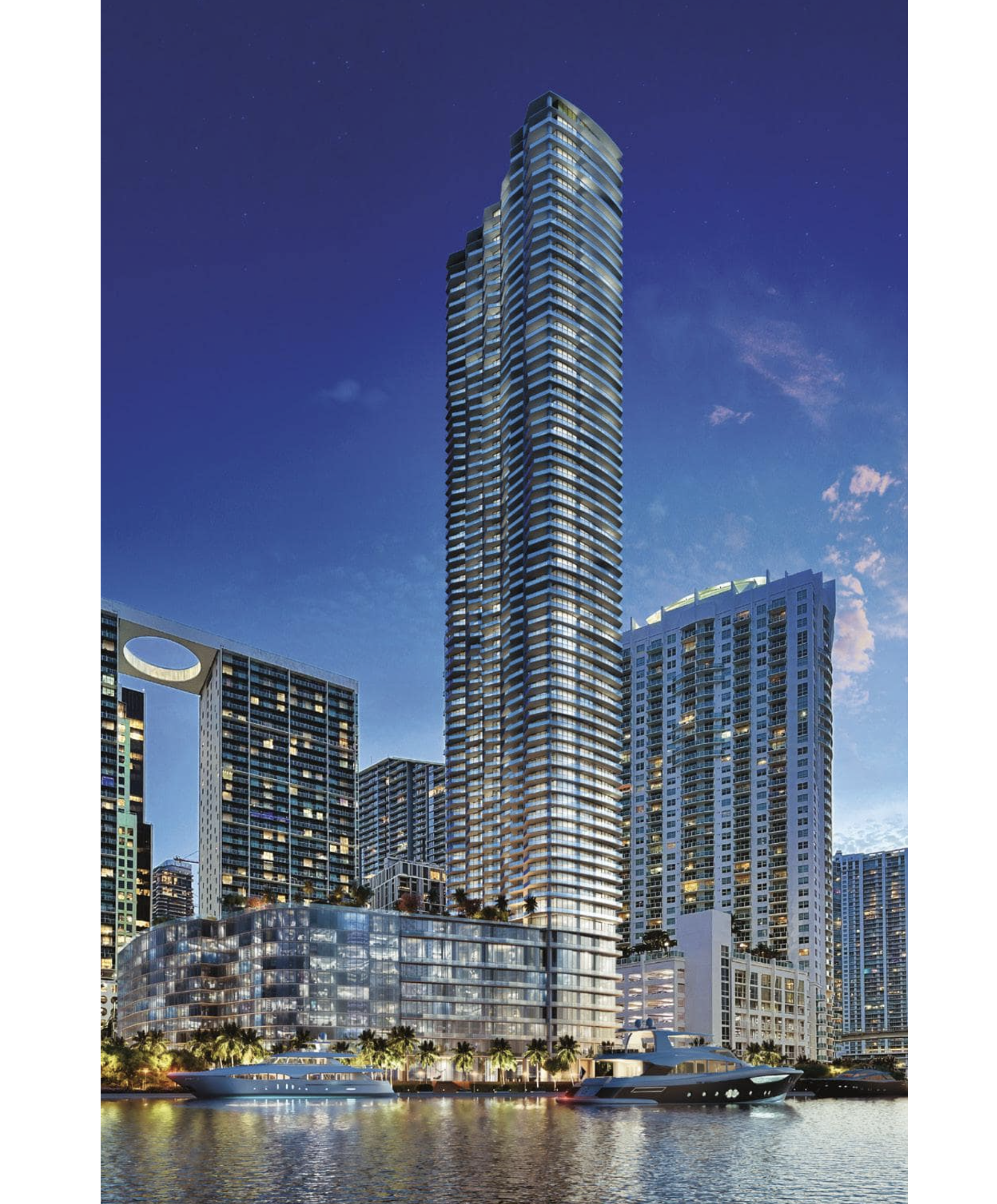 The residential units will be built following an open-concept, flow-through contemporary floor plan, configured in 1-bedroom, 2-bedroom, 3-bedroom and 4-bedroom layouts as well as penthouses, those of which will require private keys for direct elevator access in to the residences. Generous 10-foot ceiling heights will be found through the majority of the units, while penthouse residents can enjoy slightly higher 11-to-12-foot ceiling heights, with access to 8-foot-deep terraces and some corner units featuring wrap-around terraces. Gourmet kitchens will have custom cabinetry with top-of-the-line Subzero, Wolf and Cove appliances and a selection of finishes of stone countertops and backsplashes. 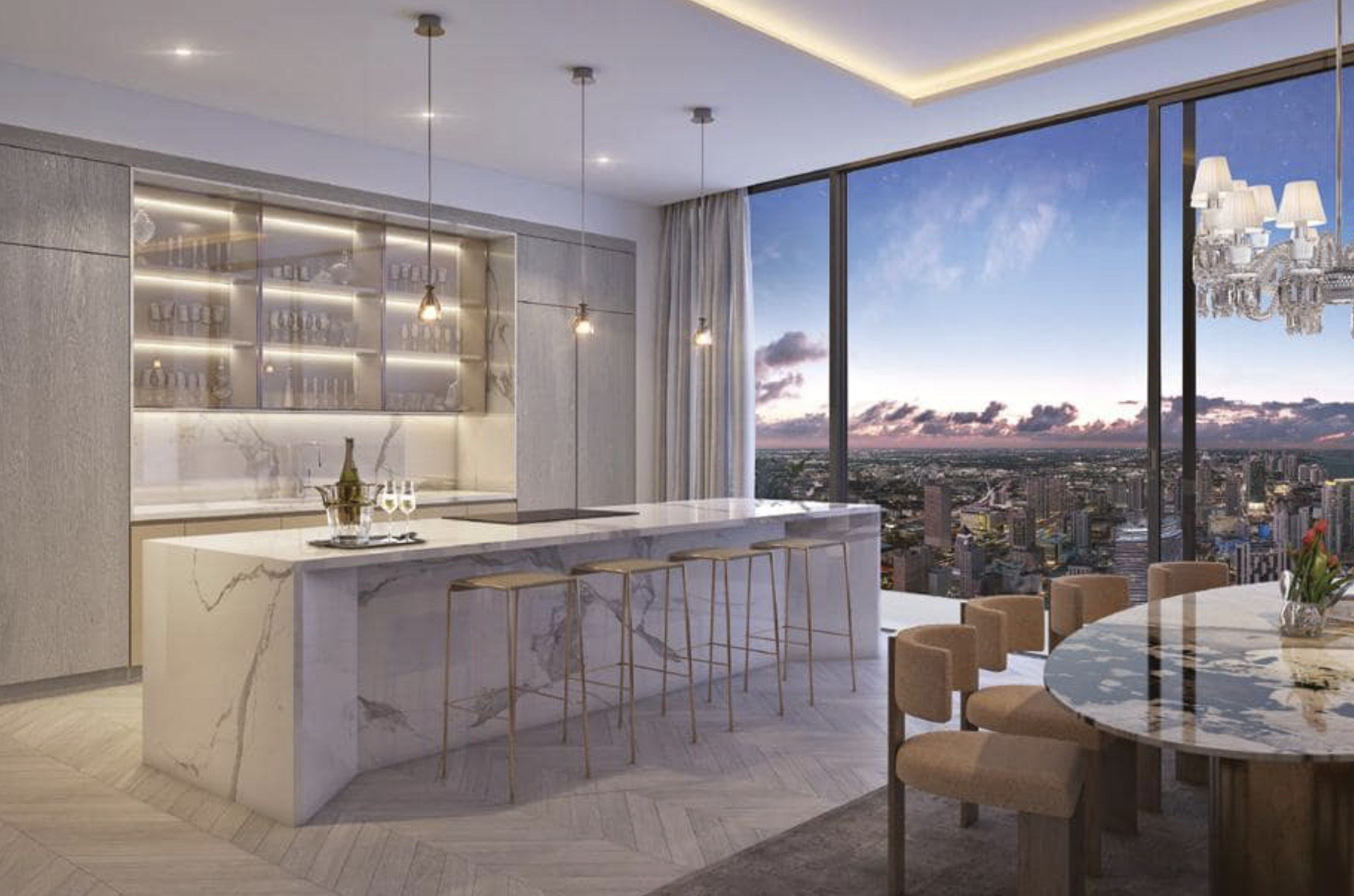 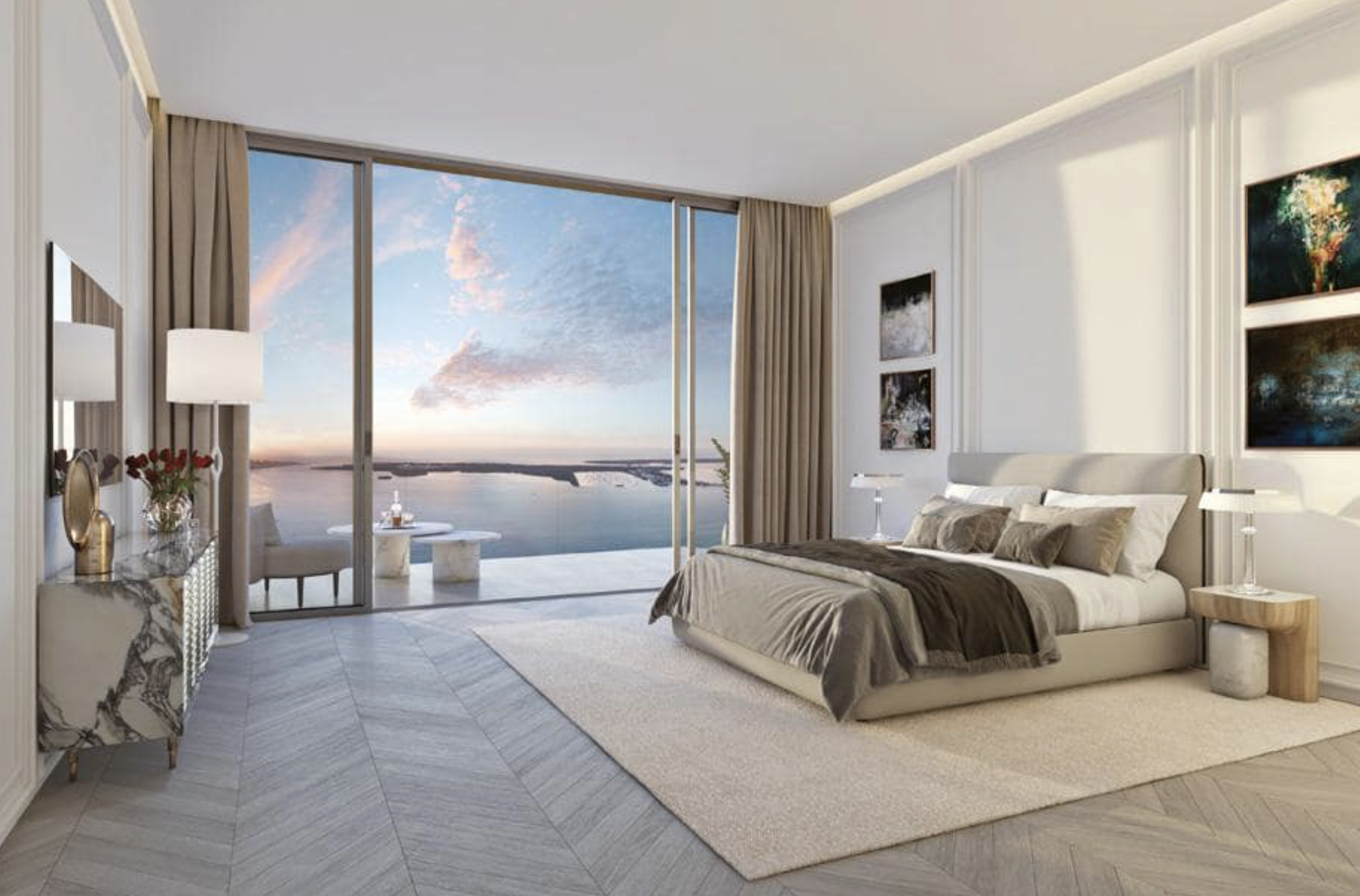 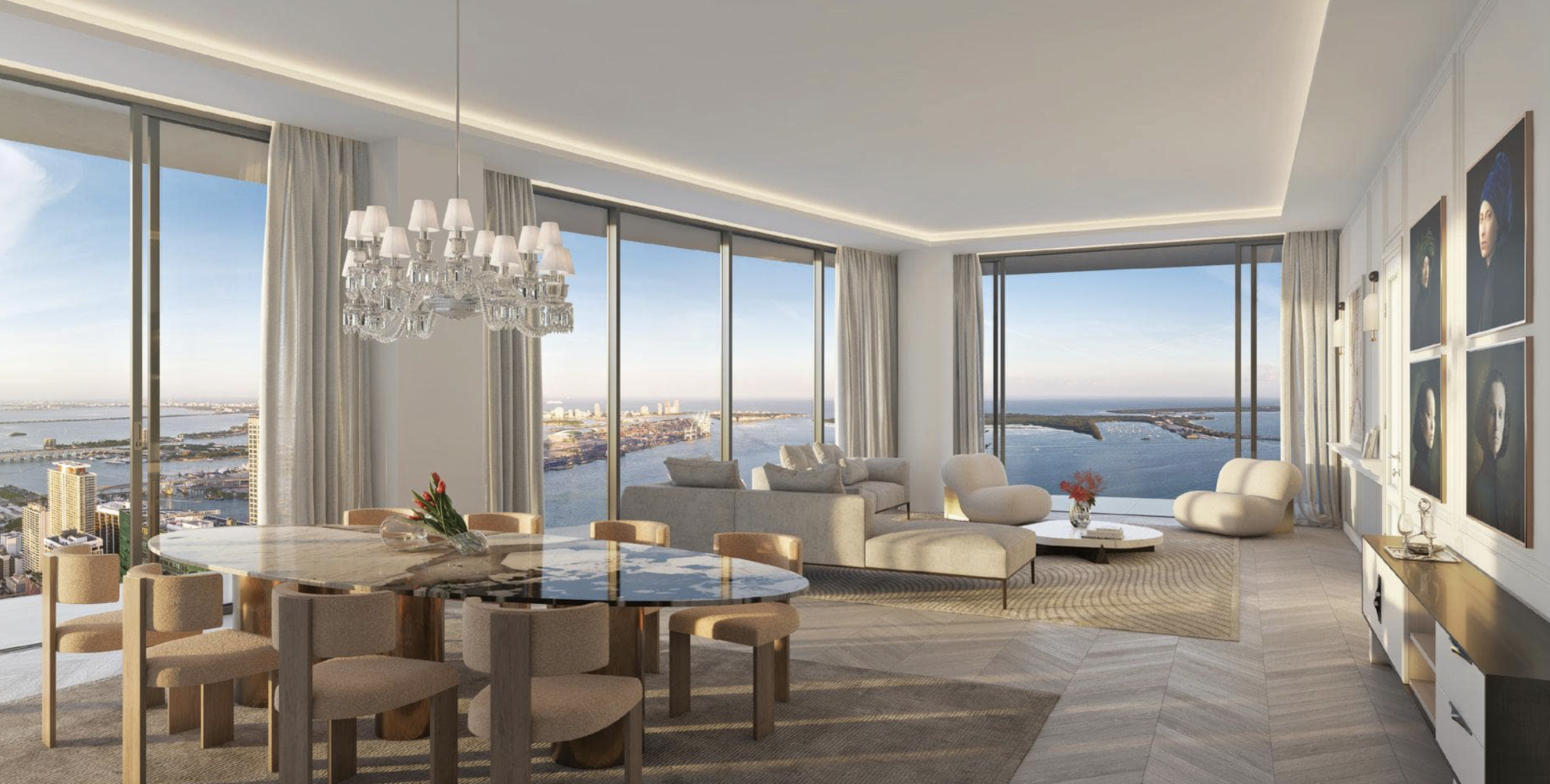 As quoted on Forbes, “As homeowners become increasingly discerning, we continue to find new ways to up the ante,” Jorge Perez, CEO and Chairman of Related, tells Forbes. “While we always strive to outdo ourselves when it comes to amenities, it is the top-tier services on offer at Baccarat Brickell that will truly set it apart. By aligning with SH Hotels & Resorts on Baccarat Residences Brickell, our residents know that their lifestyle will center around ease, with an endless roster of curated services to make life easy and enjoyable. We’ve been honing this approach for the last several condominium generations and are poised to make this our most luxurious product to date.”

Despite the recent archaeological findings on the property during the demolition of the former structure, the developers are moving forward with confidence that the project won’t face any pushback. Arquitectonica’s design for the structure is said to be inspired by crystals, where the facade will mimic it’s properties through a chiseled-like pattern and undulating form that will gracefully reflect the water of the river. The interiors by Meyers Davis Studio will fuse French tradition and creative modernity for a most-unique living experience.

Completion is scheduled for 2024, with sales of the units already underway. Groundbreaking is likely to occur later this year.

2 Comments on "Plans To Build A 75-Story Baccarat Residences Are Moving Forward In Brickell, Miami"

Exterior work is moving along on 115 East 55th Str

Looking down at the sharp crown of 400 Park Avenue