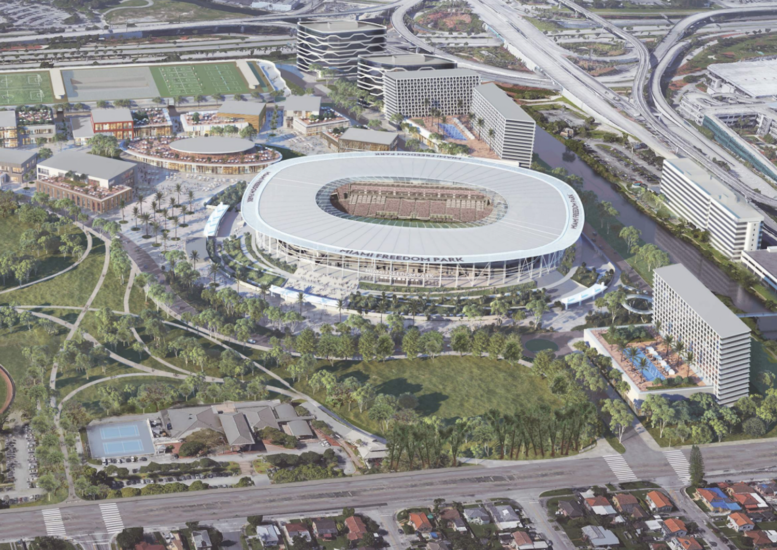 The developers behind the proposed Miami Freedom Park have submitted a revised master plan and new renderings to city planners for review. Arquitectonica is listed as the architect with ArquitectonicaGEO as the landscape architect and Miami Freedom Park, LLC (MFP) is the developer for the 72-acre property at 1400 – 1550 Northwest 37th Avenue in Grapeland Heights beside Miami International Airport. The property is solely owned by the City of Miami, and is leased to MFP for 99-years with the intent of developing a world-class 25,000-seat Major League Soccer stadium for Inter Miami CF, a 600,000-square-foot Soccer Village with food, beverage and retail venues, 750 hotel rooms, 400,000 square feet of office space, and 5,100 parking spaces.

According to the Letter of Intent, the application is for a Special Area Plan (SAP), which is to facilitate parcels containing more than nine abutting acres of land to be master-planned to integrate public and private improvements, together with necessary infrastructure and to encourage design flexibility. A Miami Freedom Park Concept Book prepared by Arquitectonica has been provided to demonstrate the guidelines of the MFP SAP and visually illustrate the improvements anticipated at the property. All of the images included in this article are directly from the application. 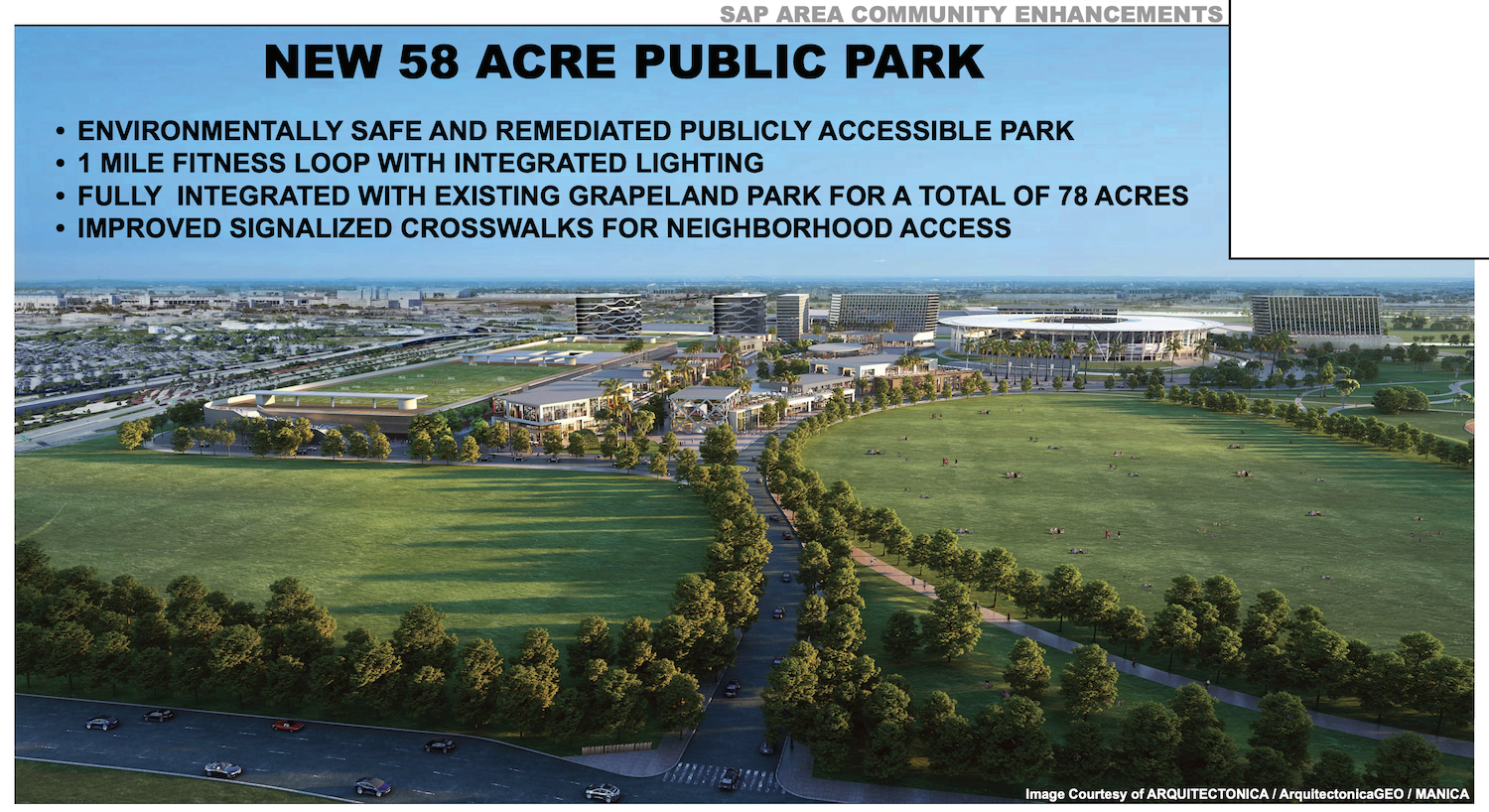 The purpose of the Soccer Village is to create an area for visitors to enjoy food, beverage, and retail options either in connection with soccer matches or as a community nestled among and intended to activate enhanced publicly accessible spaces such as parks, plazas, promenades, and other green areas. There would also be elevated football fields, soccer fields, basketball courts, and tennis courts, above the parking garage accessible to the public, as well as the approximately 240,000-square foot pedestrian promenade and the approximately 420,000 square-foot plaza civic spaces. The pedestrian promenade leads to the soccer stadium and serves as a gathering space for patrons and as the route for the pre-game entrance. 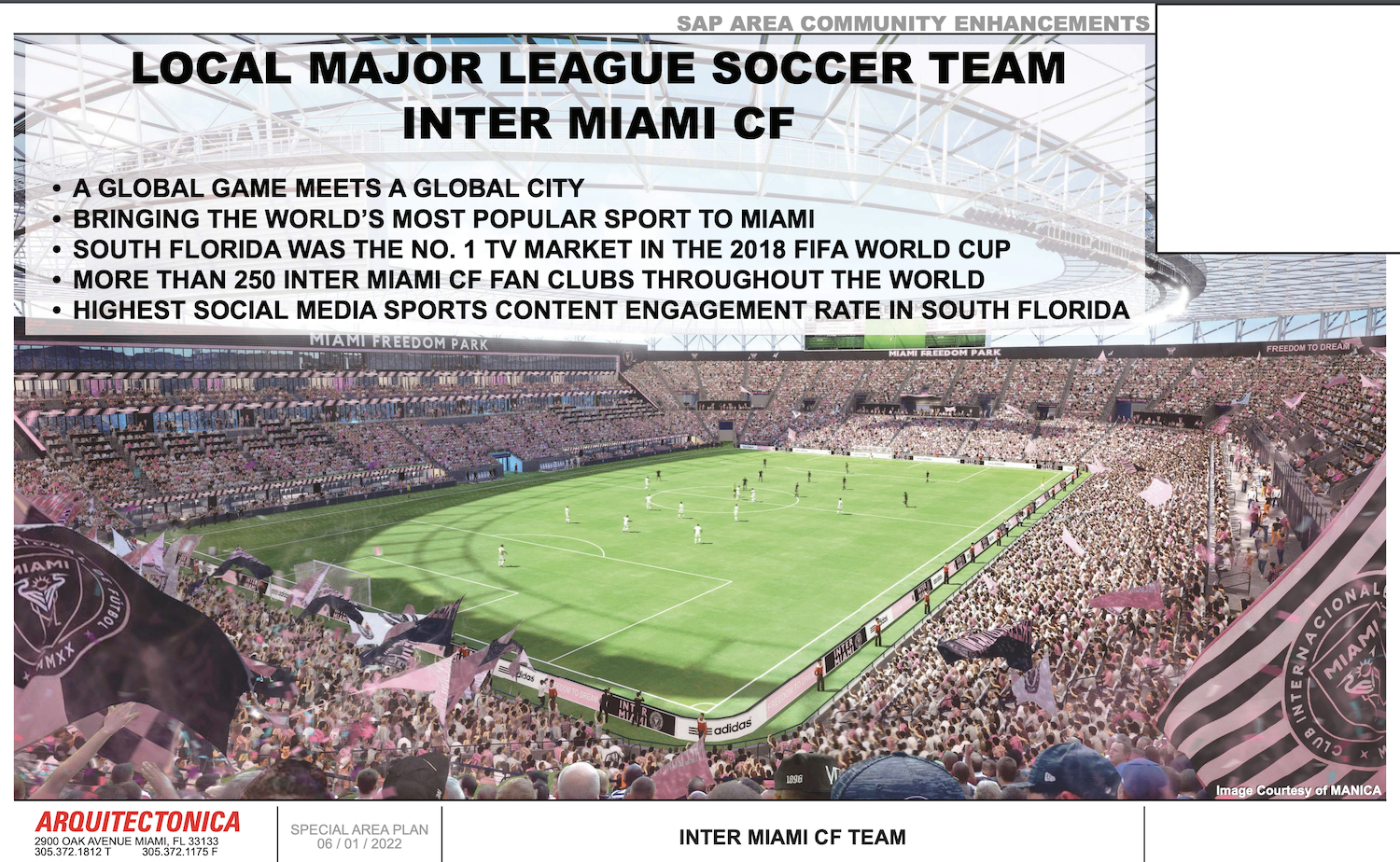 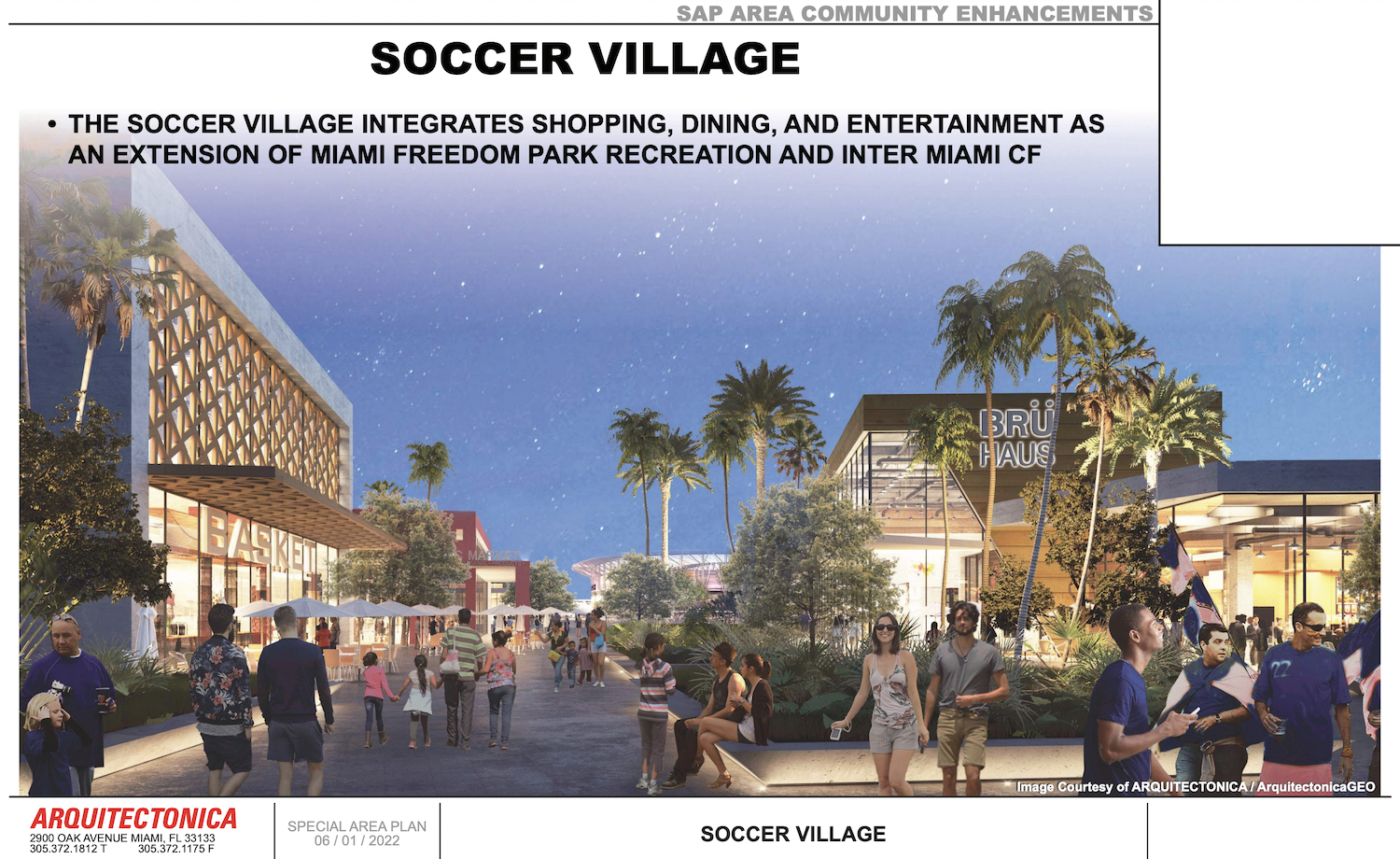 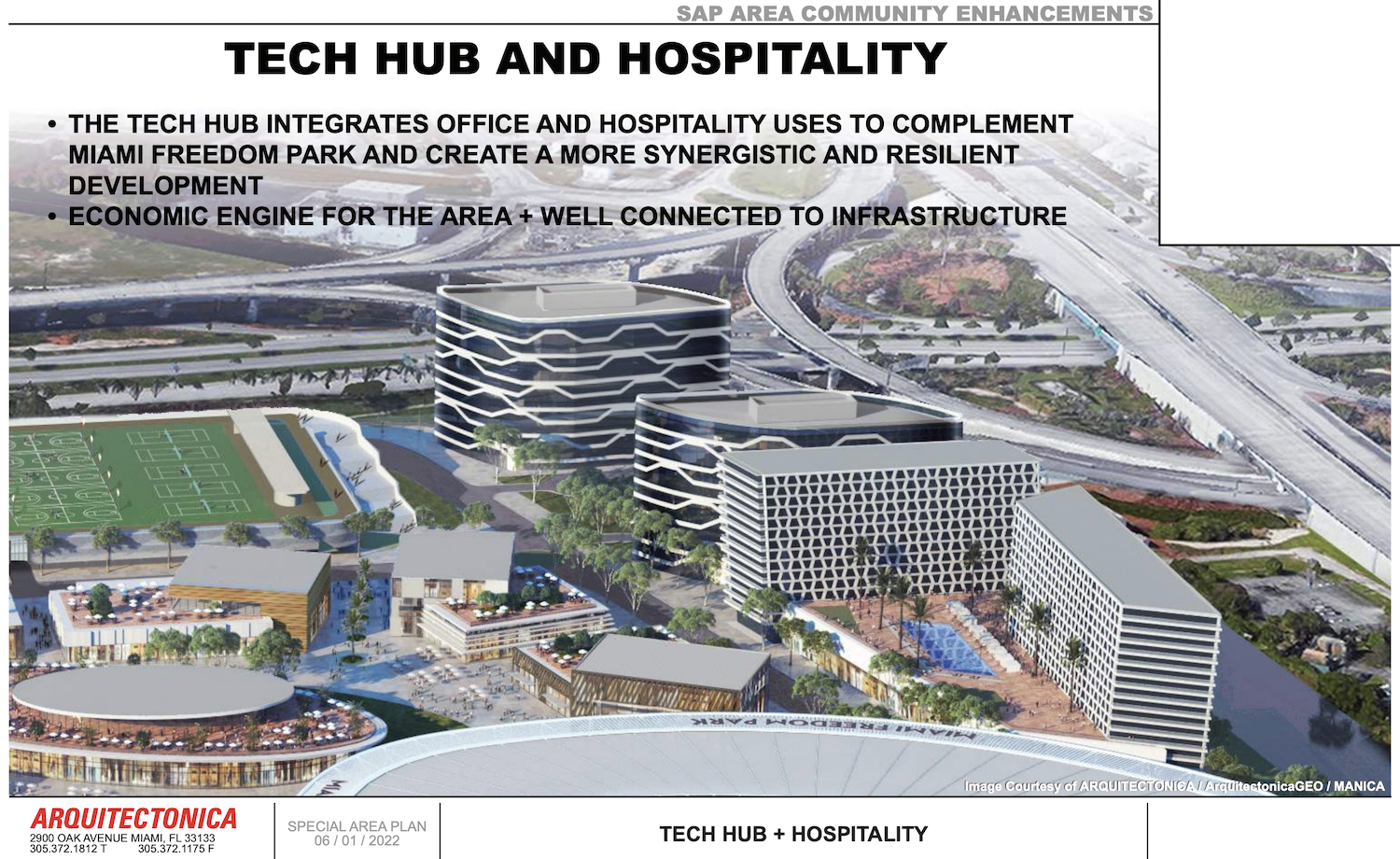 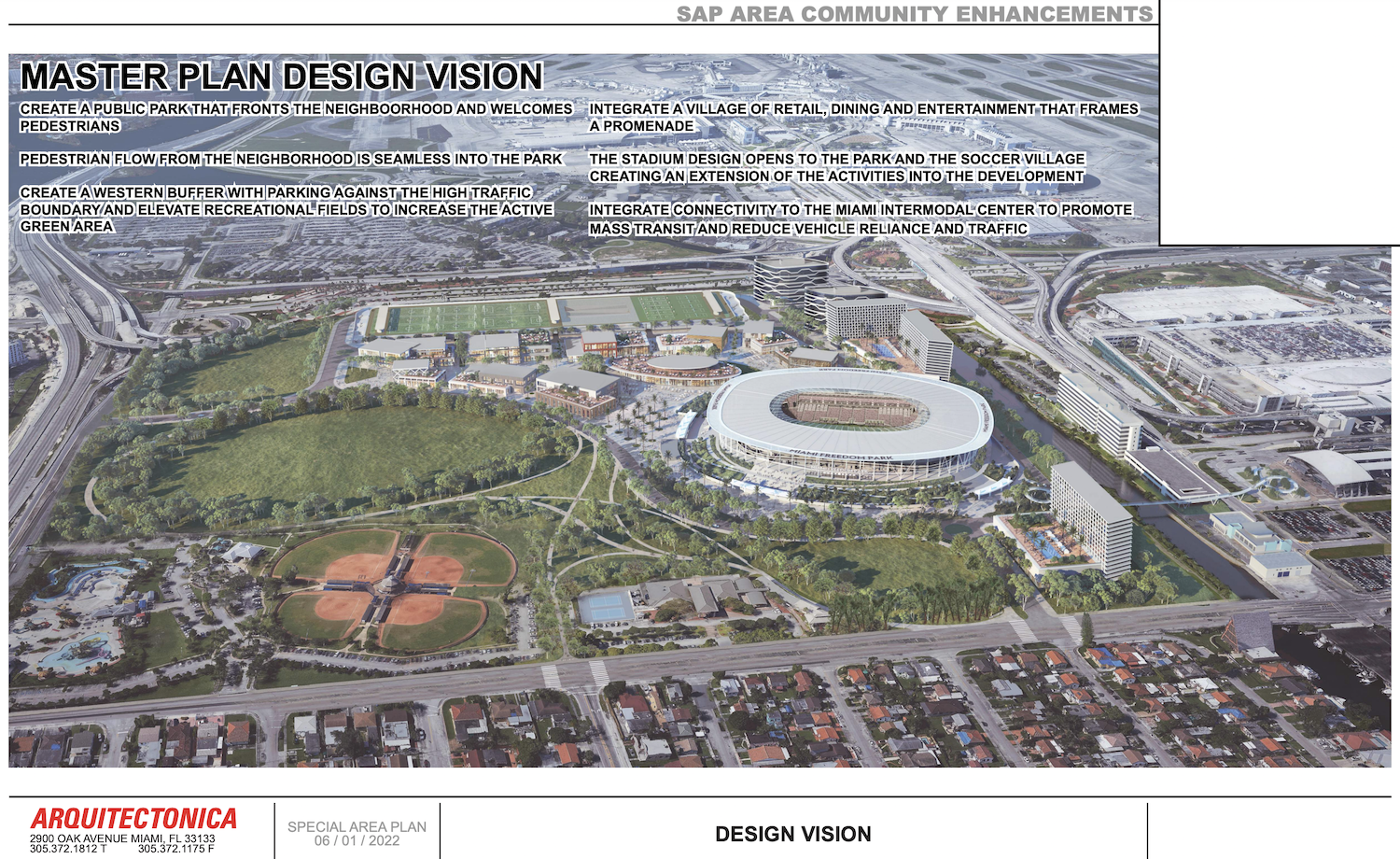 The full list of improvements to the 72-acre property include a 58-acre publicly accessible park, a 25,000-seat world-class, state-of-the-art stadium, tech hub offices and 750 hotel rooms, multipurpose fields and covered parking, the Soccer Village for food, beverage and retail, integrated bike paths and racks for over 255 bikes, a proposed mass transit connector, and integration of an existing water park and baseball fields. 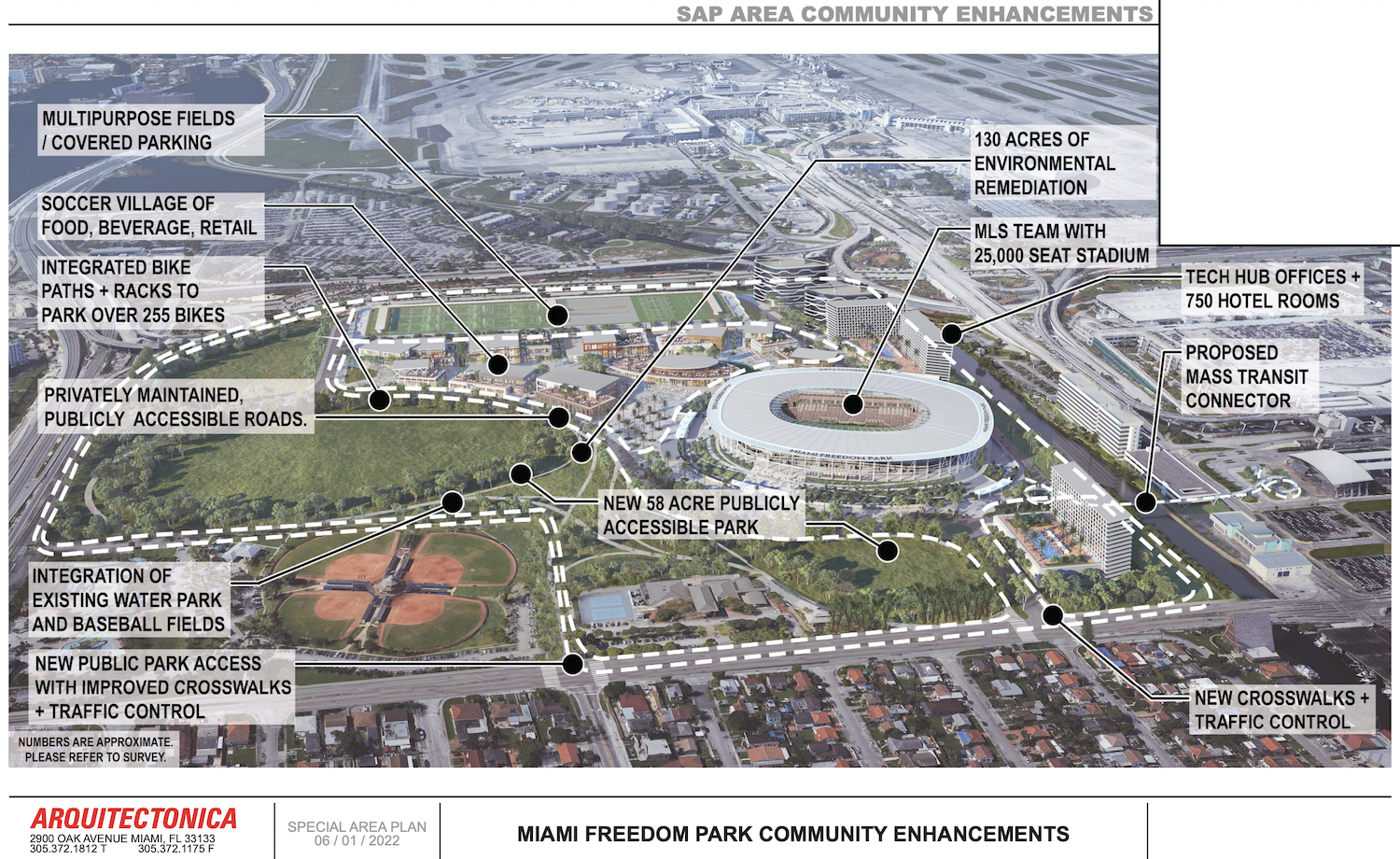 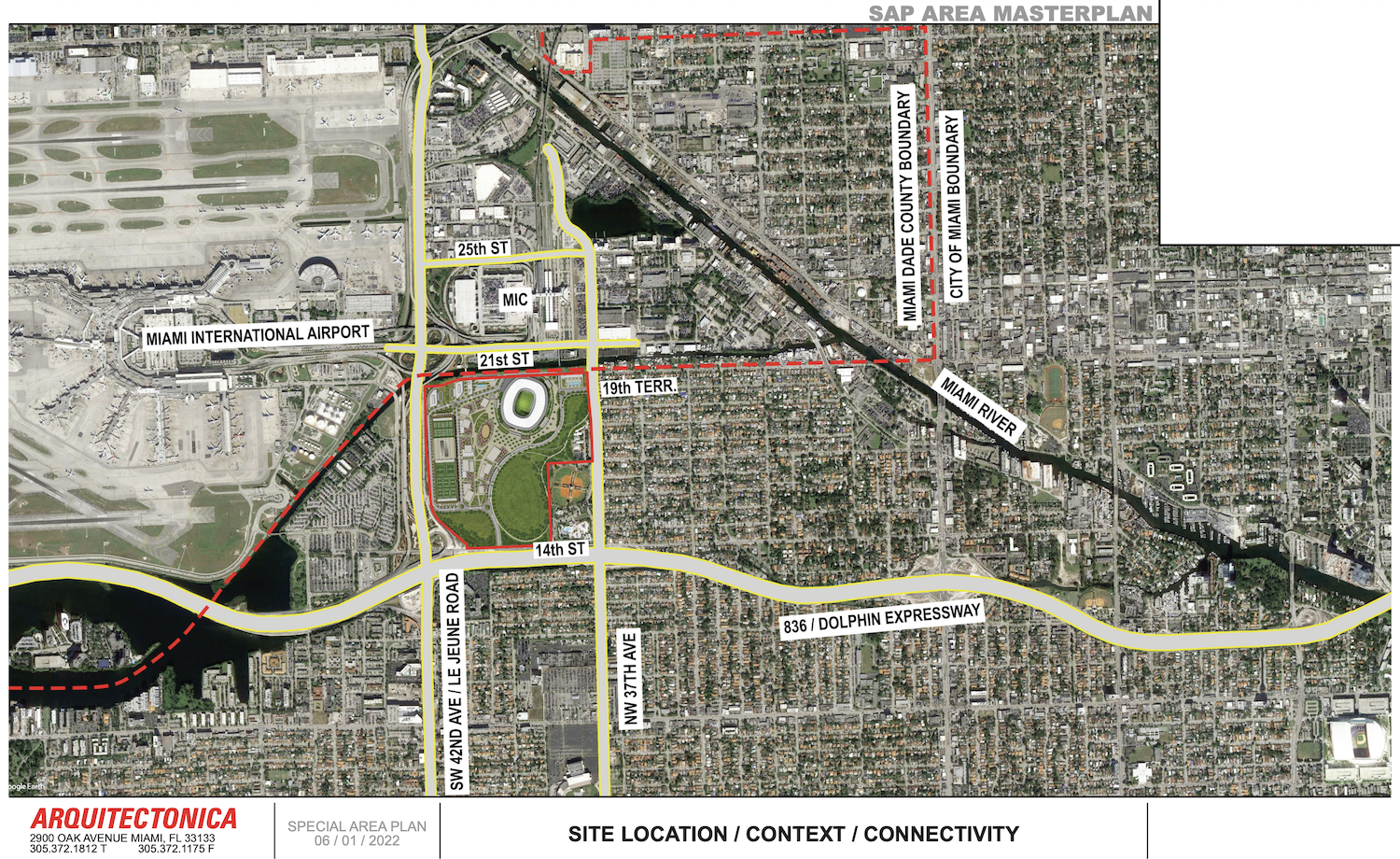 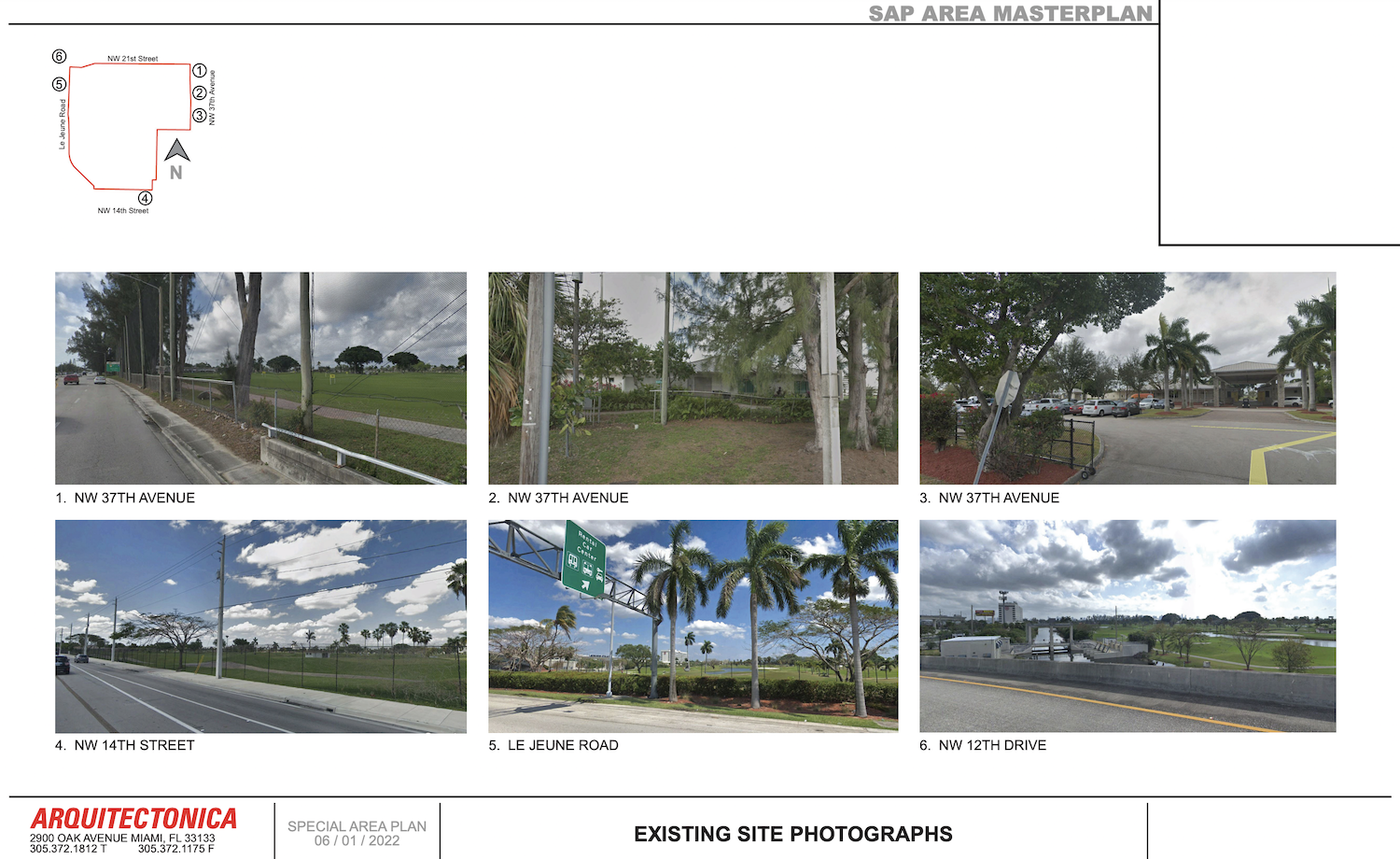 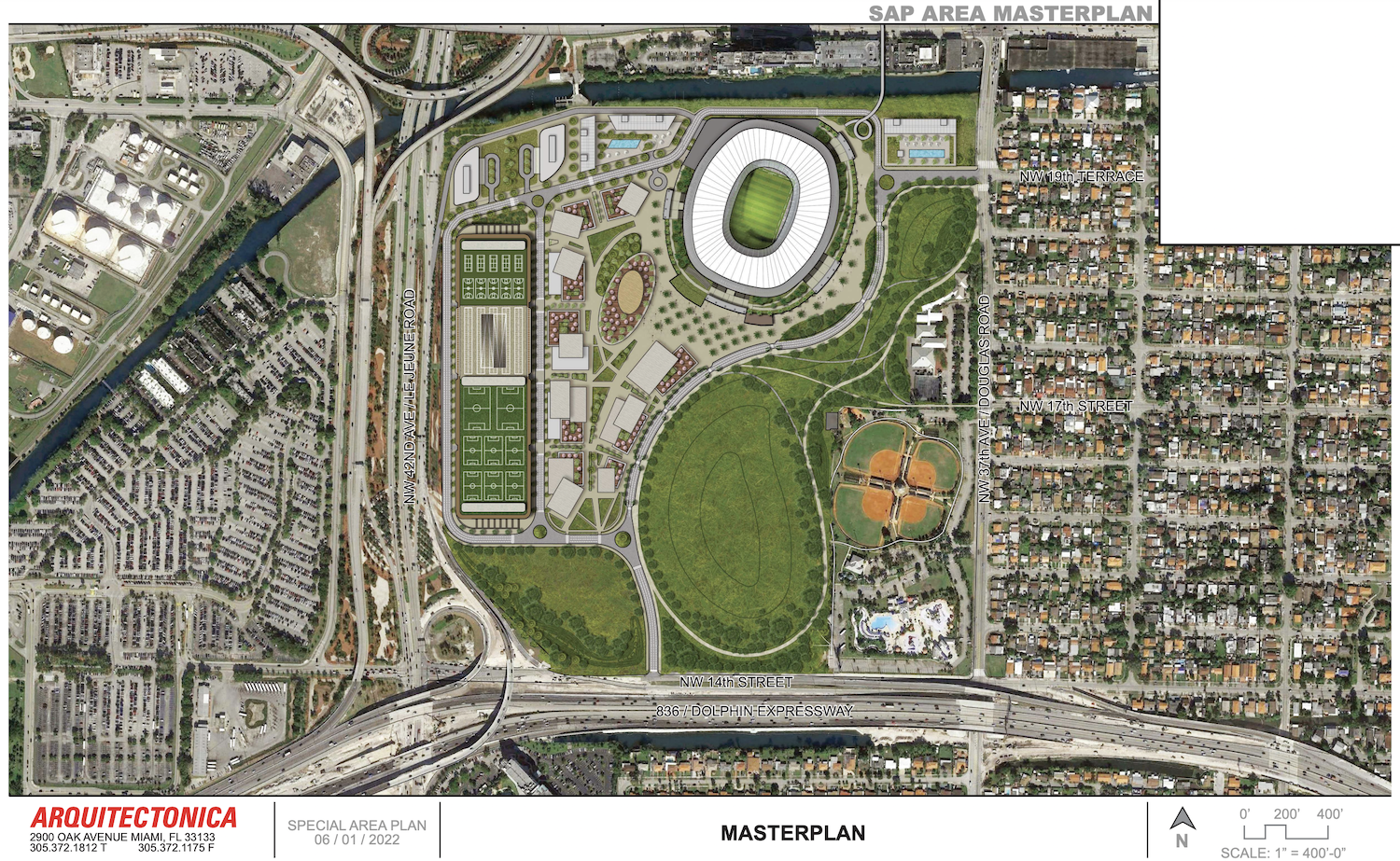 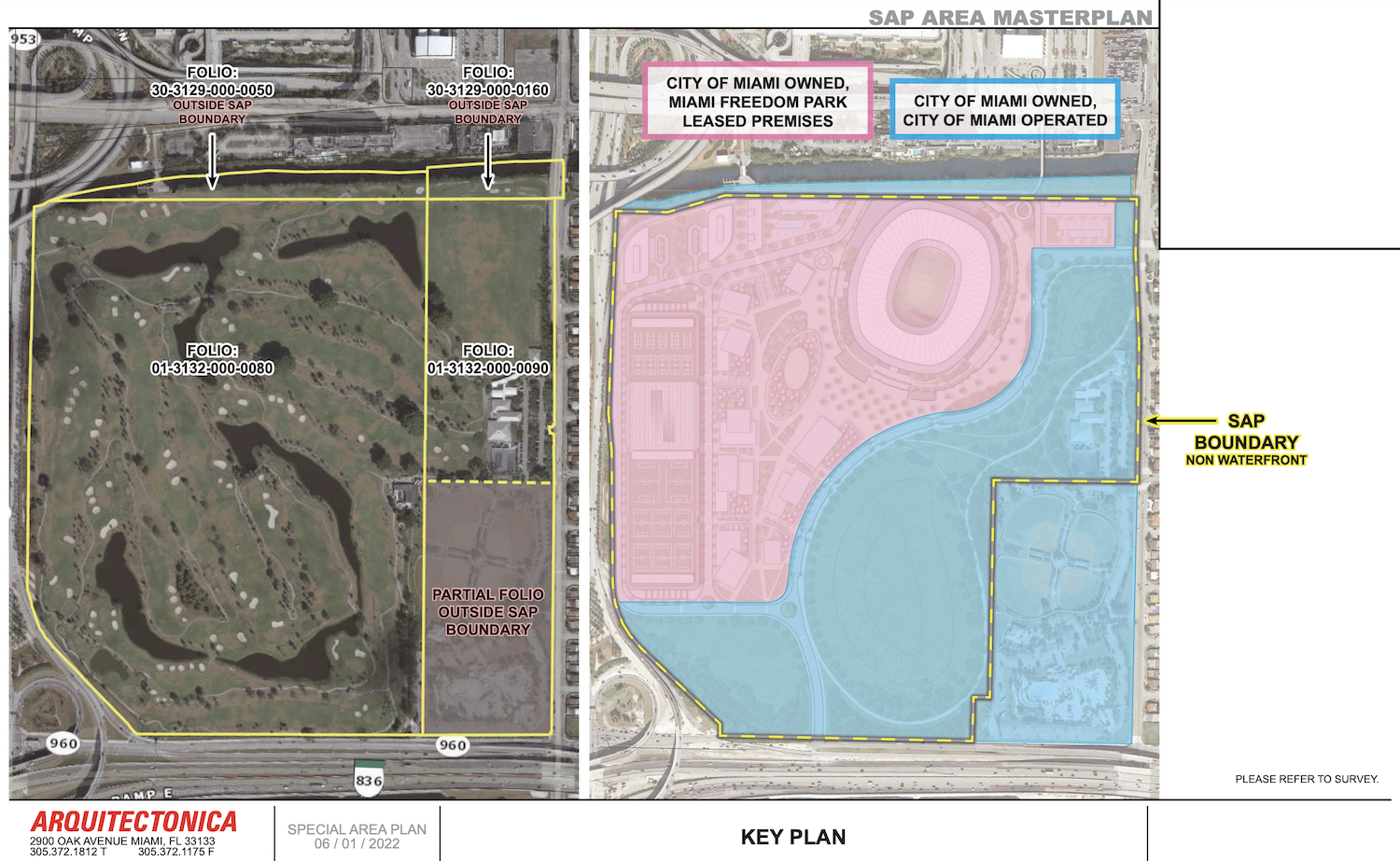 All newly constructed buildings will comply with current FAA restrictions. Based on the diagram below, the tallest structure may rise to approximately 160-feet. 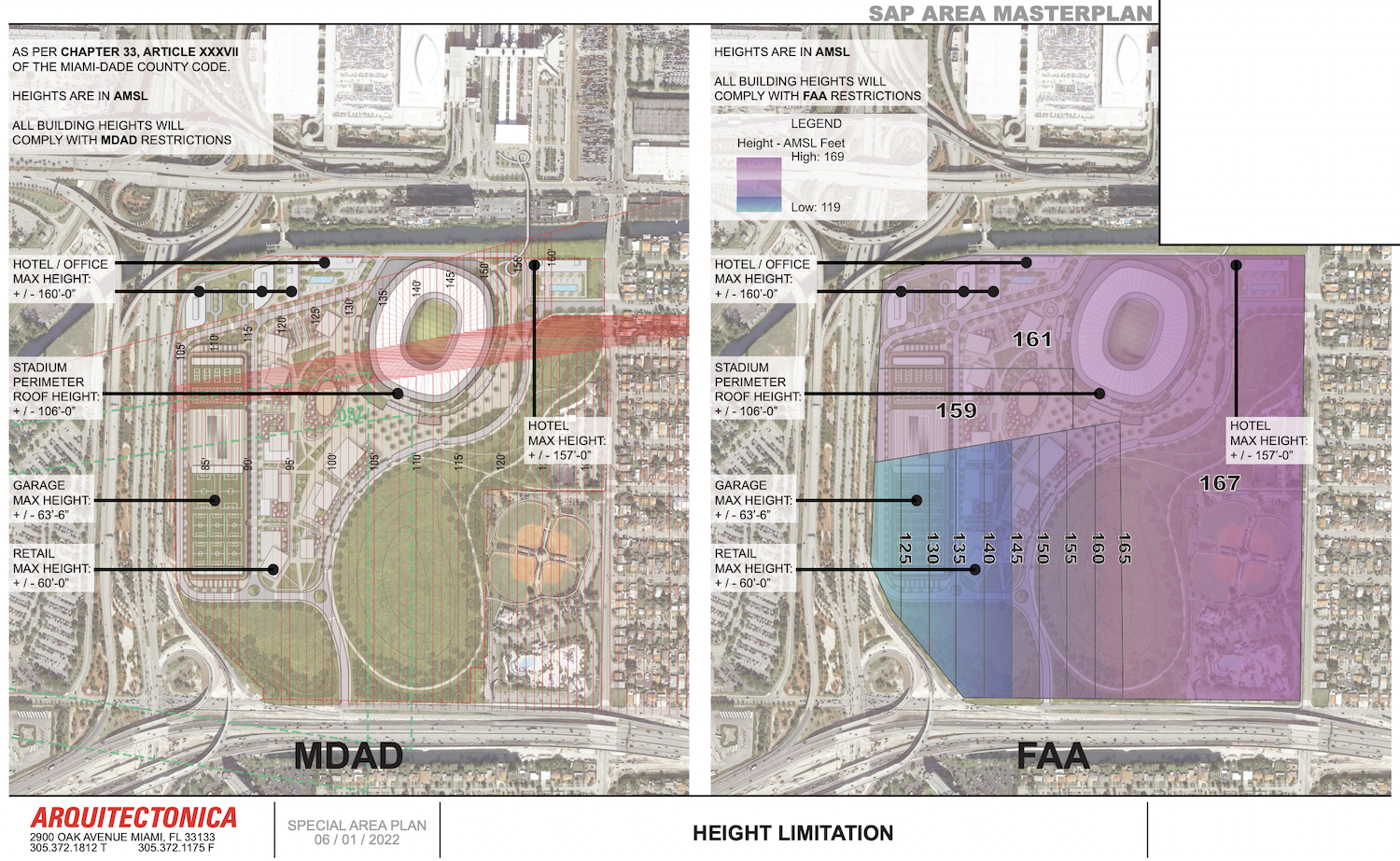 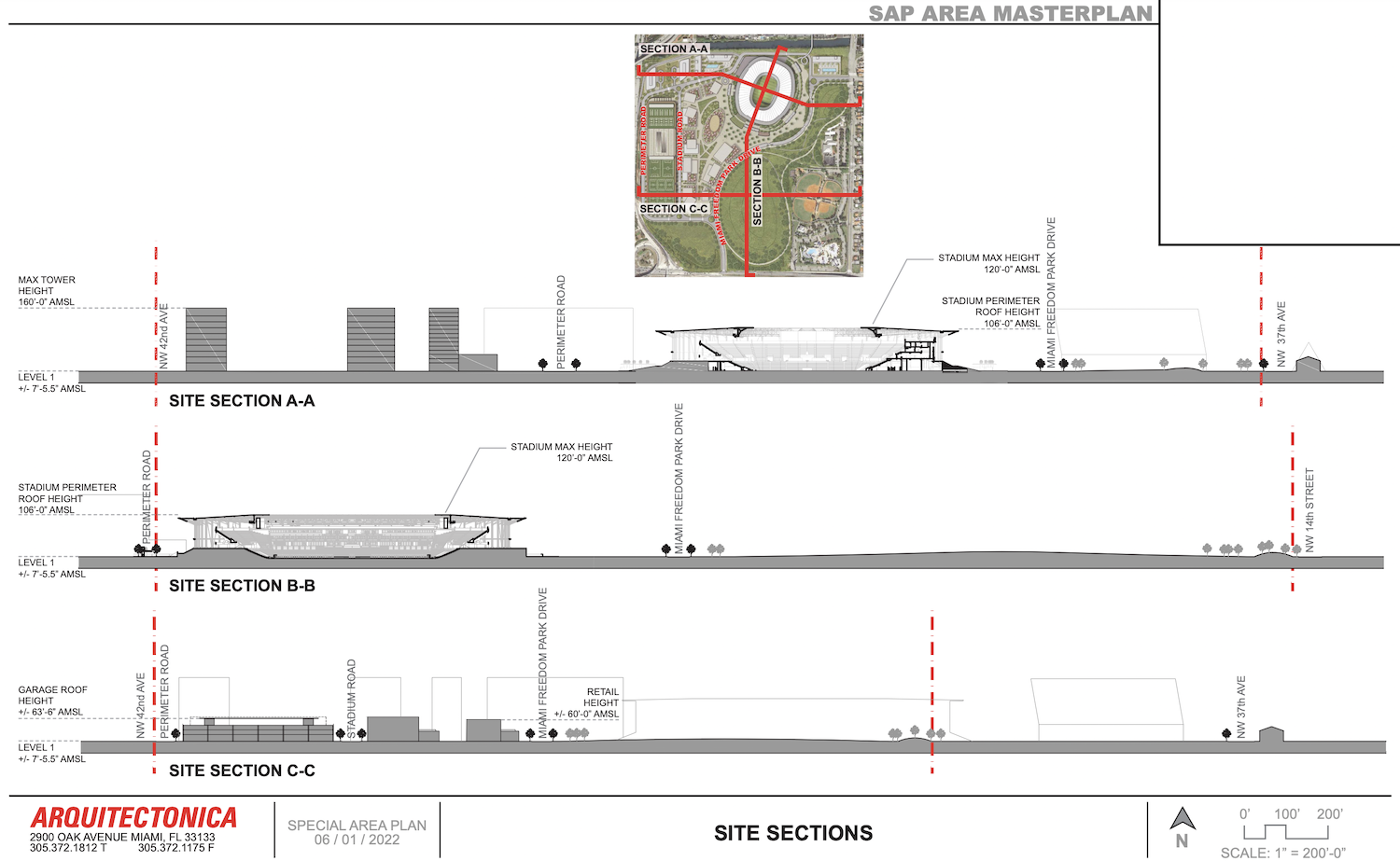 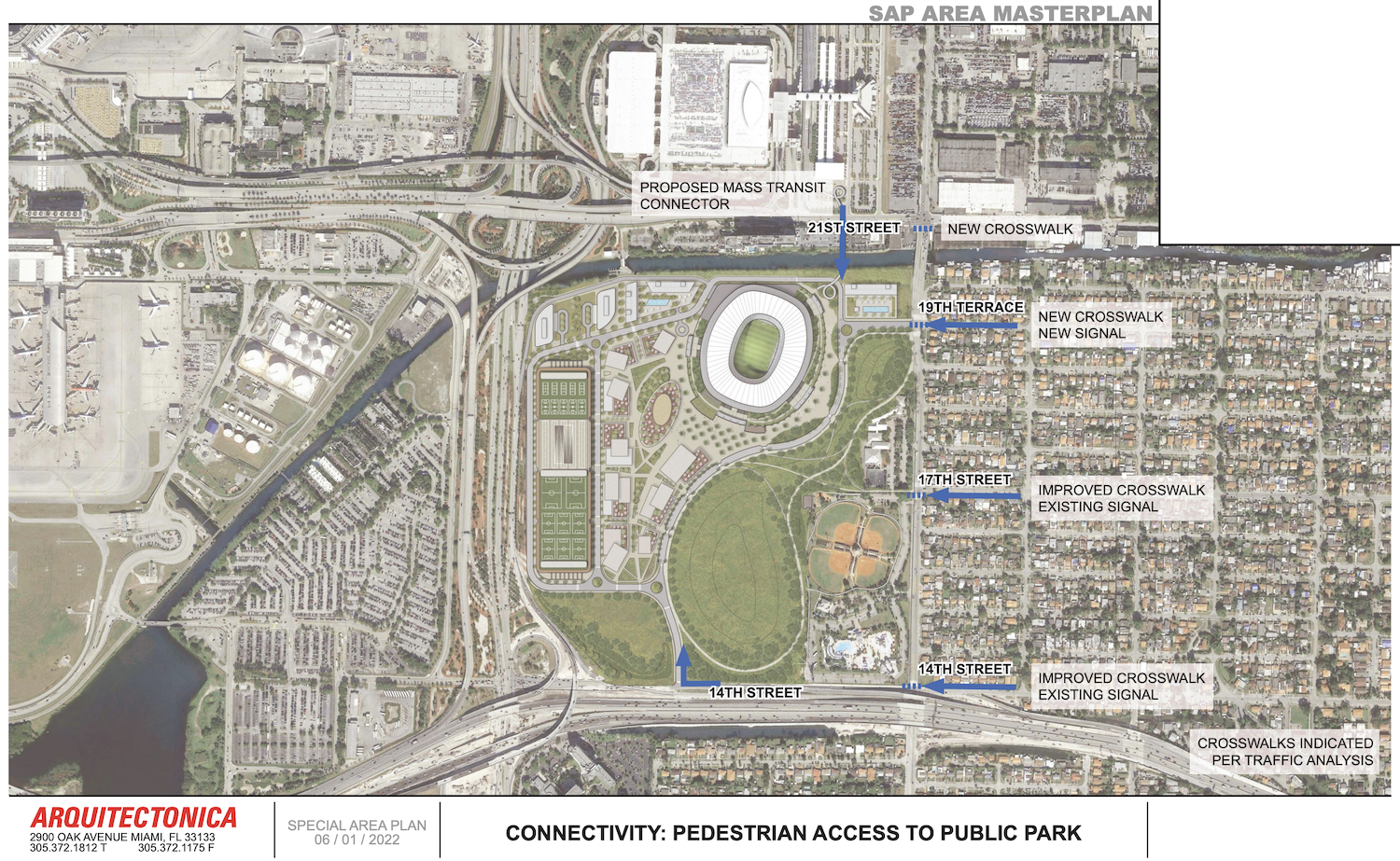 A proposed mass transit connector would connect the property to Miami’s Metrorail, Metrobus, Tri-Rail, Metromover and the Miami Trolley. Renderings show this may come in the form of a pedestrian bridge crossing over Northwest 21st Street into the Miami Intermodal Center. 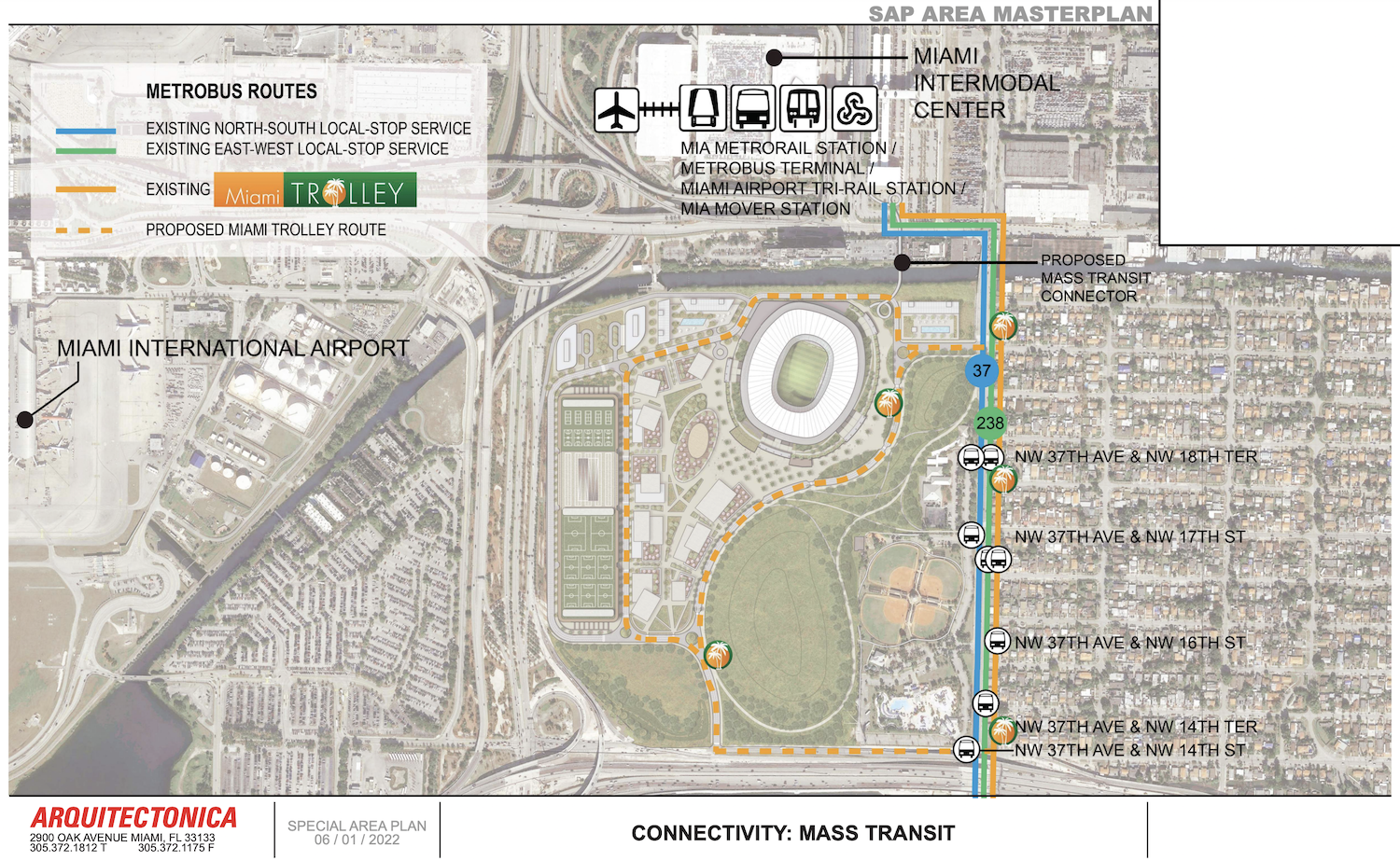 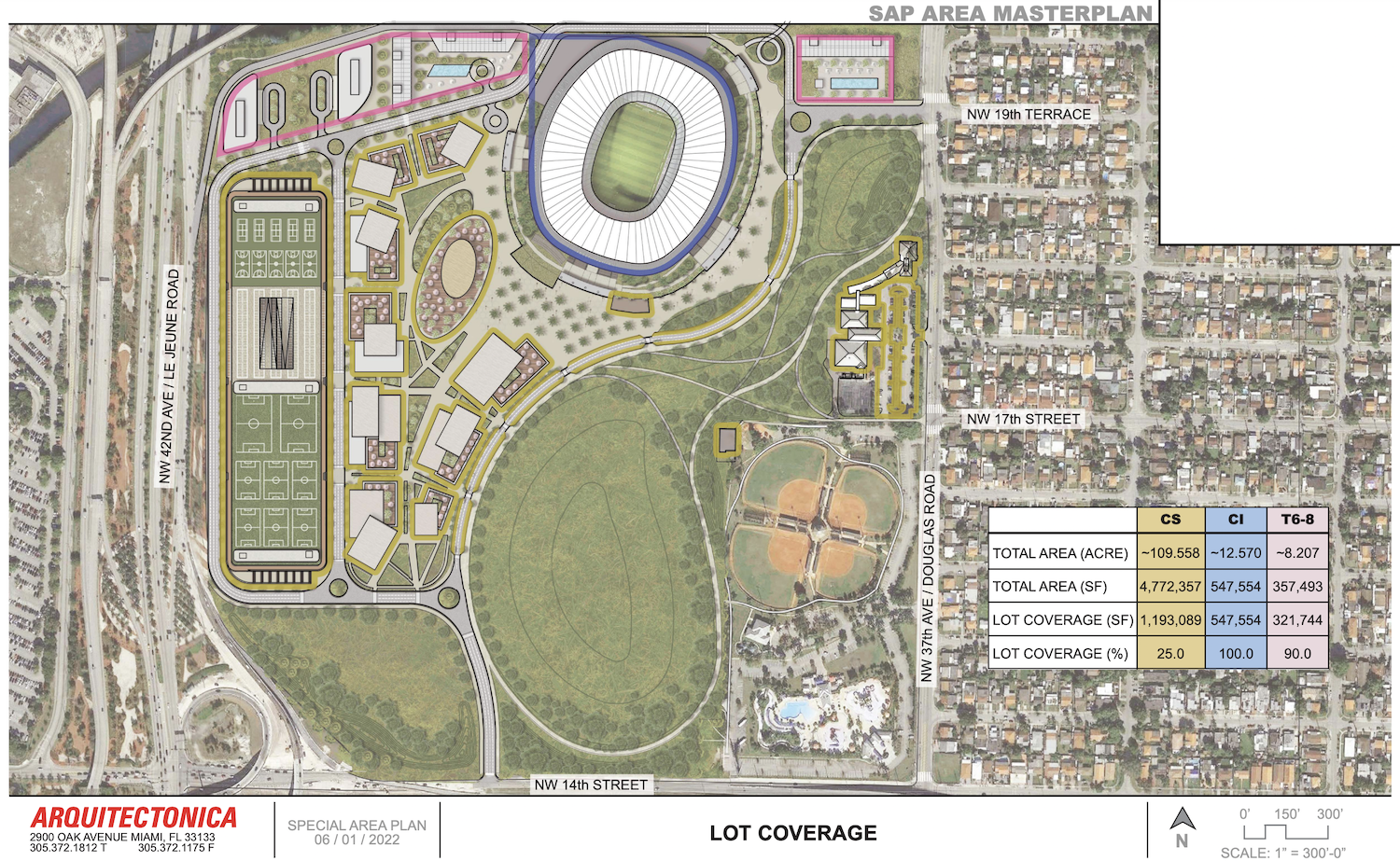 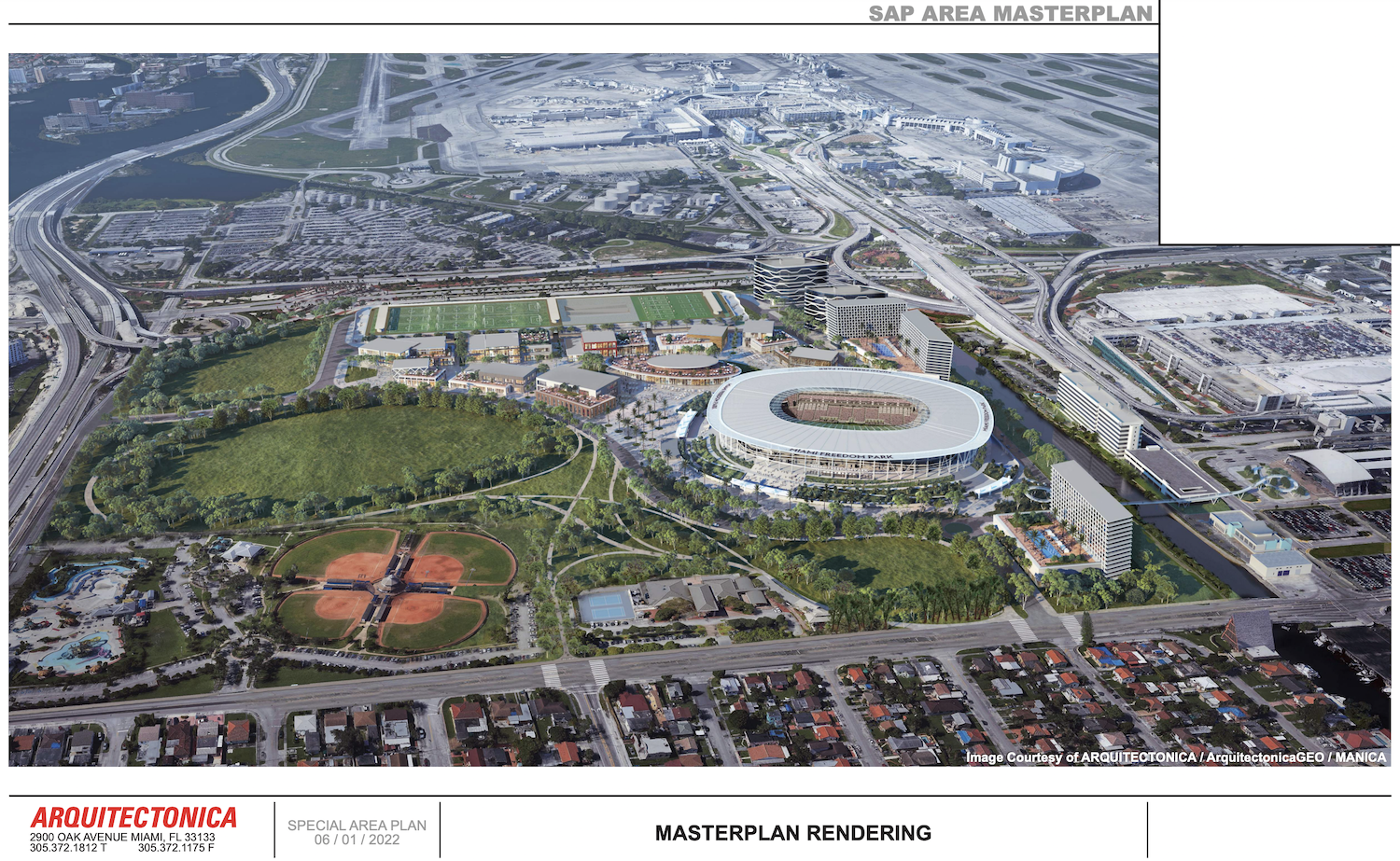 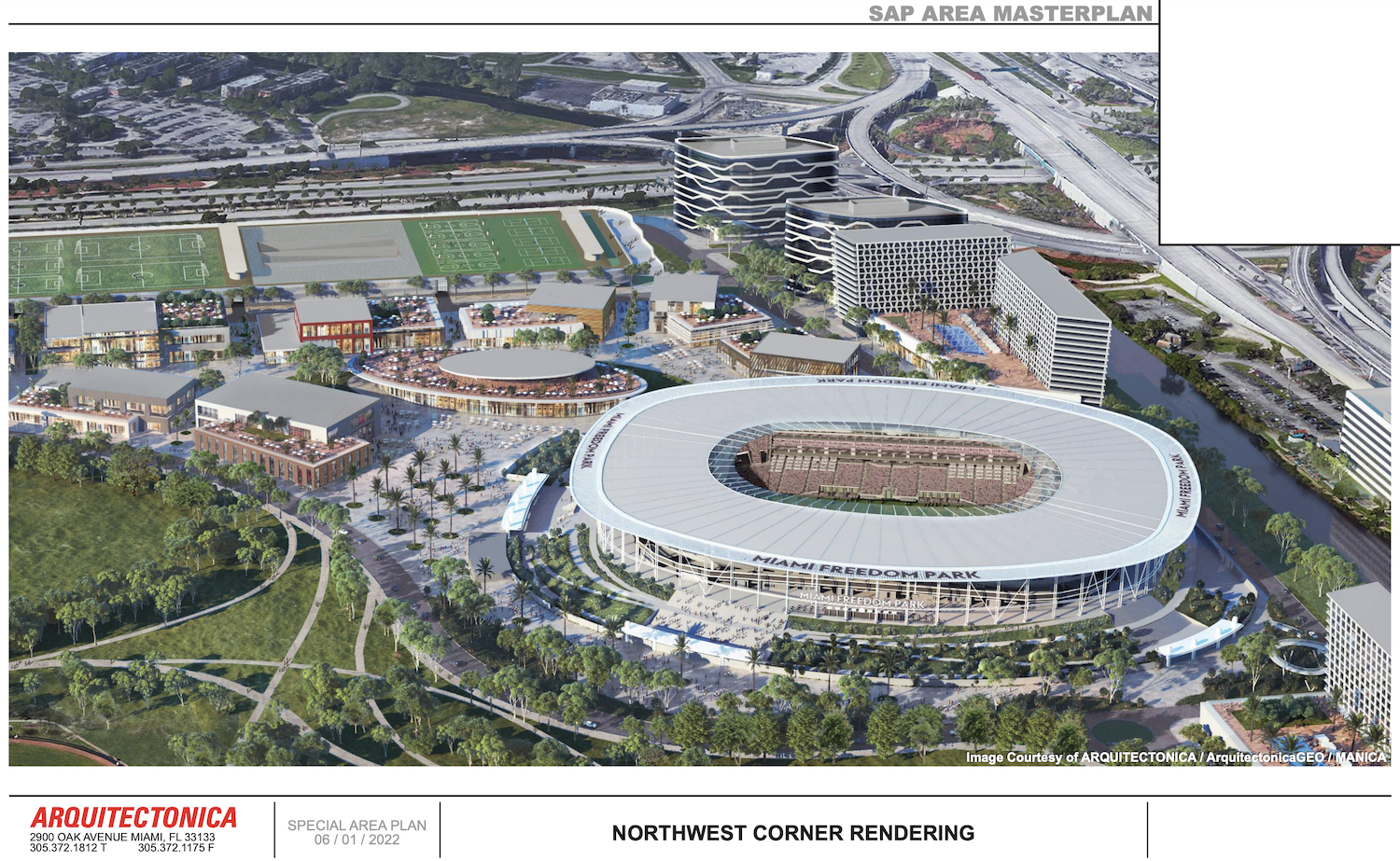 The stadium is designed in collaboration with Kansas City-based Manica Architecture, a leading design firm for arenas and stadiums. 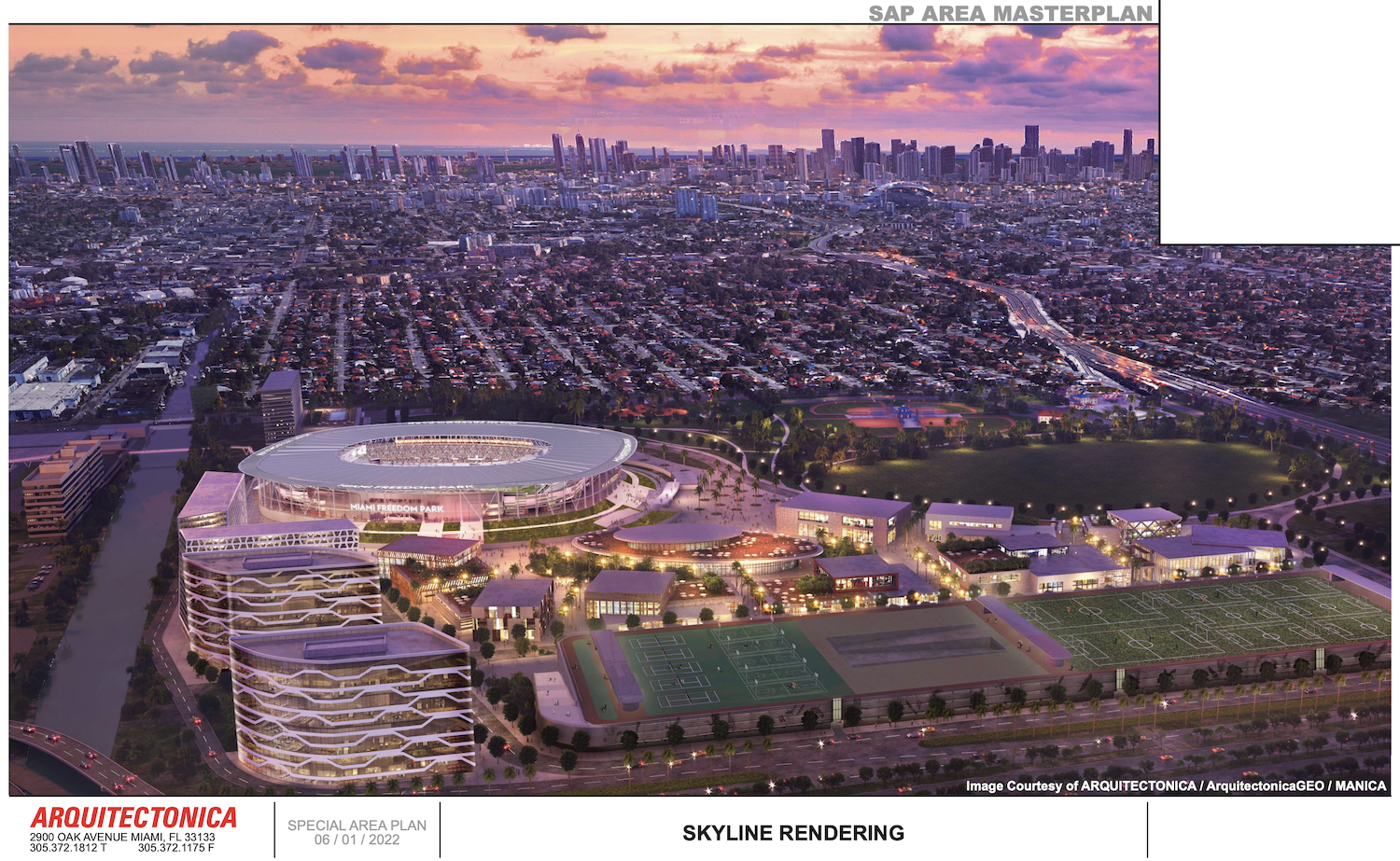 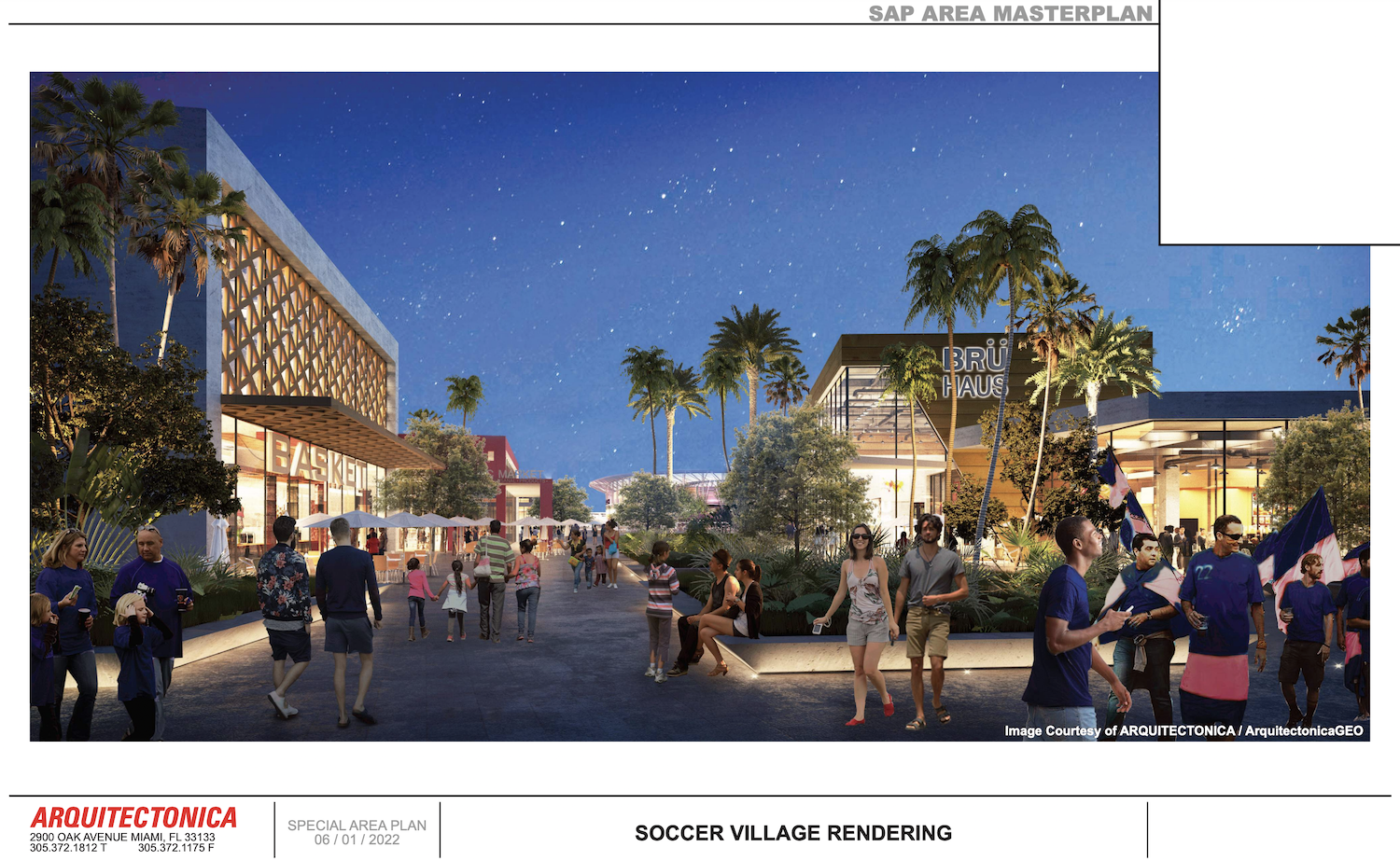 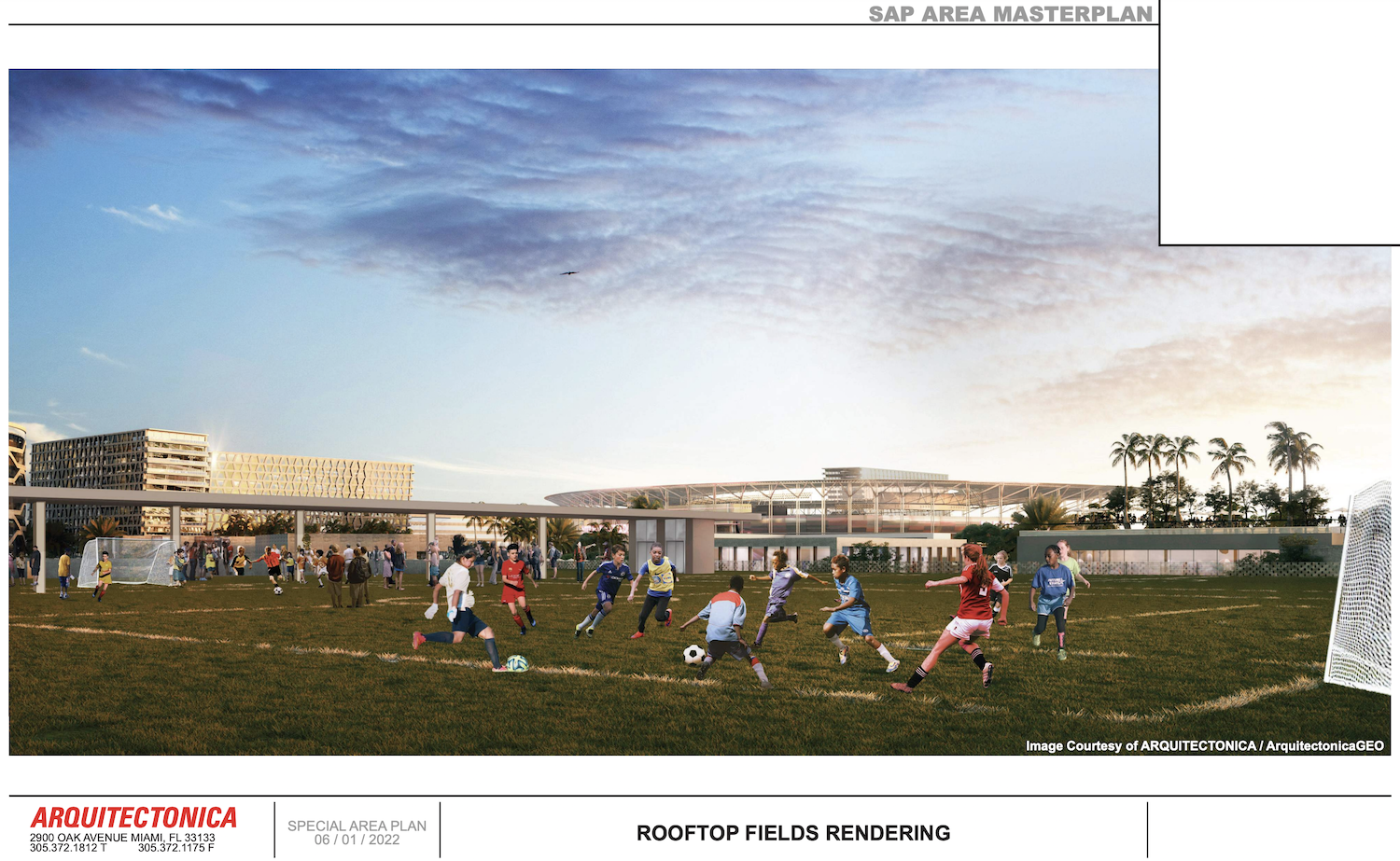 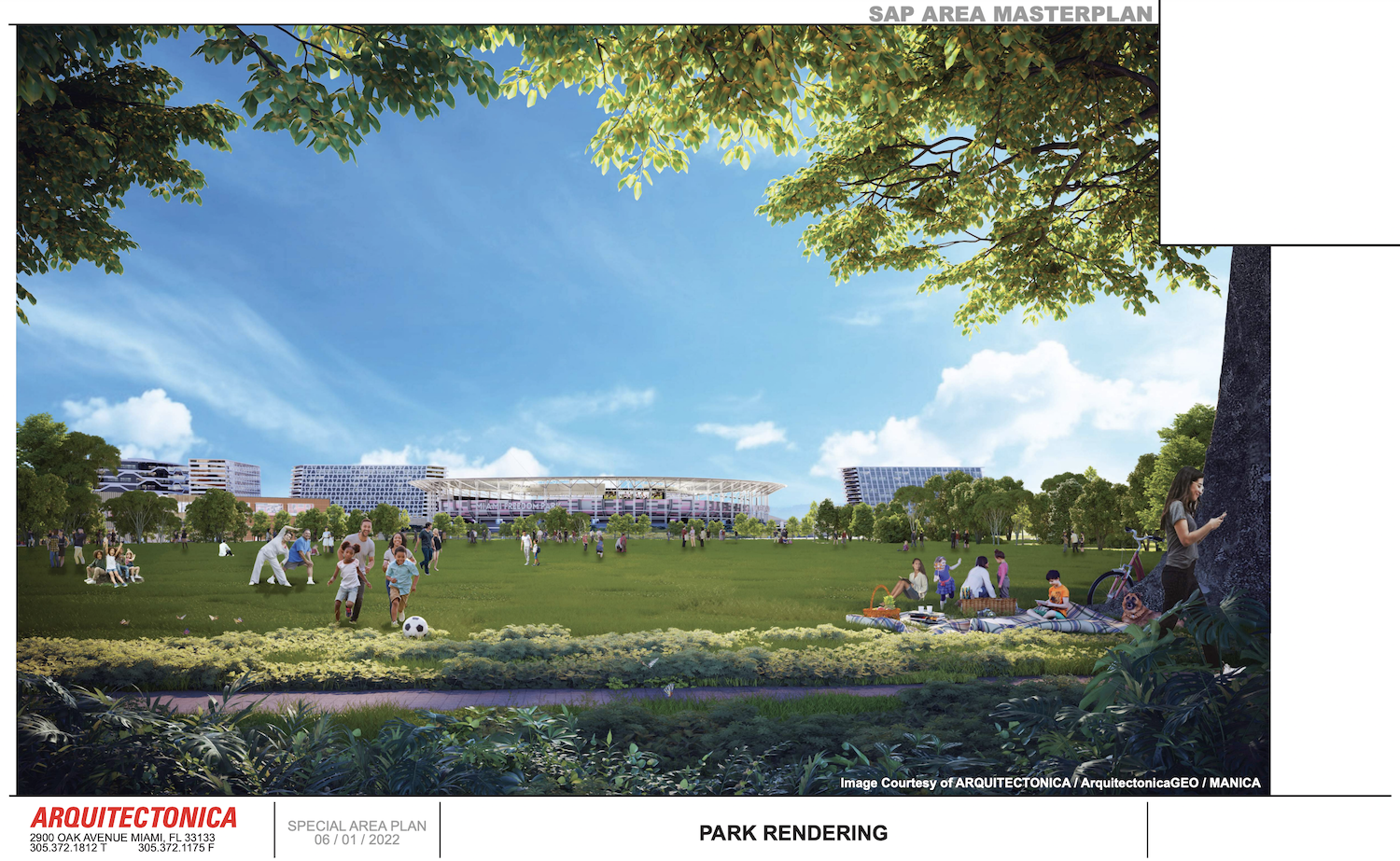 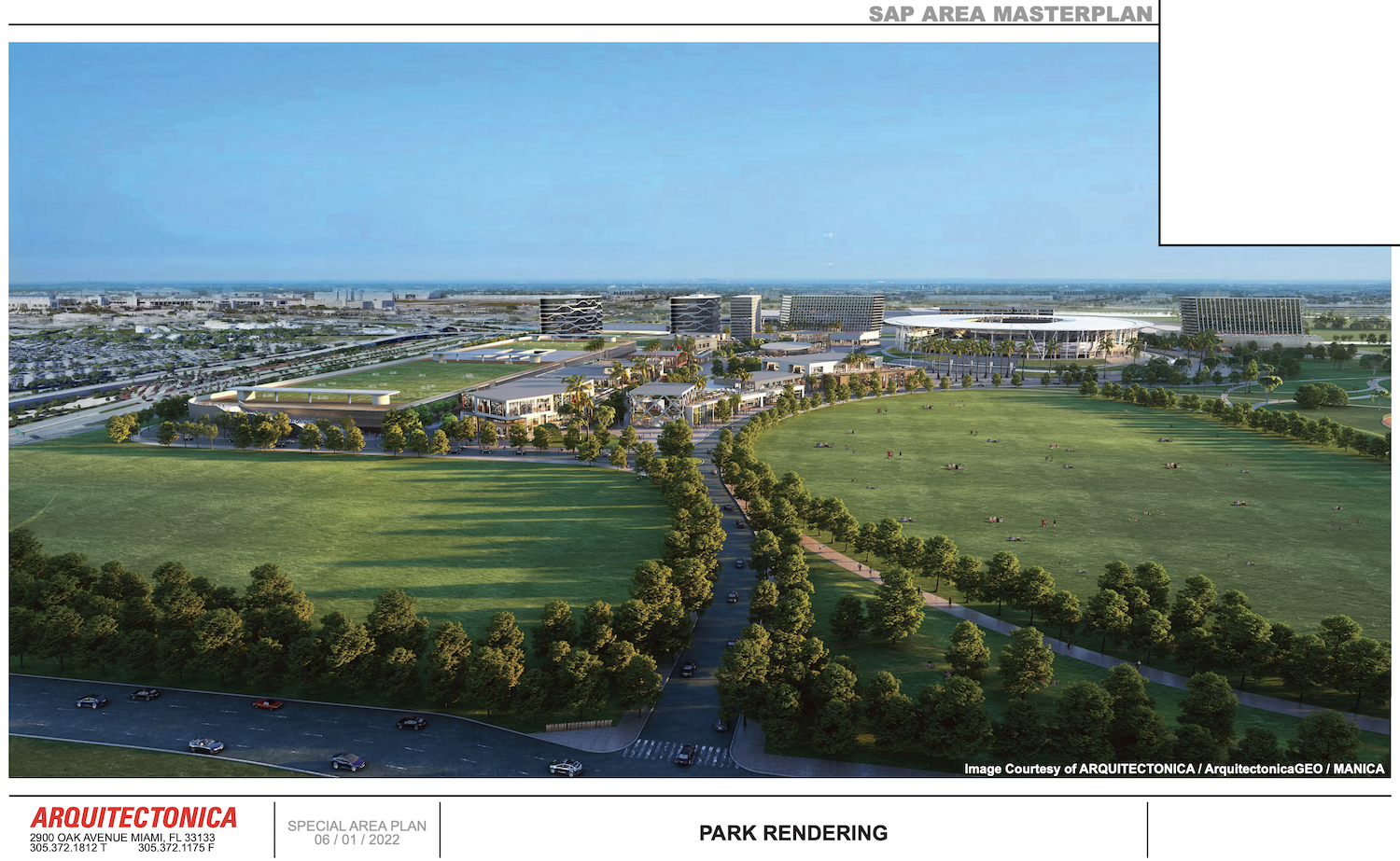 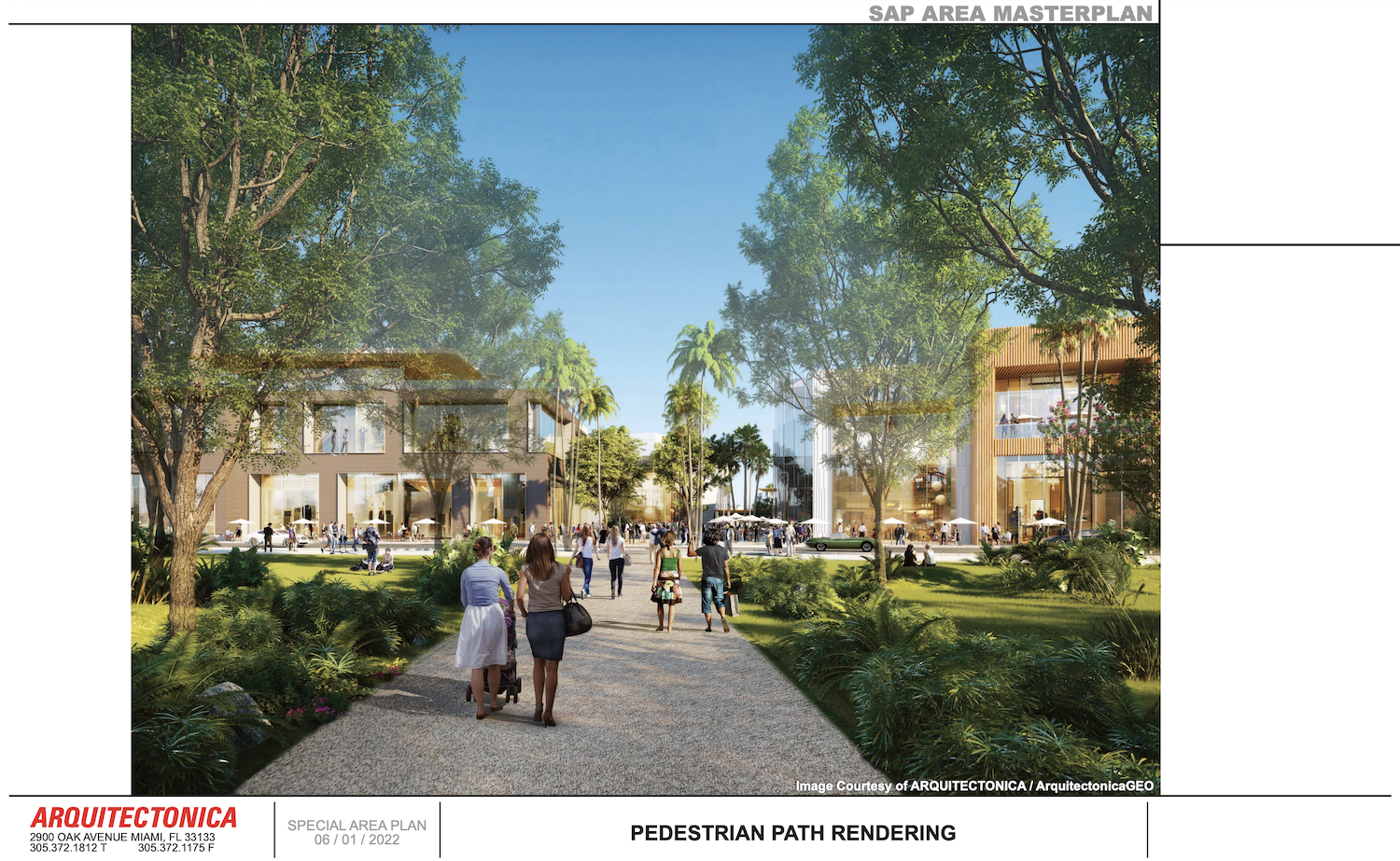 Rendering of the pedestrian path.

Miami’s Urban Development Review Board was scheduled to review the proposal on June 15, 2022.