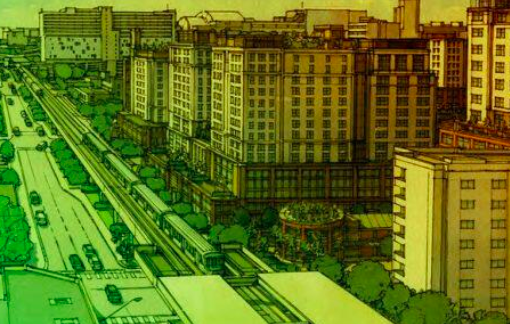 NR Investments hopes to move forward with a new mixed-use development in Miami-Dade County, Florida. The Miami Herald reports that the residential aspect could comprise 2,500 homes spread across multiple buildings. The Real Deal notes that plans don’t indicate how tall the buildings are, but in Miami, most buildings cannot exceed 30 stories.

Of those units, 500 are designated as workforce housing, intended for those making 100 to 140 percent of the area median income. Other features include a 300-key hotel, 200,000 square feet of office space, and 100,000 square feet of retail. Communal amenities comprise five acres of public greenspace.

A sidestreet view of the future build site.

At this time, the development does not have an official name, yet some sources call it “13th Street Mixed-Use Development.” It’s estimated to cost $1.1 billion to complete, and construction could start in October 2023. As of September 2, 2022, developers have submitted plans to the City of Miami for review.

They’re requesting a 99-year lease on the 18-acre site. As noted, NR Investments is the project’s owner, and Duany Platter-Zyberk & Company is the master planner. Residents in Miami-Dade County are divided regarding the project’s approval. Some note that it’s a good affordable housing opportunity, while others fear it will drive long-time residents out of the area.

An aerial view of the general area.

Be the first to comment on "NR Investments Proposed Mixed-Use Development in Miami-Dade County, Florida"