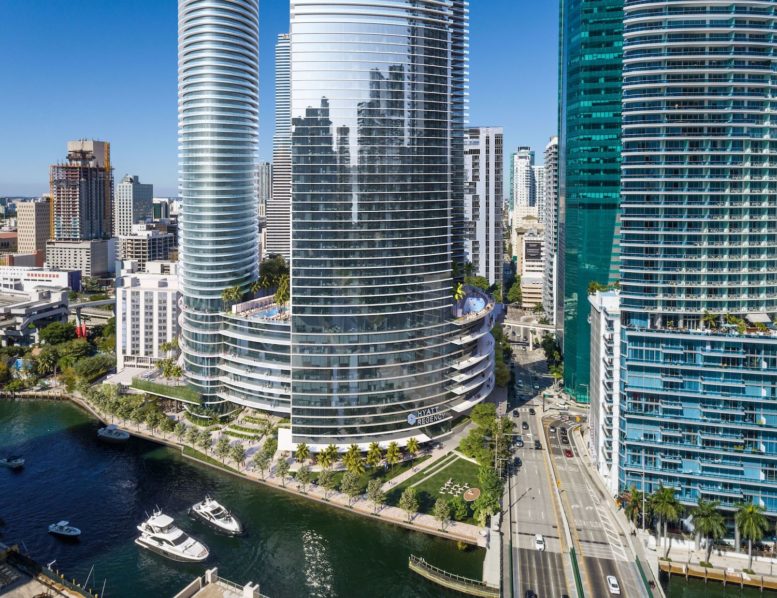 Leading global hospitality company Hyatt has teamed up with Miami-based luxury hospitality and residential developer Gencom to redevelop Downtown Miami’s iconic Hyatt Regency Miami at 400 Southeast 2nd Avenue, with the goal of making improvements in and out of the urban core, and activating a key piece of Miami’s riverfront. Designed by Miami-based Arquitectonica, plans for the site include three towers offering residents and hotel guests panoramic views of Downtown Miami and Biscayne Bay. Towers one and two would rise 61-stories and include 682 multifamily apartments, a 615-room Hyatt Regency with over 100,000 square feet of meeting space, and 264 serviced apartments; the towers would be linked at the top by a Skybridge featuring an upscale destination restaurant and lounge perched 700 feet over the city. Tower three would become one of the tallest buildings in South Florida rising 1,049-feet, anticipated to include 860 residential apartments. 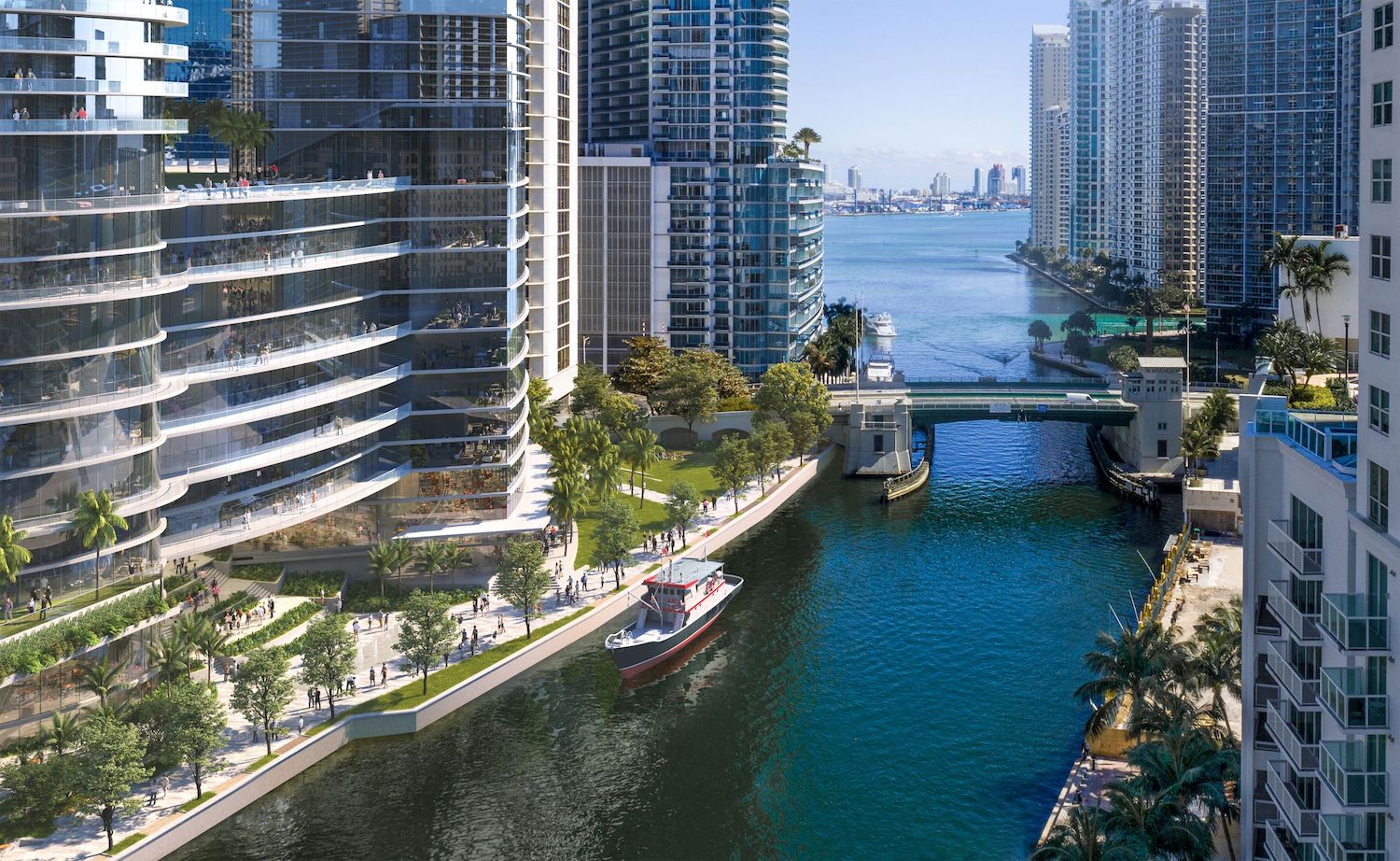 “The City of Miami had the foresight to designate this property for an upscale hotel and meeting complex that would establish Downtown Miami as a hub for tourism, business and major events. In the four decades since, Hyatt Regency Miami and the James L. Knight Center have helped fuel downtown’s rise as a thriving hospitality, residential and commercial district,” says Phil Keb, Executive Vice President of Development at Gencom. “Our team’s privately financed upgrades will help ensure the Hyatt hotel site remains a critical economic engine for decades to come, while unlocking benefits in the form of new public space along the Riverwalk, improved access, upscale housing, and increased revenue for the city.”

“The Downtown area where Hyatt Regency Miami is located represents a nexus between the Brickell Financial District and the Central Business District, and it sits at a vital entry point for many people entering the urban core,” adds Bernardo Fort Brescia of Arquitectonica. “Redeveloping this land is an opportunity to rethink the way people will access this site over future decades – by foot, bike, train, car, and boat. The new vision for this development will enhance the flow in and out of Downtown and create vital public space along the Miami River, which is growing in importance as more people take residence in the neighborhood.” 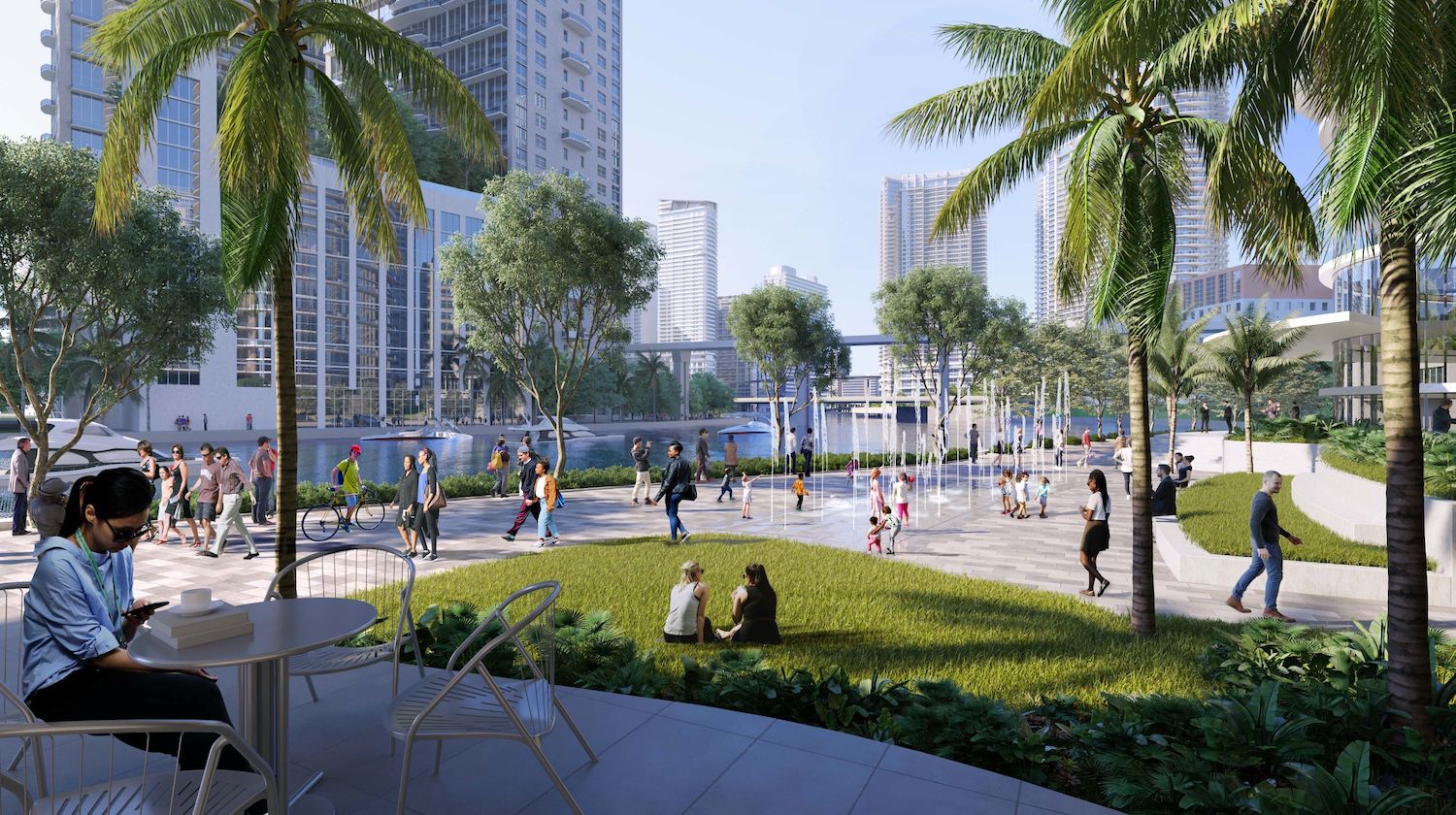 “This proposed redevelopment represents a strategic opportunity to thoughtfully reinvest in the Downtown Miami community, which we have proudly been a part of since Hyatt Regency Miami opened its doors in 1982,” said Pete Sears, Americas group president, Hyatt. “With Gencom, we remain committed to pursuing redevelopment plans that add value to the Miami community and demonstrate care for our guests, colleagues and customers.”

The development’s planned multifamily and hotel components will meet growing demand among new residents and visitors. Downtown Miami currently attracts six million visitors each year, more than 120,000 people now call the district home, and the neighborhood’s existing base of residential apartments is approximately 95 percent occupied, according to the Miami Downtown Development Authority. 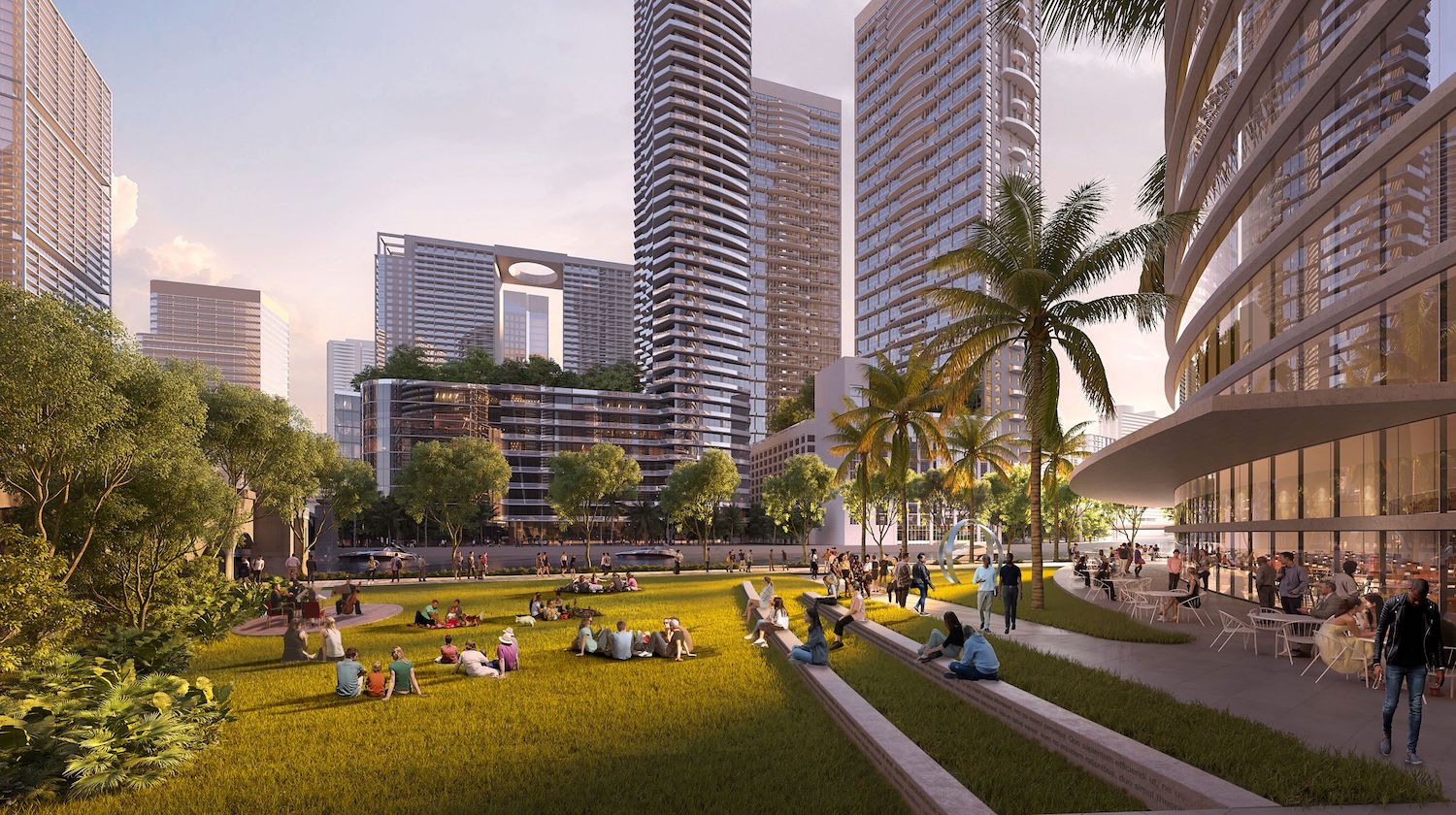 In reconfiguring the existing site, the venture plans to improve access in and out of the property. A large arrival and drop-off area within the development’s footprint will alleviate vehicular congestion on surrounding streets. The development will complete a key portion of the long-anticipated Miami Riverwalk, creating a riverfront promenade spanning more than 480 feet in length. These improvements will create seamless connectivity with Biscayne Bay and Bayfront Park to the east, as well as the Metromover’s Riverwalk station to the west. An improved pedestrian bridge will offer residents, guests, and meeting attendees direct, covered connectivity to the Metromover’s Knight Center Station. Four zones within the site will be designated for bike parking. Additionally, the team is exploring further activation of a ferry dock along the riverfront which is presently used by a water ferry service between Downtown Miami and Miami Beach.

The existing Hyatt Regency Miami was built in 1982. 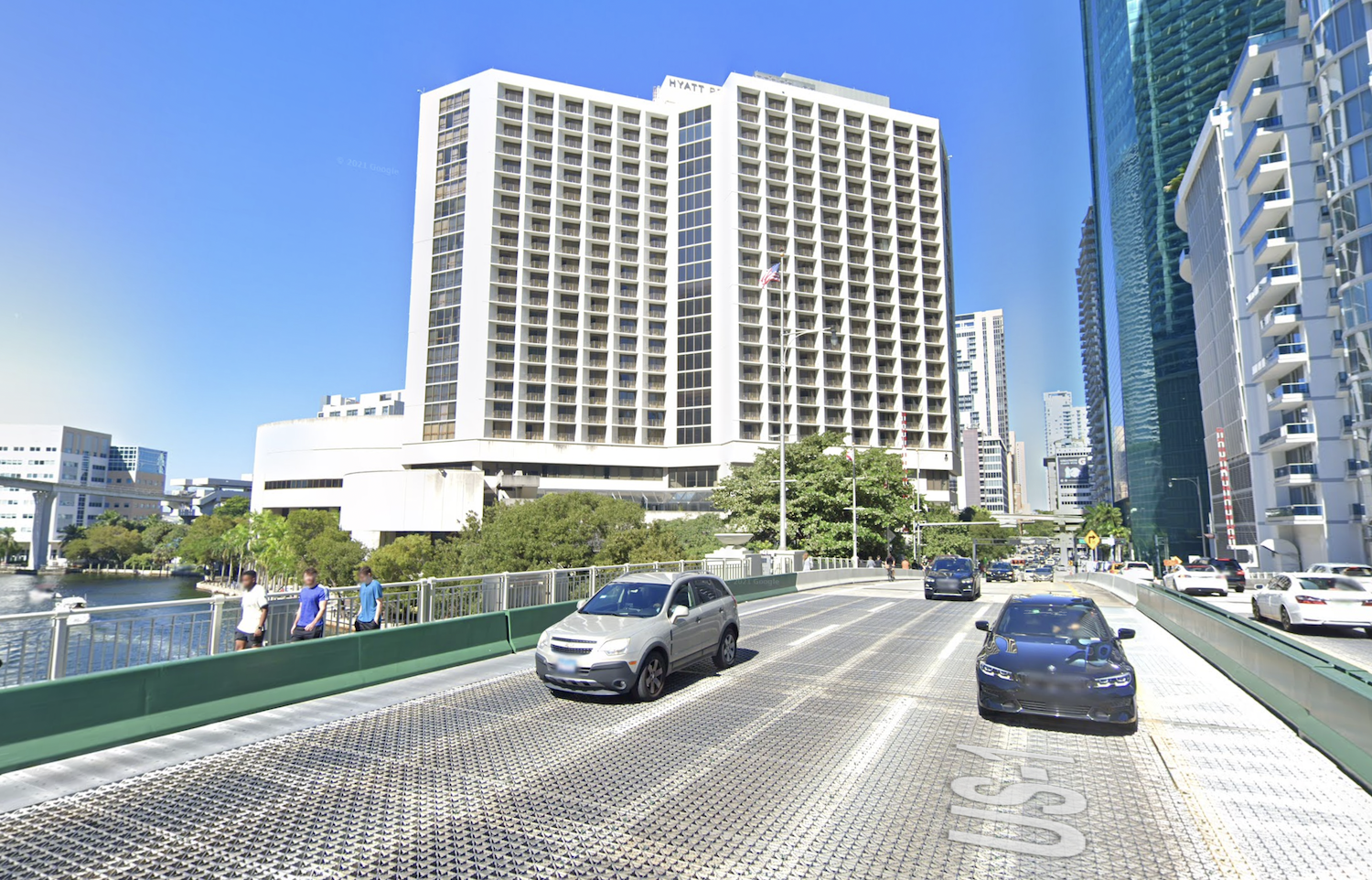 The proposed redevelopment seeks to amend and restate the ground lease that ushered in development of the existing Hyatt hotel in the early 1980s to include, without limitation, an extension of the lease renewal term from 45 to 99 years. This summer, Hyatt and Gencom will ask the City of Miami Commission to place a referendum on the November 2022 ballot asking voters to approve the revised ground lease and the proposed development. If approved by a majority of voters, construction on the Hyatt Regency Miami site is expected to begin in 2025.