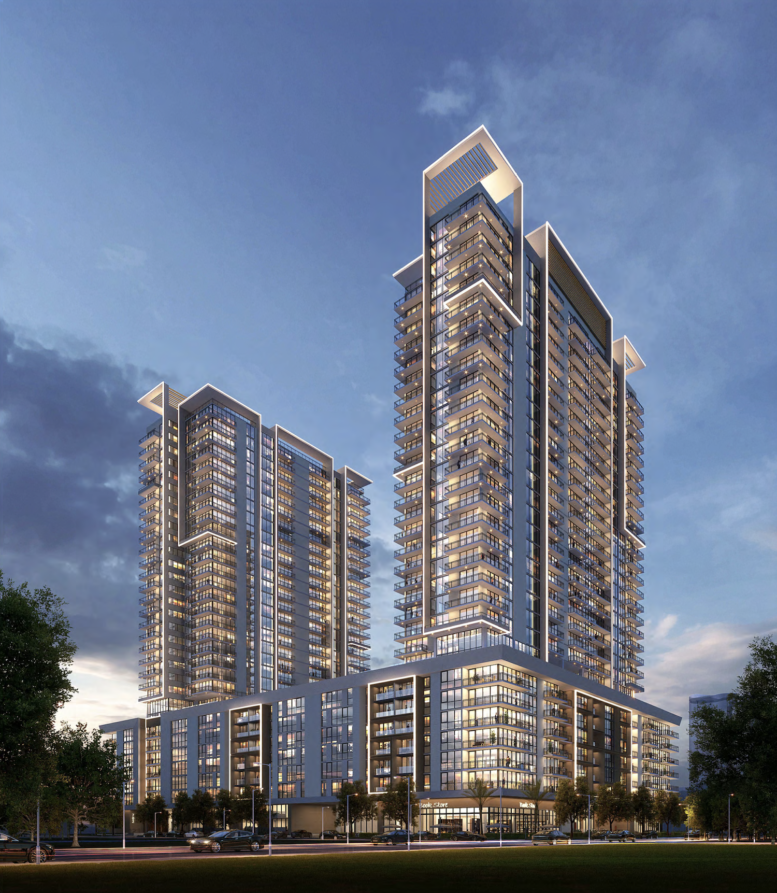 Site plans have been filed for The Benjamin, a 30-story, tw0-tower mixed-use development proposed for 777 Southeast 3rd Avenue in Downtown Fort Lauderdale. Designed by FSMY Architects + Planners for New York-Based developer The Benjamin Companies, the massive 1,170,112-square-foot superstructure would top off at approximately 341 feet and yield 542 residential units, 13,764 square feet of commercial space and 801 parking spaces. Architectural Alliance Landscape is serving as the landscape architect, Botek Thurlow Engineering is the civil engineer and Michael S. Wiener is the land use attorney. Fort Lauderdale’s Development Review Committee will consider plans for The Benjamin this upcoming Tuesday, August 23rd. 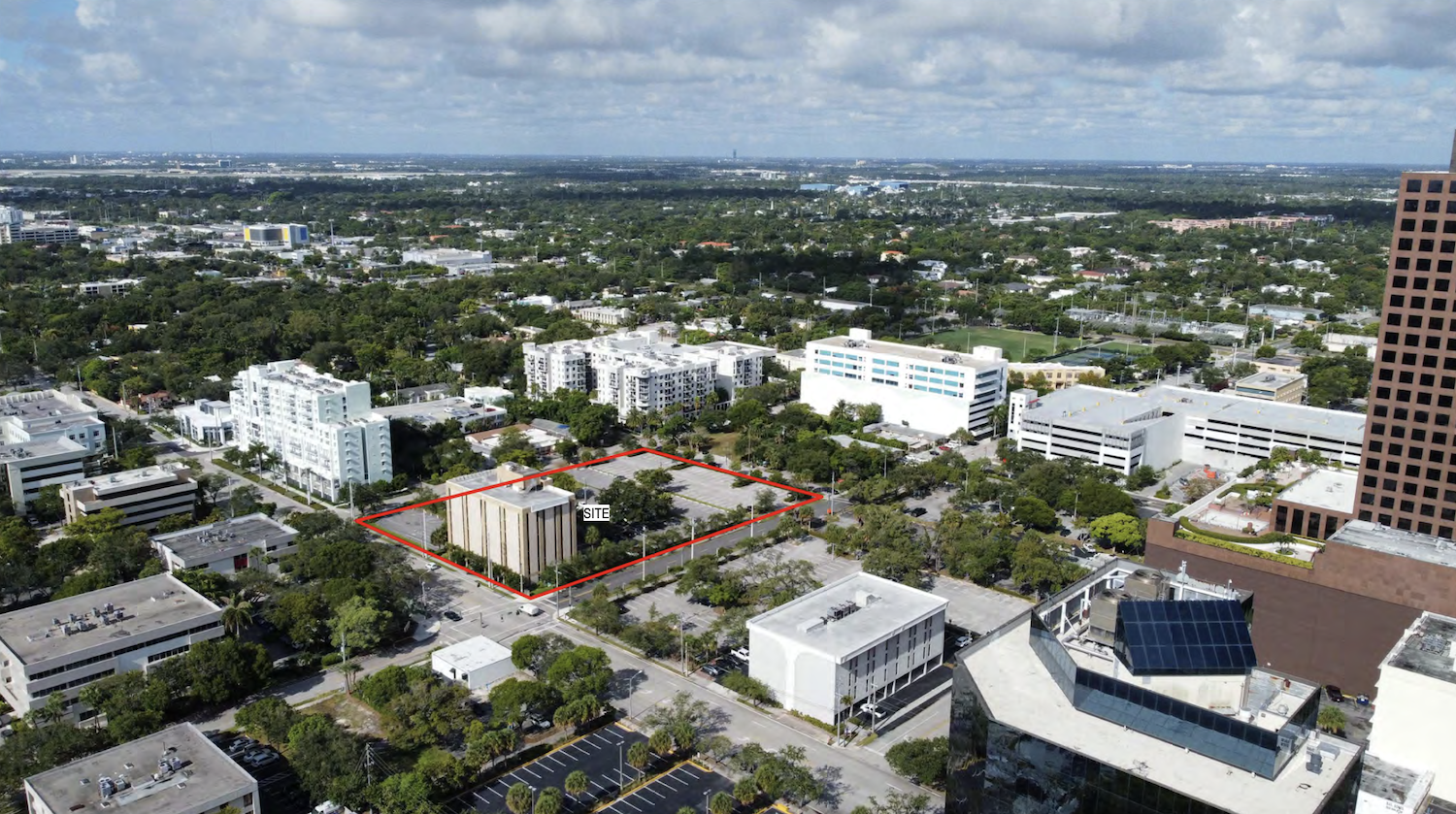 As per the project description, the design from FSMY Architects + Planners complies with all of the Downtown Masterplan Guidelines, Local Streets Guidelines and Neighborhood Compatibility Guidlines . Renderings spotted by YIMBY in the site plan filing depicts the 30-story project heavily articulated with folding elements, modulated elevations of fine textured stucco finishes and open balconies, corners marked by wrap-around balconies and floor-to-ceiling glass. The white painted folding elements and concrete frame break down the massing and scale of the structure. The towers sit atop a 7-story podium, which is designed to compliment the scale and texture of neighboring projects, finished with a blend of grey brick, exposed concrete, smooth finished white painted stucco, decorative horizontal wood cladding and clear glass + aluminum storefront systems at the street level, with varying fenestrations blending those materials between floors 2 through 7. The 6-story parking component is screened from the public due to residential units wrapping around the perimeters of the podium. The rooftop mechanical screen is completely integrated into the design, effectively adding drama to the skyline. Renderings below provide multiple perspectives of the proposed design. 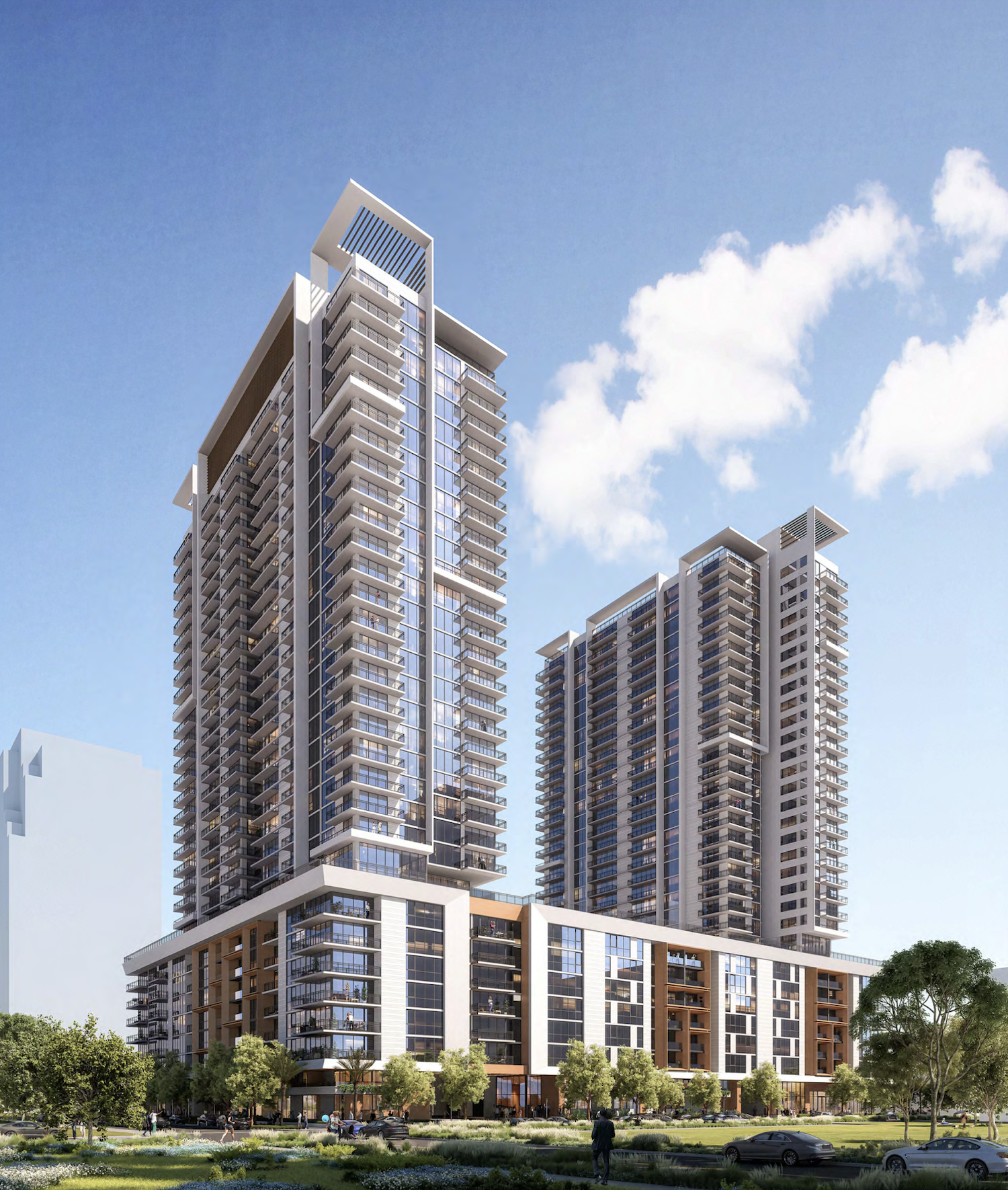 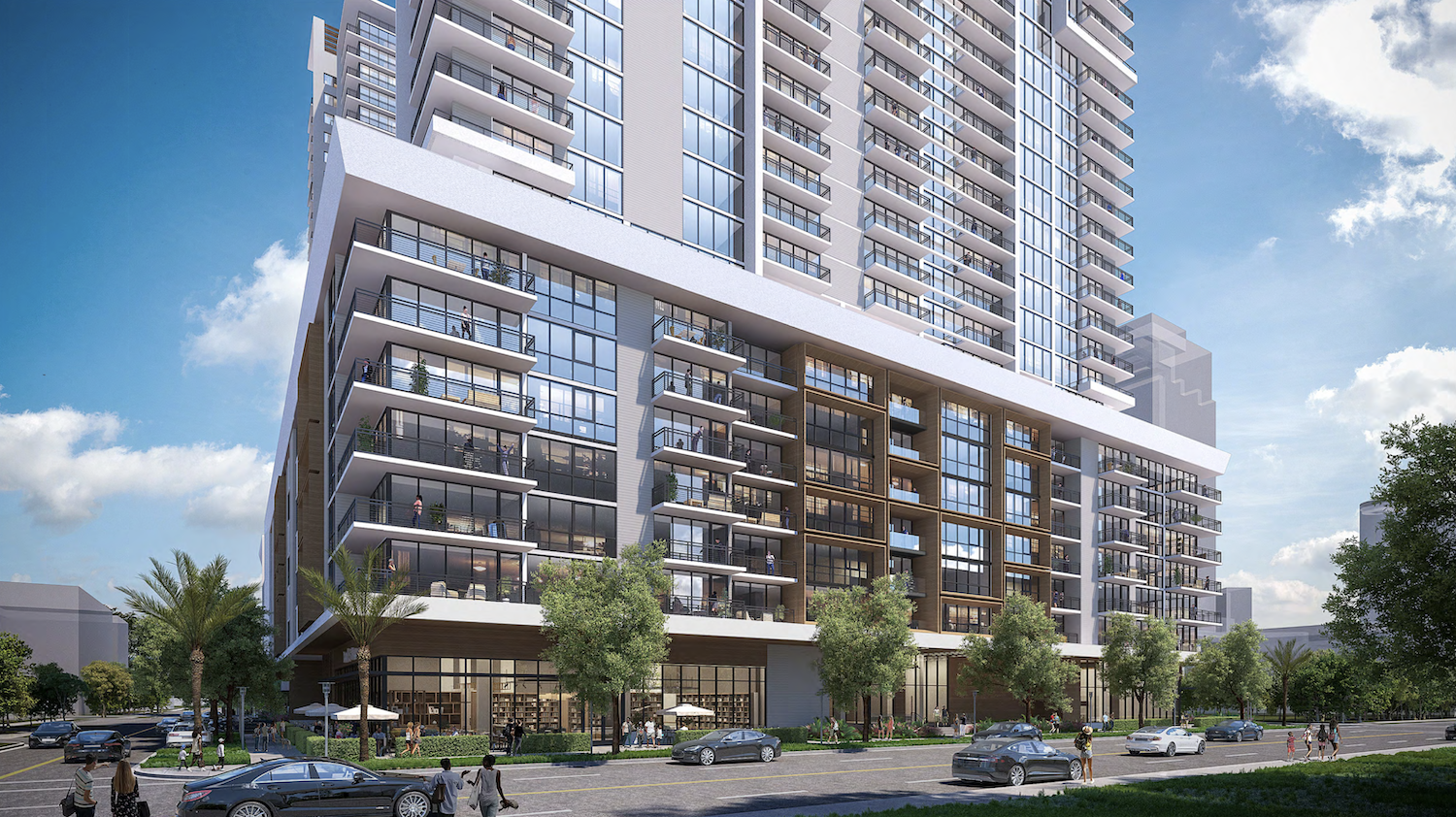 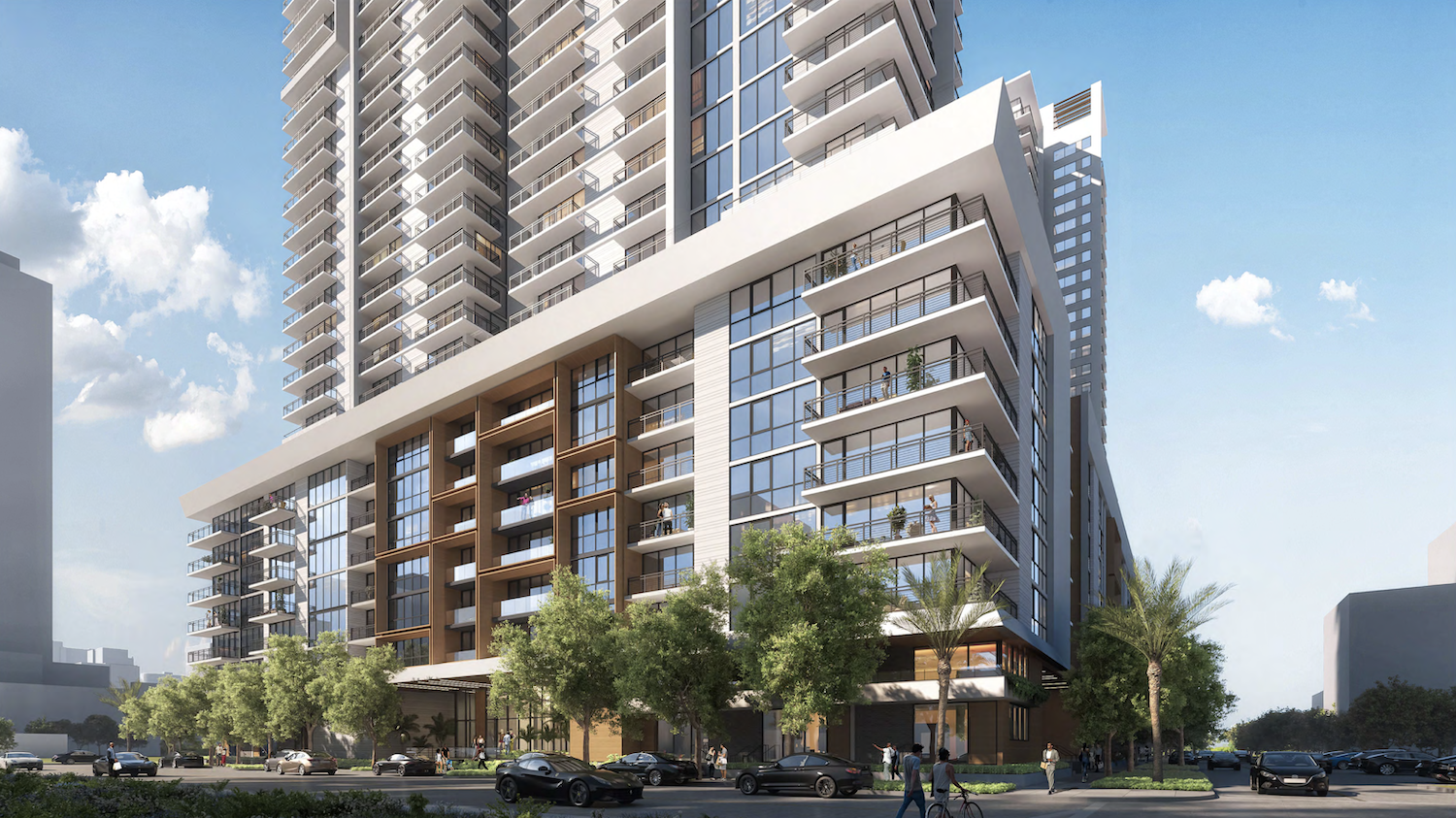 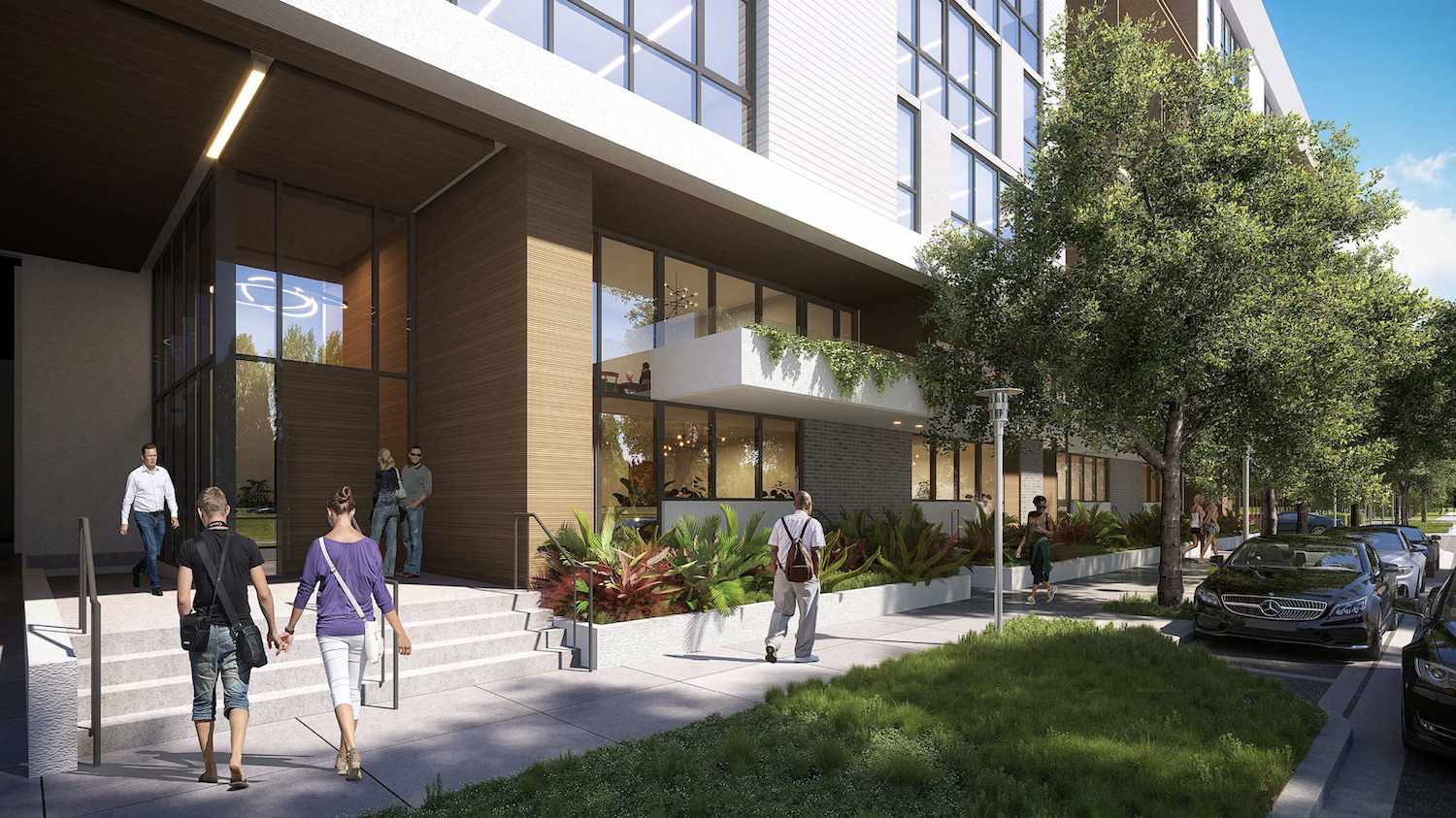 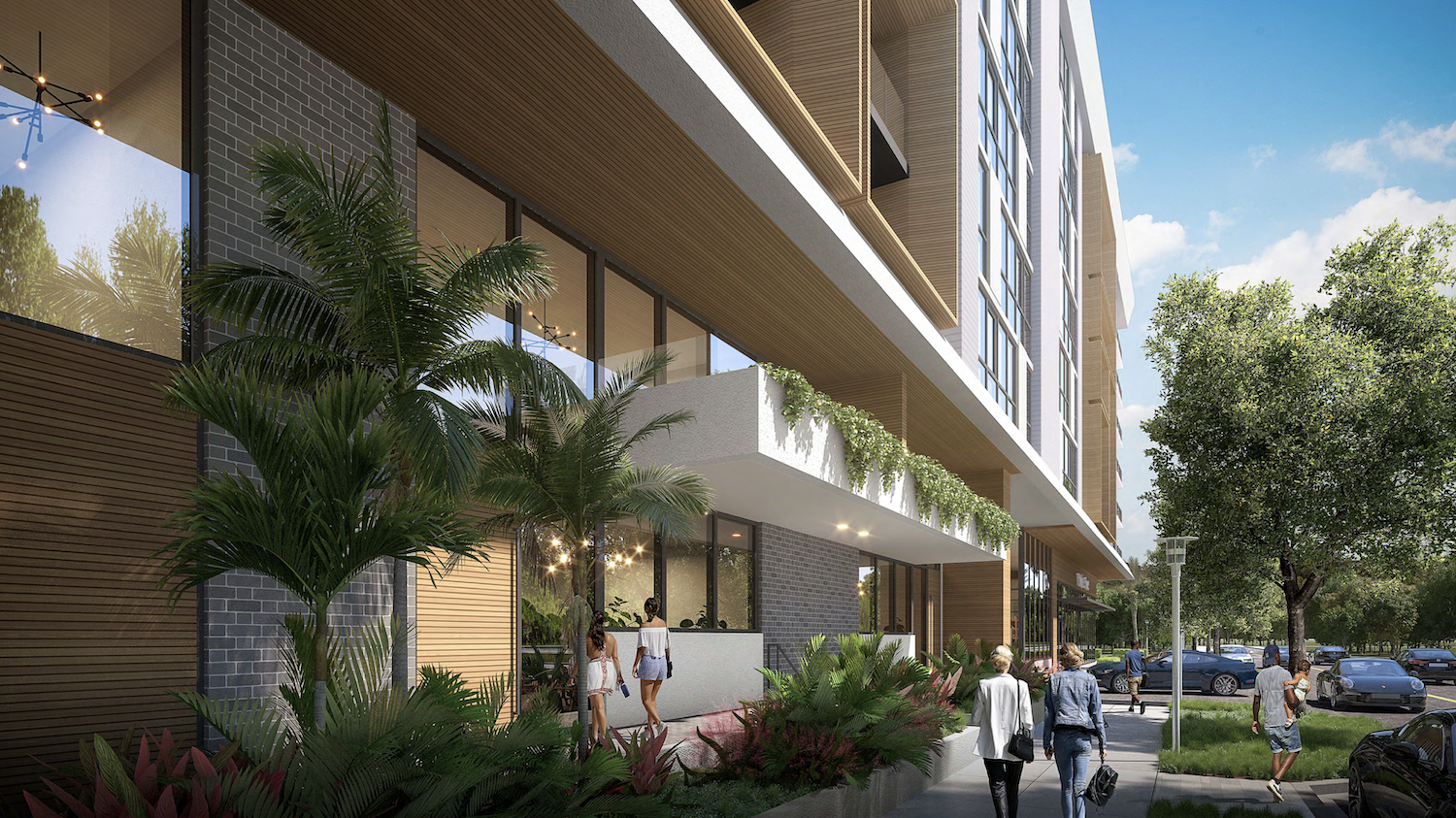 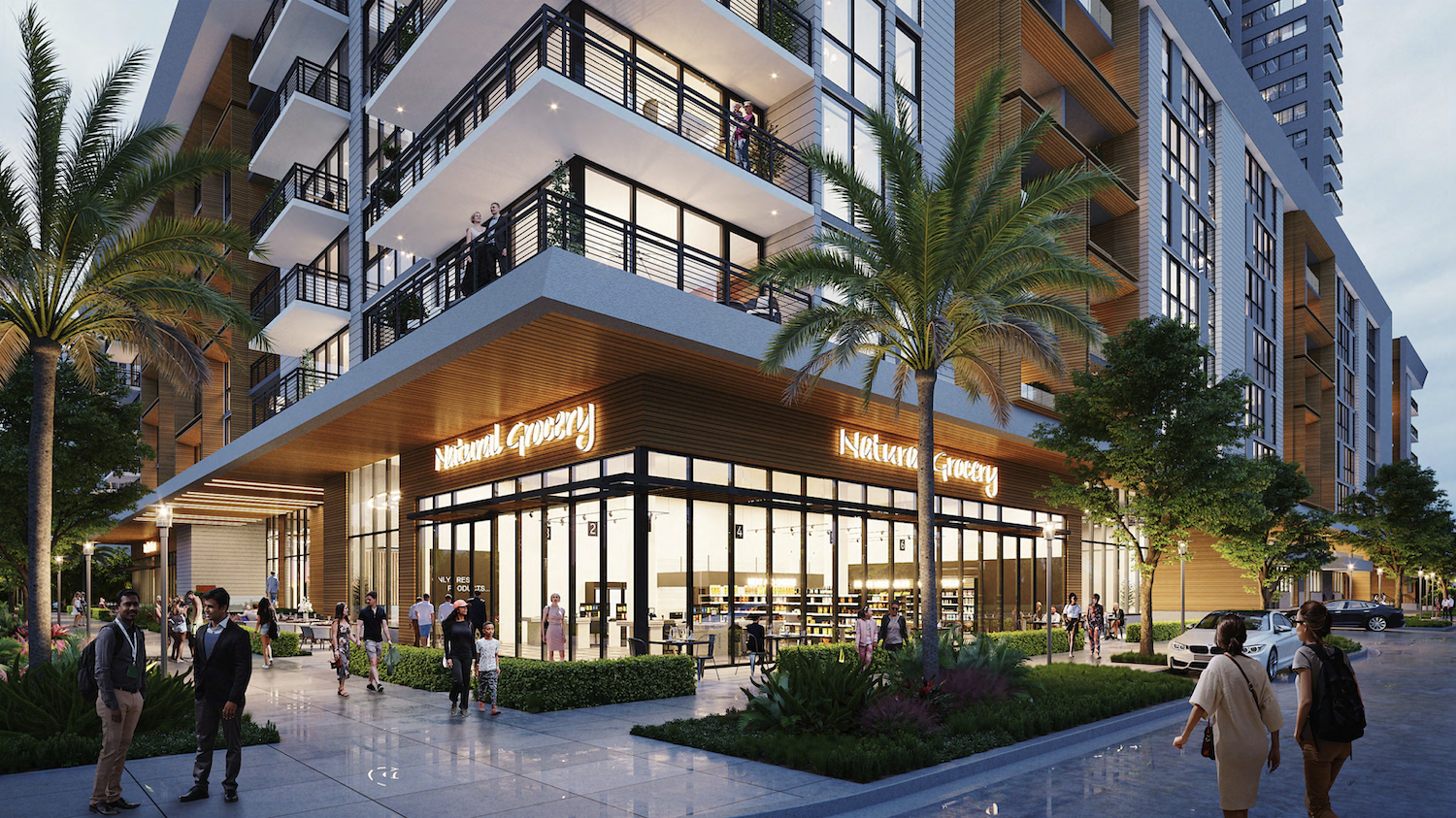 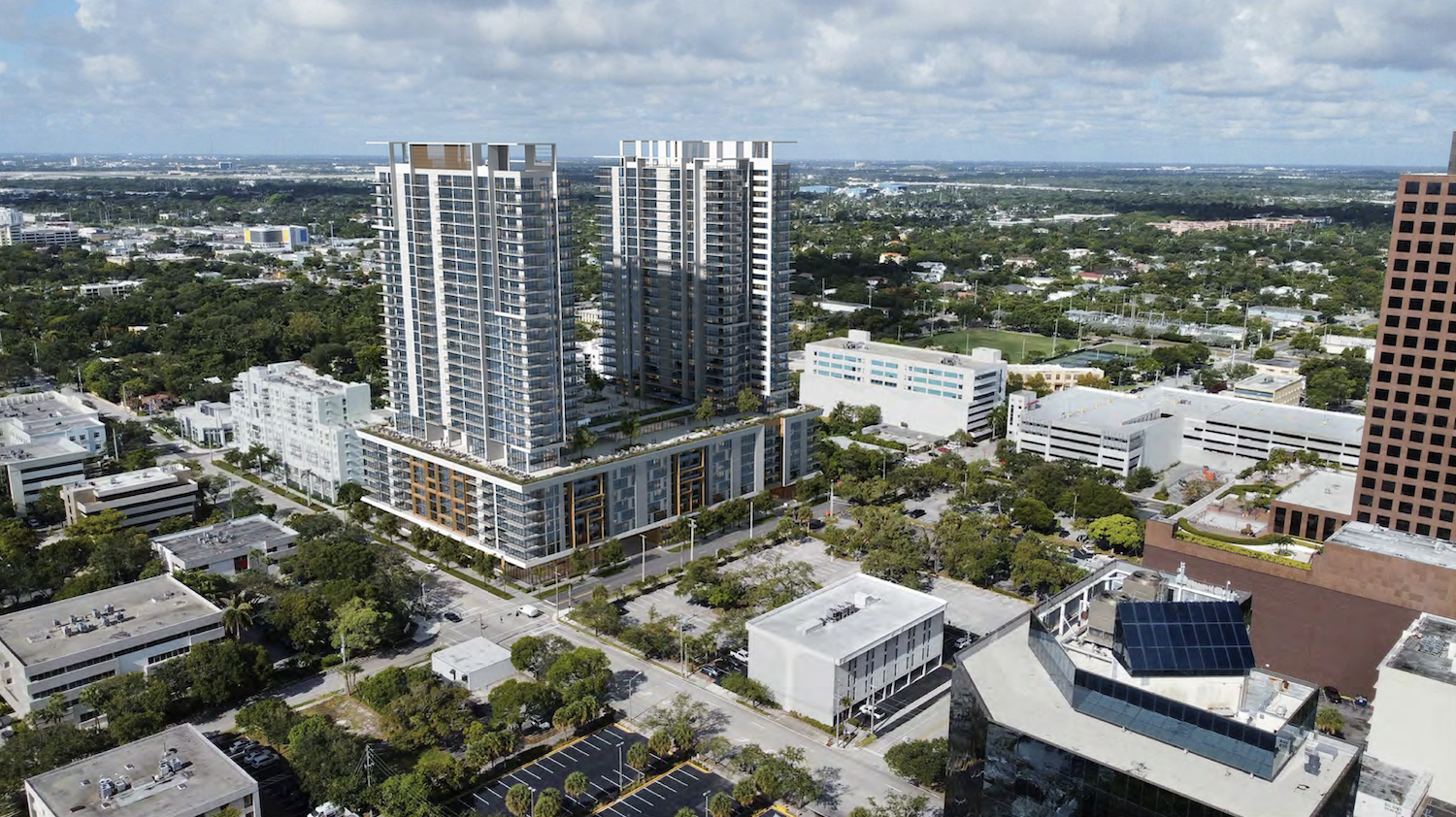 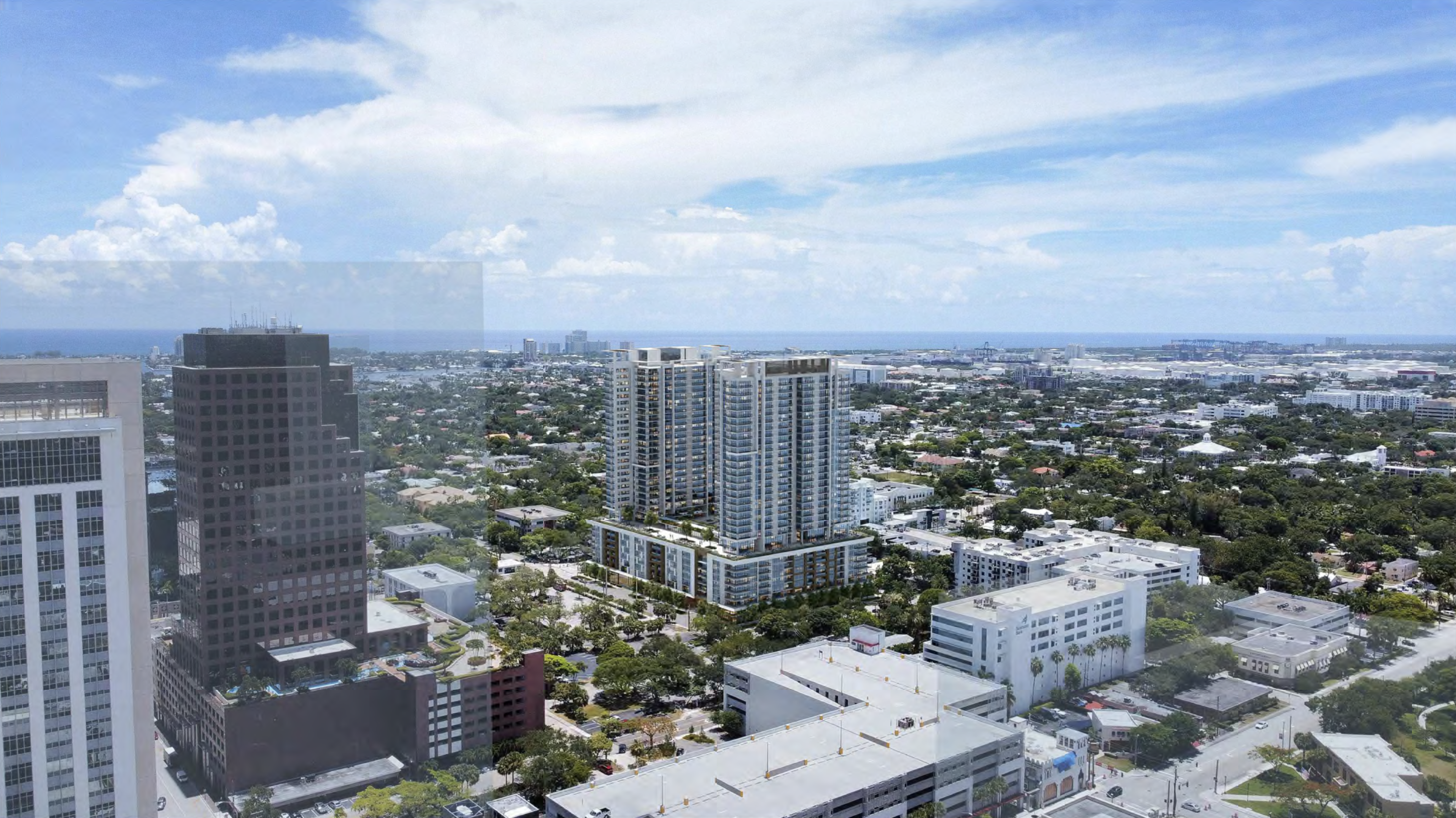 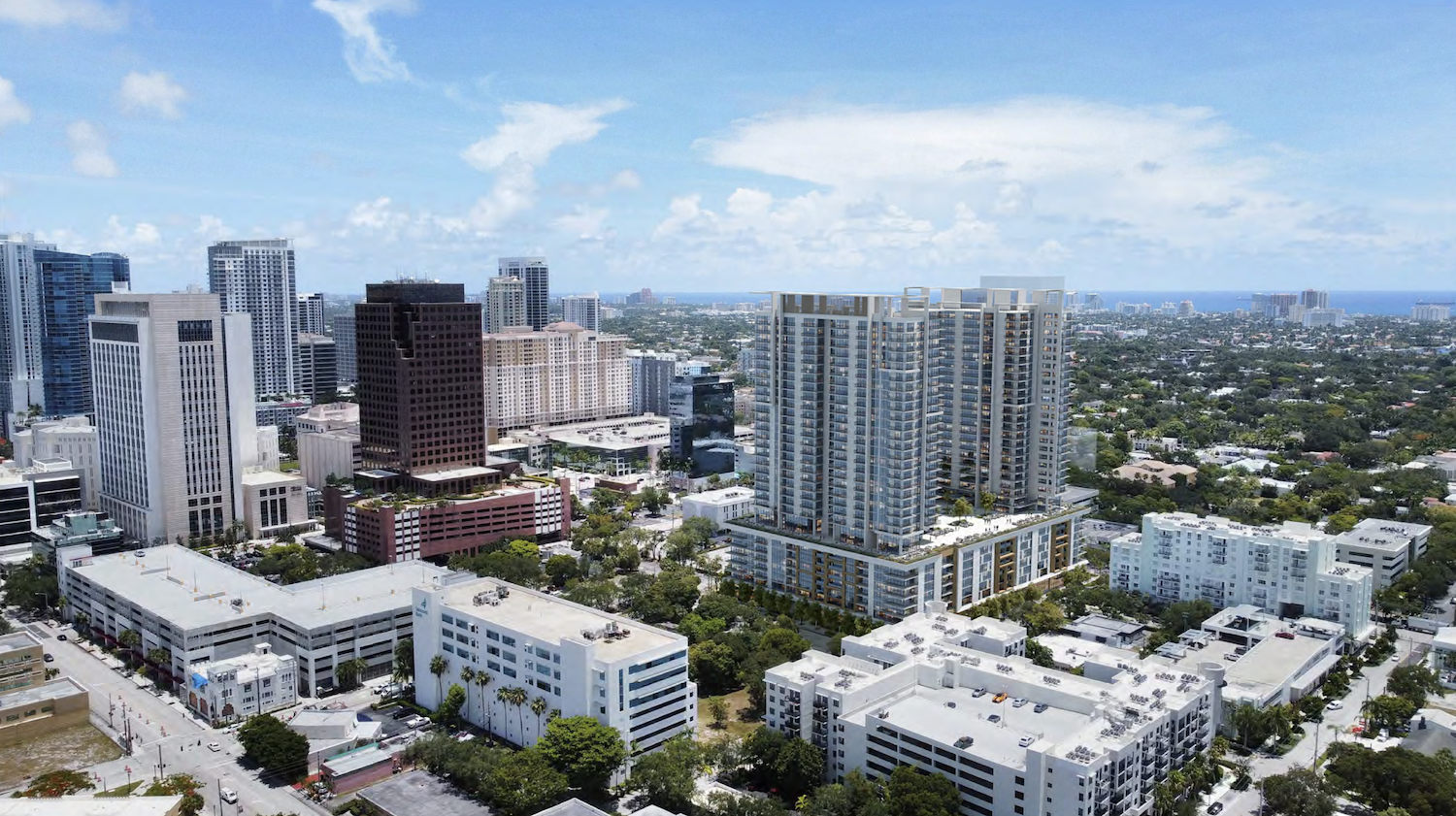 Residential units would come in a mix of studio, one-, two- and three-bedroom floor plans, which would offer generously sized spaces ranging from 648 to 1,582 square feet. A landscaped amenity terrace would sit atop the parking garage on the 8th floor, fit with a pool and lounging areas.

Existing conditions on the development site include mostly grade-level parking, 34,322-square-foot office building and a Centennial Bank branch. If The Benjamin is approved, these improvements would be razed to make way for the new mixed-use complex.