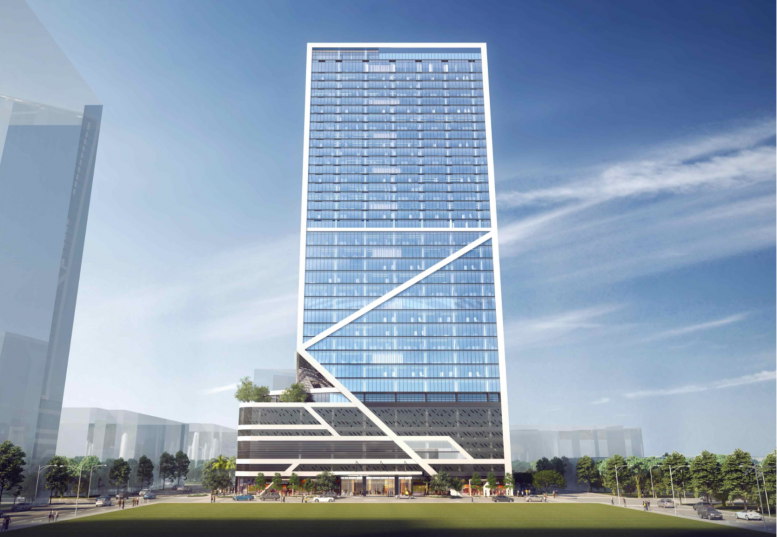 The Federal Aviation Administration has received applications for Miami Station, a 41-story mixed-use building planned for 525 Northwest 2nd Avenue in Miami’s Overtown District. The tower has been submitted seeking approvals to rise 539-feet, or 546-feet above sea level, a significant increase from the previously reported 459-feet seen in the most recent UDRB application. Designed by ODP Architecture & Design and developed by the Related Group, the project is expected to yield 752,859 square feet including 200,234 square feet of office space, 309 residential units, 8,508 square feet of retail space and a parking garage for 510 vehicles. The FAA application was filed on November 9, 2021.

The interior lots that make up the overall development site span a combined 45,000 square feet, including the address of the 5-story unfinished and abandoned parking garage at 530 Northwest 1st Court that’s set for demolition, and the two vacant parcels at 525 and 533 Northwest 2nd Avenue. The building will ultimately be bordered by a Public Storage along Northwest 5th Street on the south, and 3 MiamiCentral along Northwest 6th Street on the north. MiamiCentral’s transportation hub is the nearest form of public transport, providing access to the Metrorail and Metromover as well as Brightline high-speed rail within walking distance.

It is unclear whether the projects floor-count and known dimensions will change due to the 80-foot increase in height, but it’s not impossible. Assuming the FAA approves the height, we could see additional floors added to the tower, or even taller ceiling heights. As mentioned in previous articles related to Miami Station, the superstructure is depicted sporting a glass and metal-clad facade, anticipated to make an architectural statement in the neighborhood with it’s diagrid framing and uniquely perforated podium.

Residential units are expected to come sized in studio through three-bedroom configurations, as as well as penthouse units, all ranging between 460-to-1428 square-feet. Residents will have access to several amenities including a rooftop pool and landscaped deck, a dog park and several outdoor terraces.

The Related Group filed a notice of commencement on October 20th stating they will begin to demolish the structural remnants of the unfinished Logik office tower that was canceled following the recession of 2008; BG Group is listed as the demolition contractor at the cost of $1523,900. However, the demolition permits remain pending according to the Department of Buildings.

B+J Consulting Engineers is listed for structural engineering; Feller Engineering is the MEP Engineer; Dixie Landscape has been selected as the landscape architect, and the exterior and finishes will be handled by Facade+Envelope.

Currently, there are no official schedules for construction or ground breaking for the new tower, but YIMBY predicts demolition will wrap up some time towards the end of the year assuming permits are approved relatively soon. Site work and excavation may commence early 2022, with a completion date around the end of 2023 or early 2024.

Photographs by @mchlanglo793 show construction on