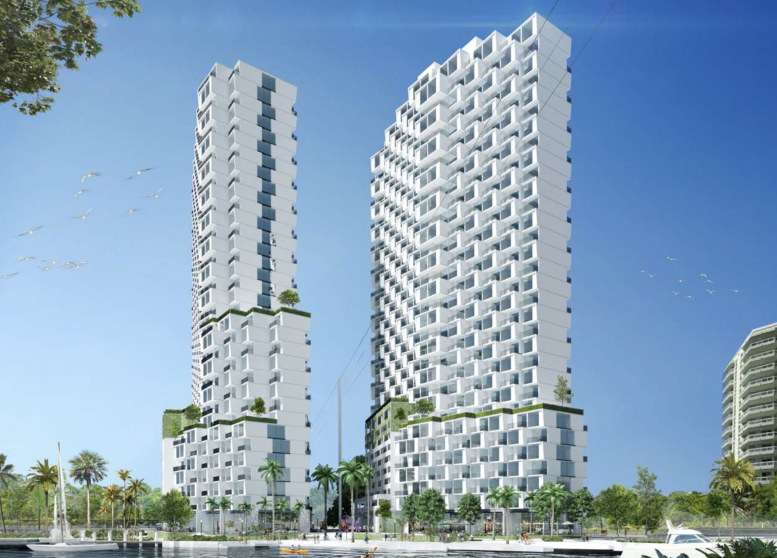 Fort Lauderdale has seen an influx of construction projects come to life in recent years; a construction boom cycle so to say. And developers have wasted no time in taking advantage of lucrative opportunities to build as the migration of people to South Florida has created favorable real estate market conditions. One of the epicenters for development has been within the downtown waterfront limits of the Las Olas and Tarpon River neighborhoods, right along the New River. It is here that developer Cymbal Development is looking to redevelop a piece of historic property, on the south bend of the river bank.

Owner Asi Cymbal has partnered up with PALMA, currently pursuing the new Joint Government Center In Fort Lauderdale, to redesign a proposal for 408 Southwest 4th Avenue; a two-tower mixed-use development thats set rise to 32 and 35 stories tall. The property is currently home to a century-old African rain tree; one that’s been protected and preserved for quite some time, canopying over the park grounds as far as 125-feet. Contrary to most underdeveloped sites, Cymbal has chosen to continue the preservation of the tree and build the towers with respect to it. 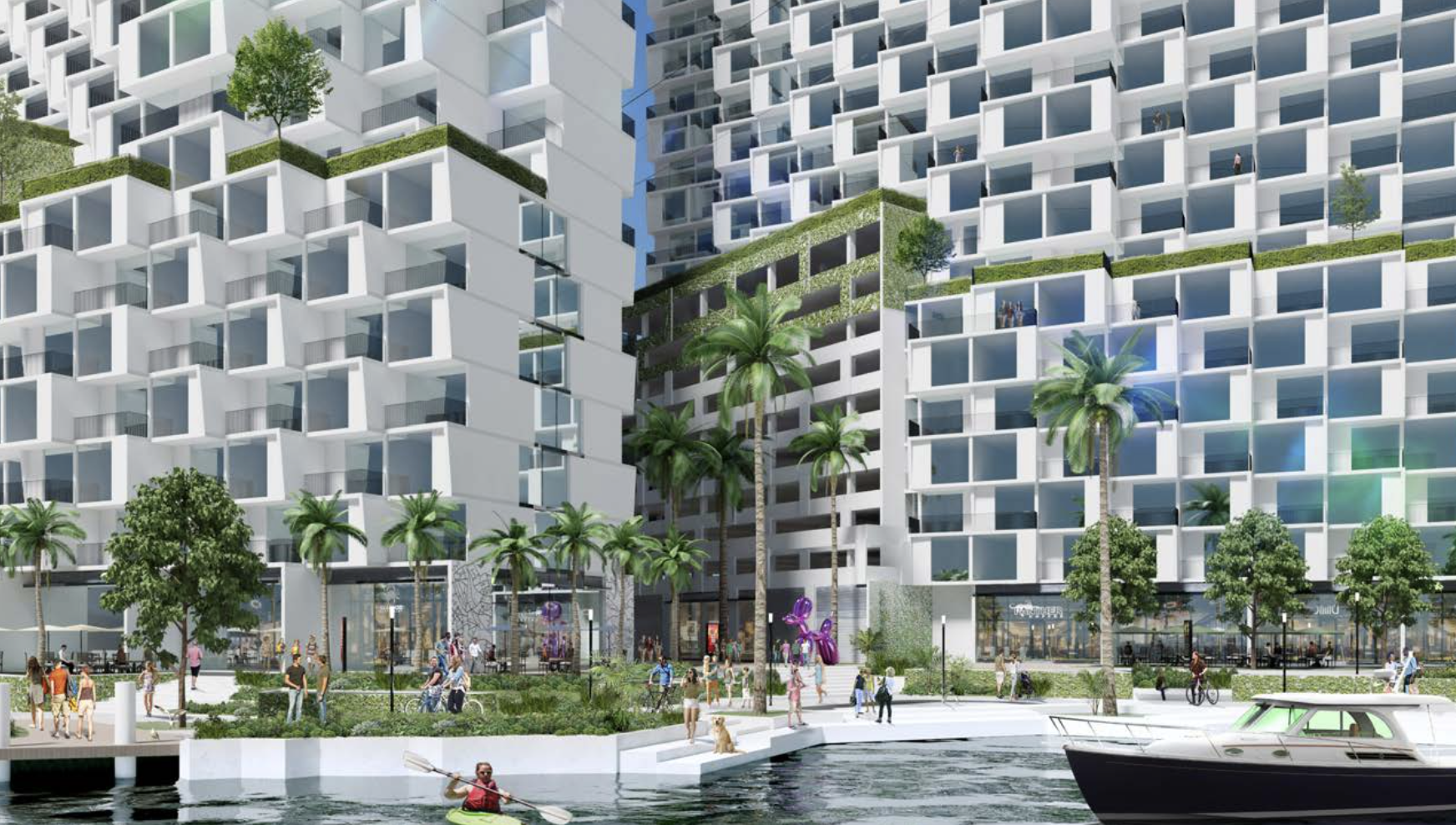 Bounded by SW 4th Ct. to the south, SW 3rd Ave. to the east and the New River to the north, the proposed towers could yield up to 1.89 million square feet spanning across 784 residential units – split between 434 units in the east tower and 350 in the west tower -, 18,243 square feet of retail spaces, up to 818 parking spaces, encompassing a 2.42 acre site. A public walkway between the two structures will lead to a destination experience with public art, restaurants, water features, an amphitheater, and a dock with a potential water taxi stop. 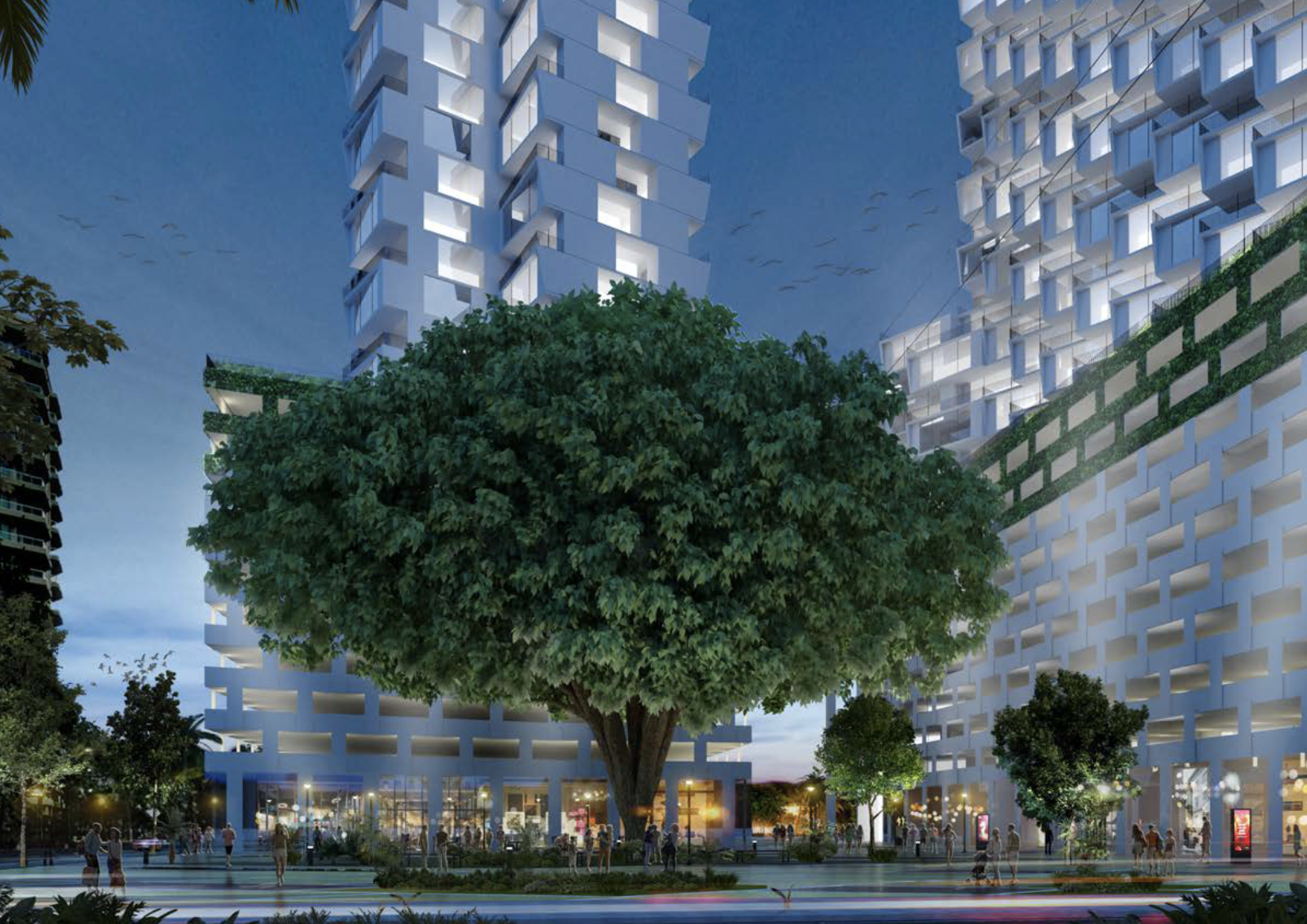 This project was once known as Marina Lofts, a proposal met with a public outcry due to the plan to remove the old tree, and it featured designs from Bjarke Engels. The new proposal officially goes by the name Raintree Riverwalk Residences, and the renders by PALMA reveal a staggering design language that aims to pay respects to the century-old tree, incorporating gardens and greenery. The tree will remain in place for future residents and visitors to come see. The design features two multi-dimensional structures decorated with stacked balconies atop multi-story podiums, all likely clad in white stucco. One of the most notable aesthetics of the new design are the recessed and cantilevered rectangular forms, incorporating both the windows and balconies. Each vertical row of rectangular forms sets back along the perimeter walls, which is for the most part what gives the buildings their character.

The project is still in the planning stages, but if approved, we can see ground breaking for the site soon after.